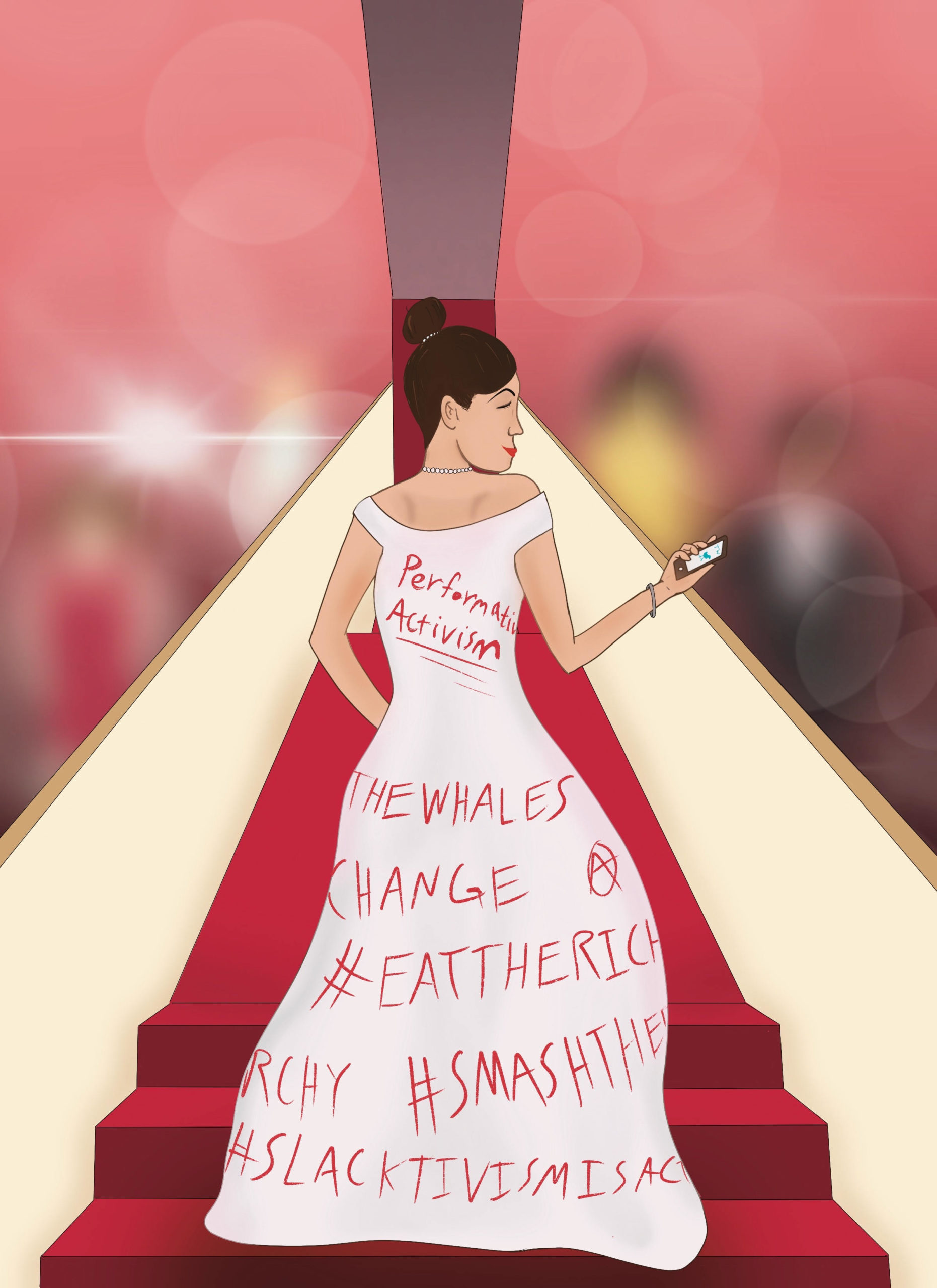 Performative activism typically entails fruitless and pointless actions from celebrities and influencers that take away from the voices of people with less social or political influence and overshadow their initiatives. This type of activism puts on a façade for people to show that they care about an issue but does nothing to actively aid the cause.

As the youngest female member of Congress, AOC has increased her popularity through her active social media presence, serving as a voice for the younger generation. A politician turned influencer, AOC has a total of 8.7 million followers on Instagram and regularly uses her platform to inform followers on policy changes she’s working on implementing.

While AOC does use her platform to promote awareness and is a figure who doesn’t just talk the talk, there is a sense of irony in her wearing a white dress with the statement “Tax the Rich” streaked on it.

AOC’s political viewpoints rally against elitism, yet she’s gaining social clout from her statement dress at the Met Gala – an event revolving around elitist celebrities. The issue isn’t solely her interaction with celebrities but specifically her voluntary affiliation with rich public figures such as Lauryn Hill – who has a history and means of avoiding taxation – all while wearing that dress. It’s ironic that political opponent Ben Shapiro could take the high ground here, stating on Twitter, “Actual revolutionaries eat the rich. They don’t eat cake with the rich, then declare their virtue by wearing a shirt saying ‘eat the rich.’” AOC’s dress was on display for elitists who will continue to do nothing to support progressive tax reform.

While people can argue that her remark raised awareness, the statement only further publicized the Met Gala as tax reform took a back seat to celebrity fashion choices.

Performative activism isn’t only seen through the actions of celebrities and public figures but regular people as well. A prominent example is when people posted black squares on social media to “support” the Black Lives Matter movement.

While it is important to raise awareness, it is perhaps more important to participate in activism that directly benefits the cause. Instead of reposting black squares, some better alternatives would have been to support African-American-owned businesses, get educated about systemic racism throughout our nation’s history or join a protest.

Another example of performative activism is when businesses use pride and LGBTQ+ history months to make a profit. Popular companies often use this month of October to market rainbow-colored products and draw more attention to their brands rather than raise awareness for the cause. Adidas promotes a Pride Collection each year with rainbow-colored apparel but doesn’t do anything to actually benefit the LGBTQ+ community. Instead of focusing on how to increase profit, companies could increase diversity training within their workplace or donate a portion of their profit to LGBTQ+ institutions.

Some may argue that AOC’s stunt acted as a slap in the face to the rich figures at the Met Gala who use the current tax code to their benefit. But at the end of the day, AOC’s statement – like so many others – has done nothing to aid the cause.

Performative activism promotes false advocacy, which consists of stunts that do nothing more than show the world you supposedly care about a cause. Instead of posting black squares on social media and only raising awareness for the LGBTQ+ community during Pride month, let’s attend and lead protests, volunteer to lobby for Congress, boycott companies with unethical practices and genuinely use our time and voices to make a difference.