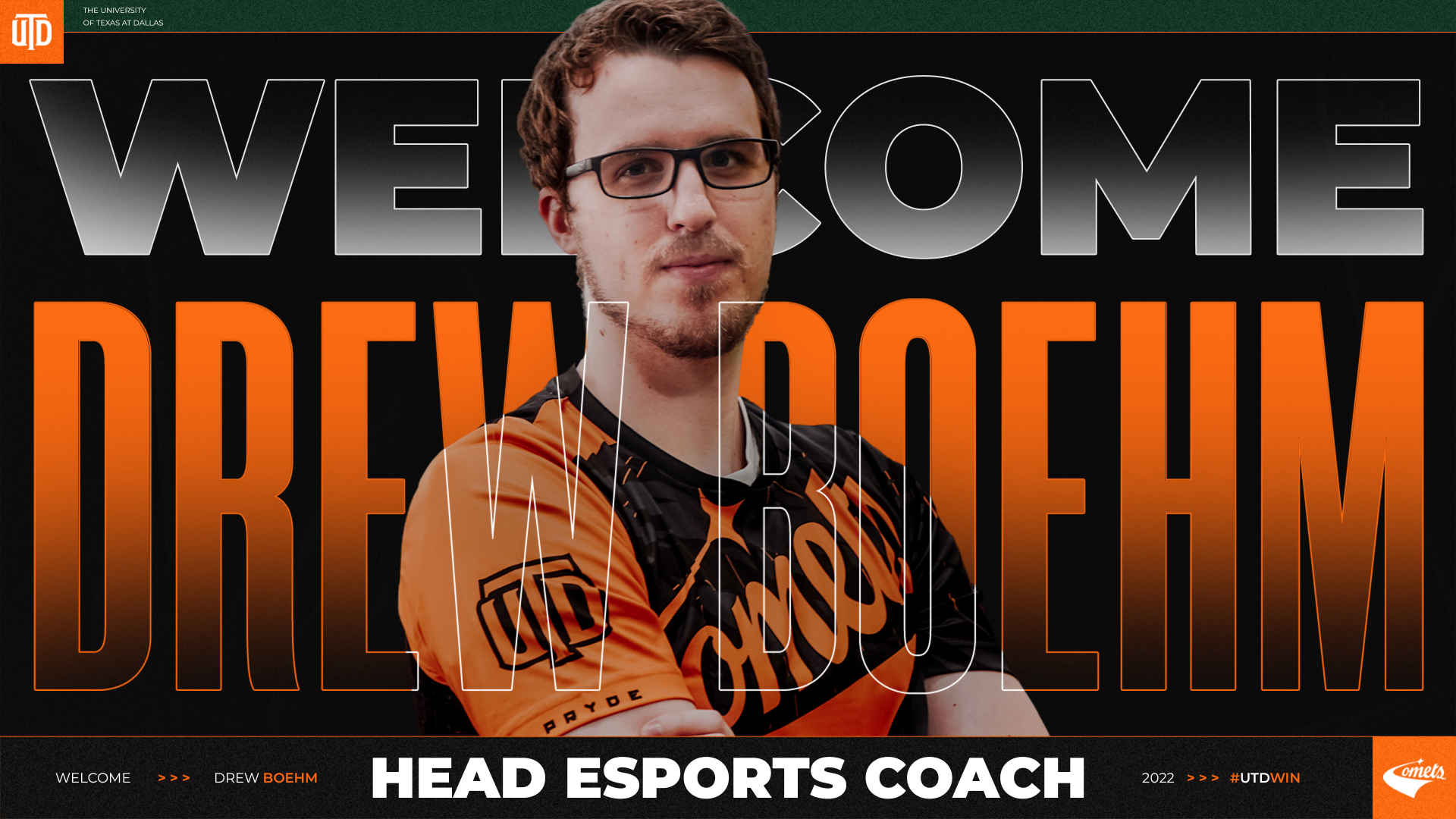 Boehm was officially announced as the new Head Coach in a press release by UTD Esports on Tuesday, Feb. 1. | Photo courtesy of UTD Esports

After a stint being student-run following Greg Adler’s departure, the UTD esports team has hired on a new head coach for the program.

Drew Boehm is the newly hired head coach of the UTD esports team. A TCU alumni, Boehm was originally interested in law enforcement before a crop of collegiate esports jobs rose up and he applied for a few of them. After heading a private program in Kansas for a year and then spending a few years as UT Arlington’s assistant director of esports, Boehm said he was attracted by the success of the program and the school in the field.

“It’s been awesome seeing the success and seeing how well everything has gone, and I’m really passionate about this kind of stuff,” Boehm said. “It was just a culmination of a lot of factors, but the program and the school, [I] definitely love it.”

Besides being interviewed by the university, Boehm was interviewed by a panel of some of the current student leads on the team, including ITS senior and main Overwatch tank Luey Salinas. One of the things that stood out to Salinas about Boehm was an alignment between Boehm’s and the program’s goals. Boehm himself said that satisfaction and enjoyment alongside academic success was part of his goals for what he wanted students to gain from the esports experience.

“I want the program to be a really fun place for everyone involved. I’m of the philosophy that if people enjoy what they’re doing and enjoy being involved, everything kind of comes naturally afterwards,” Boehm said. “If the students are happy being there and having a good time, the winning and all the other cool stuff that comes along will just naturally come.”

That’s not to say that hard work and dedication is not part of being in the program, but Boehm said that he’s excited to work with the program in multiple facets, and he aims to increase the number of community events as well (pending COVID-19 restrictions). From community tournaments to local intercollegiate LANs, Boehm said that he was excited to see the kind of events that the team could put together for the community at large.

“You could probably find a place on campus that would work really well to hold a tournament or even a conference. It’d be really cool to get into that kind of stuff where you have guest speakers come and some tournaments and other things going on altogether,” Boehm said. “The community is kind of the backbone of the program in a way where they’re your biggest fans. You might get a lot of recruits as students come and go, people who watch you play and are your biggest fans may want to try out and stuff like that.”

Improving community engagement goes further than just holding events and giveaways. The esports room is currently locked for use mostly by the members of the team, as well as select other content creators and staff. A priority for Boehm is not only to hold more events but eventually to also have a more public space for gamers to gather.

“One thing I’d love to try is to get more of the public engaged … we have this esports space but it’s pretty much just for the team,” Boehm said. “It’d be really cool to expand and end up opening a public gaming space on campus. We’re also planning on working on a broadcast studio for students.”

This broadcast studio is an expansion of the existing broadcast team in the program. Previously, if production was not done remotely, it’d be done in the small office of the head coach with shoutcasters yelling into the Blue Snowball microphone connected to the office PC. But with plans to convert a nearby conference room into a dedicated broadcast space with professional equipment, Boehm hopes that team’s content creation capabilities will be improved.

“Not only can you have a nice ‘it’s always there’ kind of space for your broadcast students, you can obviously use it for other content creation projects, too. Not only are you streaming matches, but you might be able to do whatever kind of shows that you want,” Boehm said.

Coming into the program, Boehm was overwhelmed by the amount that students handled for the general operations of the team. With longtime coaches and support from student workers and volunteers, UTD esports already had an infrastructure in place for setting up scrims, planning events and heading to competitions. At previous programs, Boehm had to do much of this work himself, and he said that he was excited to work with what UTD now had to offer.

“It’s kind of cool coming into this program where there’s already such a rich history and an [extremely] passionate group of students,” Boehm said. “It’s been awesome so far, just being able to work with these students who are some of the most passionate I’ve ever seen, which obviously will help make my life easier and then just makes everything more exciting because there’s so much going on.”