After being promoted to Athletics Director, Angela Marin is looking to continue to focus on program diversity and student needs. 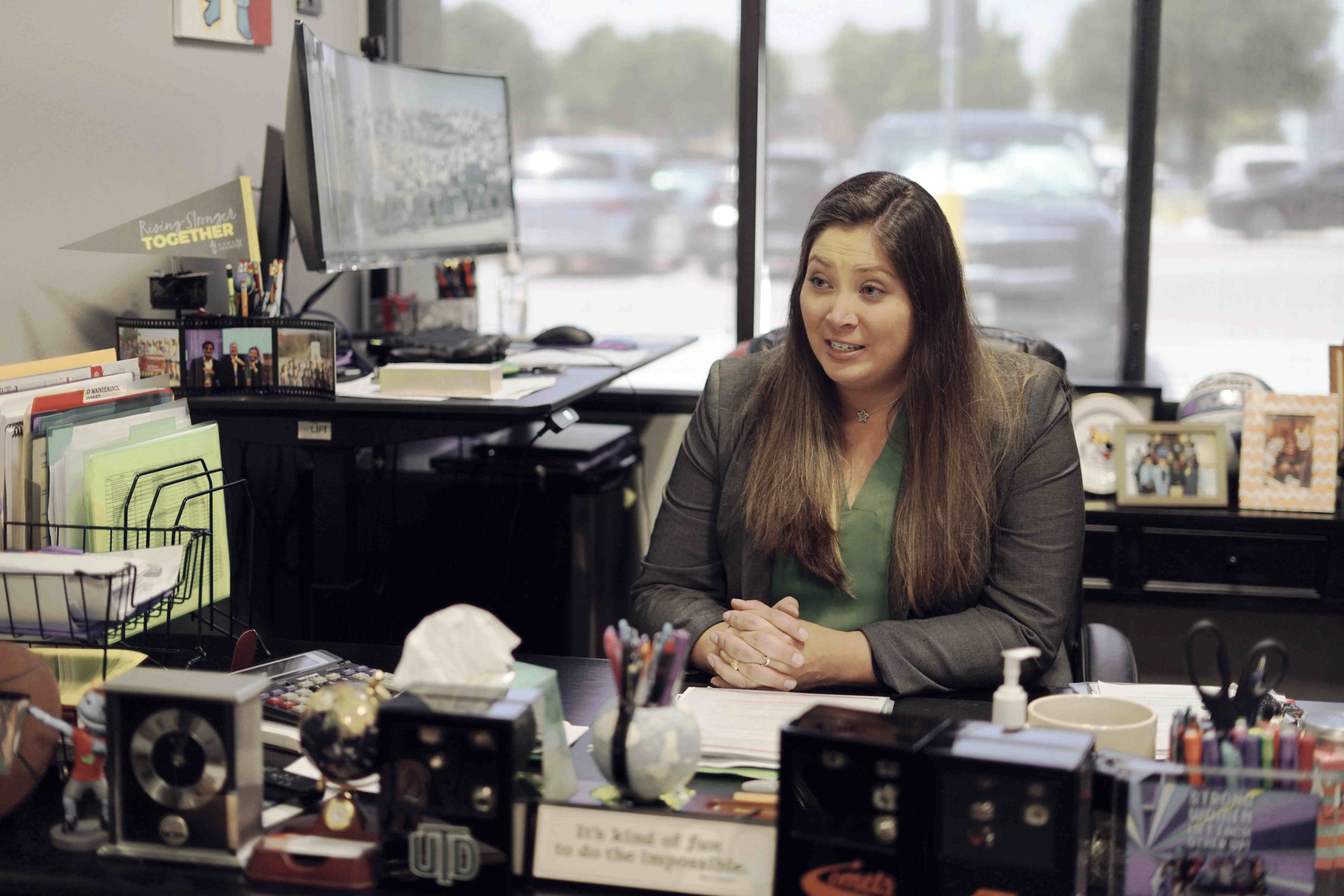 After being promoted to Athletics Director, Angela Marin is looking to continue to focus on program diversity and student needs. Tatwik Bodepudi | Mercury Staff

Angela Marin made history for the second time this June when she became the first Hispanic woman to become an Athletics Director in NSDA D-III.

She first made history in fall 2021 when she was chosen as UTD’s interim AD after Associate Athletic Director for External Affairs Bill Petit stepped down from the role.

Marin, who’s been with the University’s athletics department since 2012, has more than 15 years of experience under her belt before her promotion, she served as UTD’s Associate AD and Athletics’ Director of Compliance, coached basketball and volleyball at the University of New Or- leans, and had a stint as a student worker in Texas A&M’s basketball program, where she gained a passion for athletics.

“When I was in New Orleans, my head basketball coach became the Athletics Di- rector, and that was the first time working in college athletics that I saw a female in this position,” Marin said. “That lit a fire within me. From that moment, I knew I can do this. I can be the next one. Athletics is a male-dominated industry. We look at our females of color and we’re unicorns in this business we don’t exist. And so that became my charge to break those barriers and be in that position one way or another.”

Vice President of Student Affairs Gene Fitch, who appointed Marin as AD, said her unique familiarity with Division III athletics, her work with the Student Athlete Advisory Council, and her impressive leadership experience with UTD Athletics and students make her perfect for the role.

“She recognizes not only the commitment that comes with being a student-athlete but being a student-athlete at The University of Texas at Dallas that’s no easy feat,” Fitch said. “We have very strong academic programs, and it takes a unique individual to be able to do both. [Marin] is beyond committed, passionate, and qualified to deliver.”

During Marin’s time working as interim AD, she prioritized diversity, equity, and inclusion interests she said she will continue to advance by working with her department’s staffers and the Office of DEI.

“We also want to meet with student athletes’ to figure out – what do they want to see us do? What representation do they need? What resources and training do they need to be comfortable in their own skin,” Marin said. “Diversity is a lot of things. It’s not just people of color. It’s also the LGBTQ community, the lower socioeconomic student-athletes, etcetera. We want to make sure that everyone who’s here knows that they have a place, and we’ll support them.”

Along with DEI, Marin is keen on emphasizing UTD’s growth. The University is estimated to hit 31- 32,000 students this fall compared to about 29,000 students in the fall of 2020. Marin said that rapid student growth rate means the Athletics Department has an urgent need to expand its resources. At the top of Marin’s list to accommodate for growth is building a new track for athletes and non-athletes alike to practice and workout, and expanding athletics facilities, which haven’t grown since the conception of the department decades ago, so all coaches and staff have comfort- able spaces to work in.

While we won’t be able to immediately jump into building a track or larger building, we’re going to have plans in place from that first year and numbers ready to go,” Marin said. “There’s going to be an athletics fee referendum for students to vote on this fall, but even before then, I’m already working with the University on what we can afford right away.”

Marin’s final priority for her department is to create effective outreach efforts that inspire underrepresented youth to attend college and earn their degree. With the rising popularity of esports, Marin and her team will promote a gaming avenue, which efforts such as the up- coming public-accessible esports lounge will help with. “Gaming is super fun, it’s attractive but are people aware they can actually attend college through gaming,” Marin said. “I grew up in a low economic class, and until someone told me, ‘you can go to college,’ that wasn’t even an option for me or a dream I had. Because of that opportunity, I’m sitting here today – that degree opened those doors for me that my fam- ily never had. I want to provide that for our UTD community as well – the opportunities, but also, the courage to say, I can do this.”