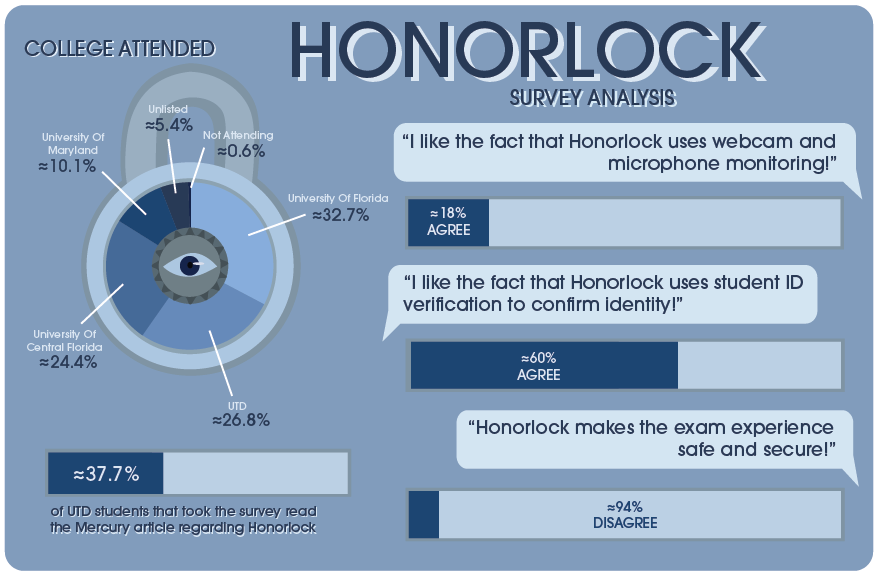 Classes at UTD have returned to their normal modalities, but some still retain a vestige of pandemic-era instruction: Honorlock.

Some instructors have chosen to keep their exams virtual for scheduling flexibility or to set exam lengths that are not limited by 50- or 75-minute class periods. An online survey of four universities – UTD, the University of Maryland, the University of Florida and the University of Central Florida – was conducted by an anonymous party to gauge the opinions of 156 students on the continued use of monitoring software like Honorlock post-quarantine.

The anonymous creator of the survey was inspired by a news article about Honorlock and wanted to quantify users’ opinions on the software. They made their results publicly available online, and there are some clear takeaways.

More than a third of UTD respondents said they had seen this prior Mercury article discussing the effectiveness and necessity of Honorlock, indicating a high level of engagement with the issue.

One of the questions on the survey asked about each feature individually in order to pinpoint users’ feelings about specific aspects of Honorlock. The features that students responded most poorly to were Honorlock’s webcam and microphone monitoring. Microphone monitoring was the most unpopular feature, with less than 10% of students feeling comfortable with it.

“My takeaway is that a lot of people don’t like Honorlock’s more invasive features,” the creator said.

However, students’ responses to other features- such as student ID verification to confirm test takers’ identities- were much more neutral. More than half of student respondents reported having no concerns about this feature.

“I think that shows that Honorlock can be good if it cuts back on the invasiveness,” he said.

A lesser-known concern about Honorlock that the creator tried to raise awareness of through his survey was the software’s use of “honeypot” websites to catch cheaters. These websites are designed to trap students who copy and paste test questions directly into a search engine, hoping to find solutions online. Masquerading as innocuous search results, they record who visits them and for how long. Privacy concerns are raised by the fact that they also record clicks from devices that are not using the Honorlock extension and try to match them up with a student who is currently taking an exam to provide evidence of academic dishonesty.

Overall, the results of their survey make the creator skeptical about Honorlock’s role in a post-pandemic world.

“Honestly, outside of schools that will continue to provide an online option, I don’t think [Honorlock] has much of a role going forward,” he said. “I think students are more comfortable with one real human watching over them instead of HAL-9000 and random people you don’t know and can’t see.”