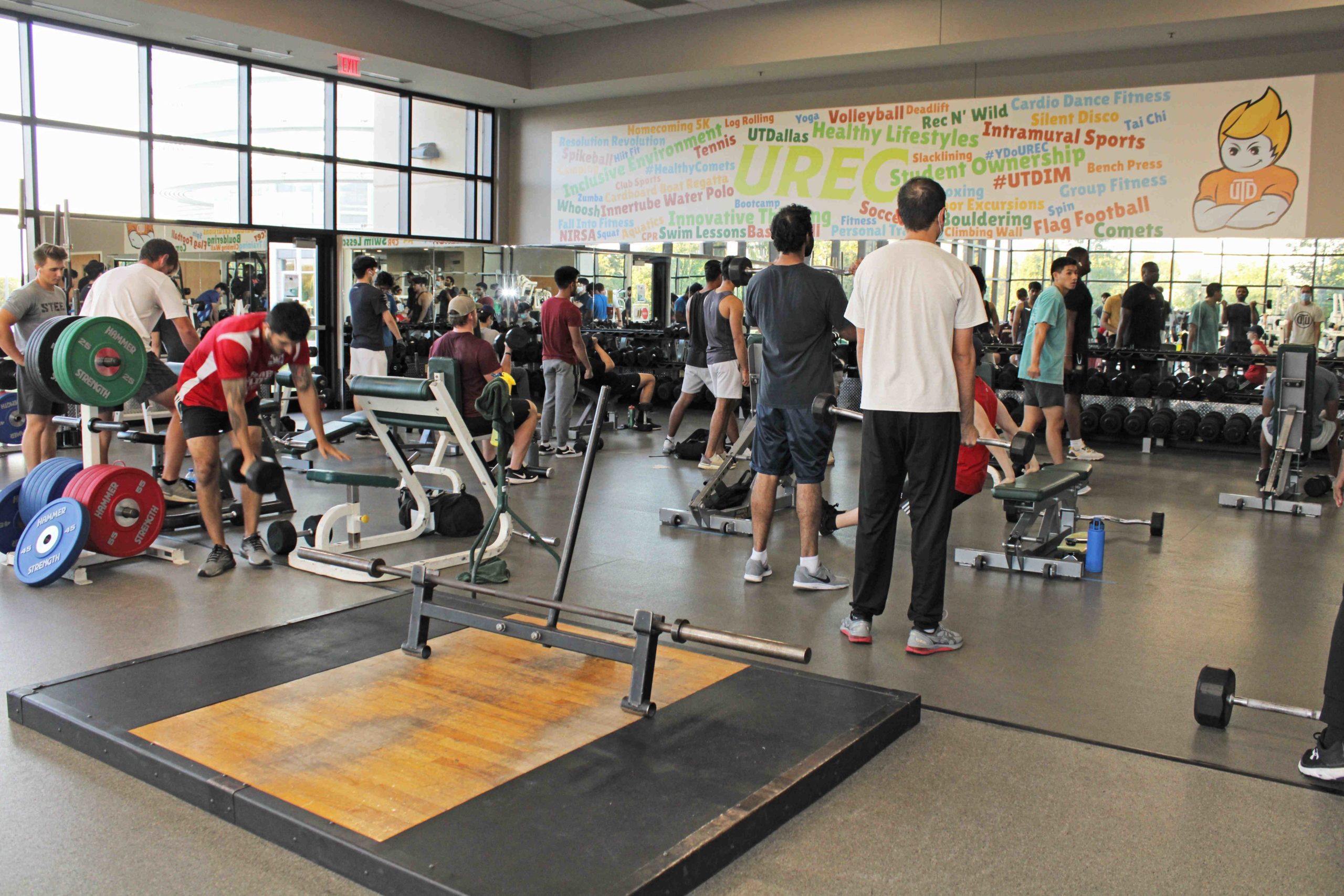 Gymgoers are generally satisfied with the quality of UREC servies but are unhappy about their busyness. Photo by Adamaris Dominguez | Mercury Staff

Overcrowded spaces, long wait periods and a lack of quantity and quality of equipment are only a few of the complaints expressed by students this semester about University Recreation facilities on campus.

These issues are not uncommon, especially as UTD’s rapidly growing campus nears 30,000 students. However, gymgoers’ frustration due to surging volume seems to have reached a climax, with the subreddit r/utdallas garnering several posts by students regarding their experiences in the Activity Center.

In a post labeled “Rant,” Redditor unhappycamper6969 said, “Every time I go to the gym on campus it’s always busy as hell and all the machines are falling apart. Like they can’t expand it or upgrade the machines? I just want to be able to get a good workout in.”

Similarly, user theproz99 said in a different post, “I desire more benches. There aren’t enough. I show up early and they’re full. Don’t even get me started on the squat racks.”

Students on campus, like biomedical engineering junior Leighton Anderson, were generally satisfied with the quality of UREC services but frequently cited crowding as a limiting factor in their usage of the Activity Center.

“I never use the Activity Center,” Anderson said. “I’ve got my own gym in my apartment complex. It’s not nicer, but there’s less people and it’s not as crowded. When I went [to the Activity Center] the first time, it was super packed.”

UREC Director Tricia Losavio said that while she did see a noticeable increase in equipment usage this semester, even during off-hours in the early mornings, this was partly due to the aftereffects of and adjustment to the pandemic.

“The fitness area is always crowded at the start of the semester; it’s new to everybody,” Losavio said. “And then on top of that, you have two groups of students who have never stepped foot on campus wanting to work out and get out since they’ve been cooped up for 18 months. With Rec Center West being taken offline as a COVID testing site, that just added to the volume. Was it an initial shock to see almost 80 people working out at 8 a.m. the first day of classes? Yes, I’m not going to lie, that’s never happened in the 17 years that I’ve been here.”

As for equipment, new cardio machines are cycled out on a three-year rotation, with stationary bikes replaced one year, treadmills the next, ellipticals after and so forth. The selectorized equipment has a much longer shelf life, so the maintenance usually only goes as far as cleanliness in appearance and upkeep, such as making sure seats aren’t ripped.

“We’re 18 months behind,” Losavio said. “I haven’t been able to do much maintenance or operating, and we are just trying to catch up. Some of the equipment takes longer to get fixed. We have a maintenance company that services the equipment every three months, and if we have something that’s down, we schedule an appointment for them to come out and look at the equipment, diagnose it, order parts, install them. There’s not a fitness hardware store that I can just walk into and order a new weight stack. That is specialized equipment you have to be certified to work on.”

Outside of the main gym, club sports practicing in the auxiliary gymnasiums and multipurpose rooms also face problems with space. Computer science senior and fencing club president Kurt Eggers said his team is the second largest club sport at UTD, but they only have access to one basketball court space and a small closet space that’s shared with another club, making it difficult to fit fifty members in a sport that takes up so much area.

“It can get really cramped,” Eggers said. “Space is kind of the limiting factor for the fencing club. We could be so much more efficient with our practices; more people could fence at one time, so less people are just waiting around, sitting down, talking and people get to fence right at the same time. And on top of that, it [would be] way safer. I’ve recognized [UREC staff] are doing as best they can with the space that they’ve got, but I think the spaces are just too small for how big club sports have become.”

“It’s too compact. With the amount of people that we have, people are tripping over each other and that kind of stuff. That’s something we had to deal with early on. Now as the semester’s kind of trickled in, members got to realize there’s so many people, so they stopped showing up as well. And so, I think that kind of hindered our club growth,” Dubbaka said.

The Activity Center opened in 1998, and in the spring of 2005, an expansion project was completed to double the area from 4,000 square feet to 8,000 square feet. That remains the size of the fitness center, although several multipurpose rooms have also been added to the building to incorporate more club sports and group exercise classes.

Losavio – attributing them to UTD’s fast growth over a short period of time – acknowledged the spacing concerns, noting that the recommendation for a university recreational center is at least 10 square feet per student. So, for a campus with 30,000 students, there should be 300,000 square feet of recreational space; yet UREC facilities – totaling just under 150,000 square feet – are approximately half of that. However, for an expansion to occur again, students would have to agree to a doubling or tripling of their $65 recreation fee.

“To build a 300,000 square foot facility, you have to think about the design process at the time of inception, and it’s probably years out before you even break ground,” Losavio said. “Building a facility is like a two-year process, but students have to vote on it, they have to pass the referendum, it goes down to the UT System for approval, the Board of Regents has to approve it. Students will start seeing an increase in their fee to start generating revenue needed to build it [before that happens]. … I would love to see a new facility before I retire, so hopefully maybe we can work on that.”