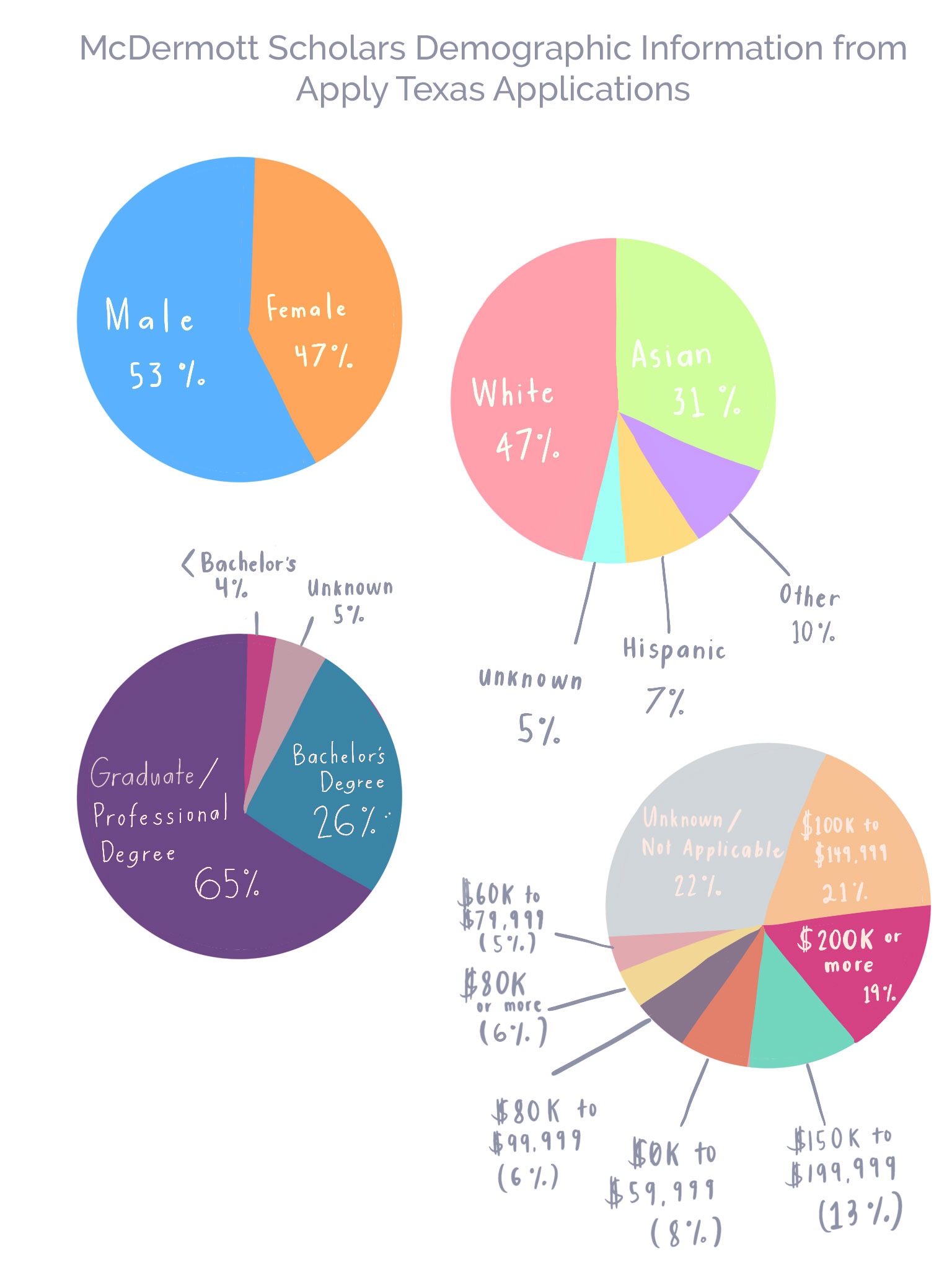 A group of students is questioning the requirements of the McDermott Scholars program and is taking steps to make it more fair and accessible to low-income and minority applicants.

International political economy seniors Sarah Whipple and Samee Ahmad are working alongside other scholars such as psychology senior Ruqiya Barreh to make the McDermott Scholars program more inclusive and accessible. Whipple said they hope to do this by removing the 1490 SAT and 34 ACT scores required by the program. She said that the program already has a rigorous application that requires several essays, letters of recommendation, a video and Finalist Weekend, where scholars tour the campus and go through interviews.

The scholars started the Diversity, Equity, Inclusion and Access committee in the McDermott Council, the program’s internal policy and advisory board, in fall 2019. Committee members released a report in February detailing the demographic makeup of past McDermott classes. The Mercury obtained a copy of the data used in the report, which consisted of matriculant data from 2009-2019. The numbers show that over 78% of the 238 scholars in that time period were either White or Asian and nearly 7% were Hispanic. Another category, labeled “other” consisted of 23 scholars. The data did not have categories for Black, Indigenous or mixed-race scholars because the numbers were “too small to report” and could potentially cause FERPA violations.

Program director Reena Schellenberg cited the program’s endowment agreement in an email statement to The Mercury. The endowment, a gift from late Dallas philanthropist Margaret McDermott, had terms, including a stipulation that McDermott Scholars must rank in the top 10% of the incoming freshman class, so the SAT score requirement represents the top 10% of UTD freshmen. Schellenberg said that the program has recruited and enrolled students for 20 years in accordance with the endowment criteria.

“In carrying out this mandate, the program has consistently made diversity and inclusion a high priority, with results that are manifested in the profiles of our current students and our alumni,” she said in the statement. “We are always sensitive to how the program can be made even stronger and many ideas for such improvements have been the topics of recent and ongoing discussions.”

McDermott alumni such as Elyse Mack, who graduated in 2018 with a degree in visual and performing arts, are hoping to get involved with the scholars’ efforts.

“If you take a look at other merit scholarships nationwide, this is not a McDermott specific problem. We are all grappling with this notion that for a long time, the SAT and the ACT were considered neutral reflections of one’s intellectual capability and we now know better than that,” she said. “So the question is, moving forward, how do we adjust?”

Changing the endowment to remove the rank requirement would require consent from UTD and the Eugene McDermott Foundation. For UTD approval, the change must be requested by program administration, which includes the program director and the McDermott Scholars Selection Committee. A formal memorandum must then be sent to the Provost who in turn makes a request to UTD’s President who, after receiving approval from the McDermott Foundation, then makes a formal request to UT System.

The SAT and ACT can be expensive for students, especially those who are unable to afford the high costs of taking it multiple times and the associated costs. The SAT costs $49.50 without the essay portion and $64.50 with the essay portion. The ACT costs $52 without writing and $68 with writing. Calculators are allowed on parts of the exams and permitted graphing calculators can cost $50 refurbished or over $100 new. Additionally, SAT and ACT prep classes can cost $75-1,000 or more.

Mark Kantrowitz, vice president of research at savingforcollege.com found in a 2011 analysis that white students received 76% of all institutional merit-based scholarship and grant funding despite making up only 62% of the student population at the time.

Whipple said that while she wants the McDermott program to be more diverse, she wants to achieve that goal by making the program’s policies more accommodating to students from different backgrounds rather than recruiting them into the program as it exists now.

“When people talk about standards, they’re generally talking about standards that you can buy or standards that certain people have more access to. I think not using those as evaluators isn’t lowering our standards. It’s changing how we determine merit. It’s insulting to think that other students aren’t meritorious because they don’t have the SAT score,” Whipple said. “It’s about how we decide who has merit and who doesn’t … It’s just sort of deciding what things that you value in a student. I would much rather value someone who has passion and drive than someone who got a good score on an SAT.”

“There are certain policies that can make it difficult for low income students or students of different backgrounds to participate fully. You know, people of color may experience isolation in the program given that there aren’t a lot of Black and Latinx students,” Whipple said. “I think that we’re doing things to perpetuate inequalities that we need to reckon with and be held accountable for and change.”

Barreh, a black McDermott scholar, said that she’s felt isolated within the program at times.

“As the years have gone by and the class sizes have grown smaller, it becomes more apparent that black students just aren’t being invited to Finalist Weekend and … that this isn’t a space that’s welcoming to black students,” she said. “I feel like there’s definitely a lot of individual McDermott Scholars that are really great and really accepting, but the institution as a whole doesn’t really create a space where black students, at least in my opinion, can feel accepted or included because their voices just aren’t being heard in the same magnitude that my white counterparts are.”

At the end of her first year, Barreh took a tour of Gettysburg while on a McDermott trip to DC with the rest of the freshman class. Barreh said that the tour praised Confederate generals and although she was uncomfortable, she was not allowed to opt out. As part of the activities on the tour, the students had to wear name tags representing historical figures from the Civil War and do a presentation of pros, cons and leadership skills they could learn from the figures. They randomly drew the names. When Barreh’s turn came, she drew Robert E. Lee.

Lee was the commander of the Confederate States Army during the Civil War. The Confederate Army fought to not only keep slavery legal in the US, but also to expand it to other territories. Lee was a slave owner known for separating his slaves’ families and whipping runaway slaves until they bled before pouring brine onto their open wounds.

Barreh said that her request to switch to another character was denied and she was told it would be unfair to other students.

“I felt like my concerns as a black person weren’t being heard or were being played down and basically I was just told to suck it up,” she said. “I had never felt so humiliated. I’m pretty sure I cried, if I remember correctly.”

Barreh emailed McDermott officials several times afterward to detail the experience, which she said was dehumanizing, in hopes that things would change. She said she never got a response and when future trips to DC got canceled, she found out it was due to financial reasons, not because of the concerns she’d raised.

“It felt like my pain wasn’t being taken seriously because I was one of two black people on the trip,” she said. “It’s like it wasn’t an issue that they had to address because it wasn’t affecting everyone else.”

Despite her concerns with the program’s diversity and accessibility, Barreh said her overall experience has been positive and she encourages minority students to apply.

“In spite of McDermott’s fog concerning diversity, this has been a phenomenal experience. I have had a lot of opportunities granted to me that I wouldn’t have had because of McDermott,” she said. “I think it’s our responsibility as minority students, especially as we have the means and the credentials required for this program, to enter it and try to work to make this program more accessible for other students that are just as capable and just as smart but may not have the like numbers to back them up because of structural discrimination.”

Whipple, Barreh, Ahmad and the other scholars on the committee hope to see changes made to improve the McDermott program’s diversity and accessibility. Mack, who hopes to work alongside other McDermott alumni to help the DEIA committee reach its goal, said she’s looking forward to seeing a more diverse program.

How UTD professors are adapting to online classes