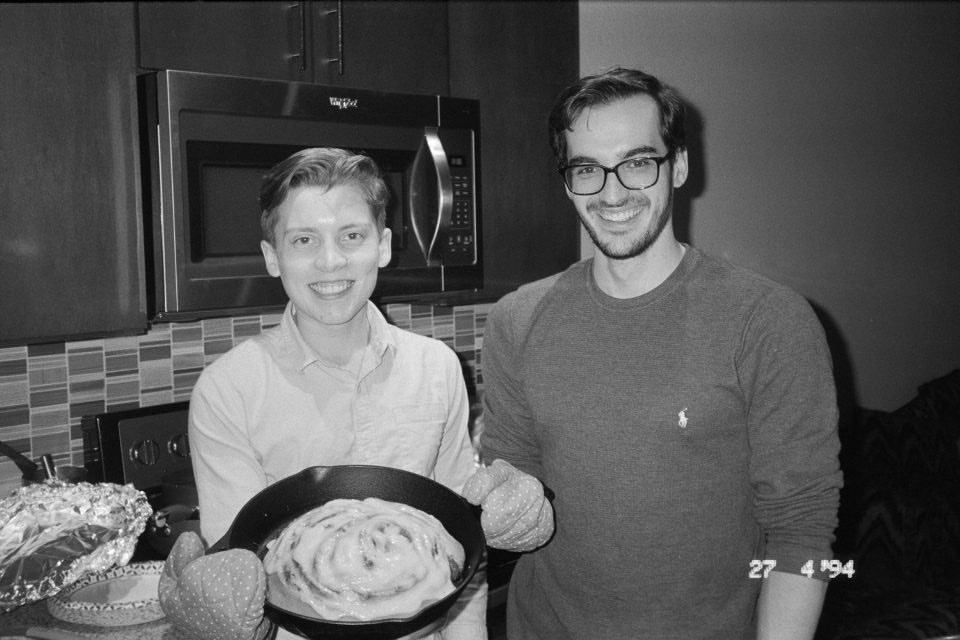 Chase Ferrell and Mason Kitchens bake their cinnamon rolls in Ferrell’s Northside apartment When the campus and gymnasiums closed down due to the coronavirus pandemic, a new door of opportunity opened up for two UTD students to do what they love most: making cinnamon rolls. Photo by Ayoung Jo | Life & Arts Editor

Psychology sophomore Mason Kitchens and electrical engineering junior Chase Ferrell are friends and gymnastics teammates who came together to launch a delivery service for homemade cinnamon rolls. Ferrell said their love for cinnamon rolls started in San Antonio, where he and Kitchens visited during a gymnastics event.

“Mason and I got a giant three-pound cinnamon roll, and we tried to race to see who could eat the fastest, and it was pretty good,” Ferrell said. “We decided to try making our own and messed around with different recipes, and found one that was super, super good.”

Kitchens took to Instagram on April 5 to launch their business, which has been shared by their friends and the UTD Comet Life account. The account now has over 180 followers.

“Jokingly, we were like, ‘Okay, what if we made a business out of this?’ Just because we made them for ourselves and it was a lot of fun,” Kitchens said. “So, I started the Instagram page, which I was surprised by how quickly everything picked up. Since then, we have not stopped.”

Although both Kitchens and Ferrell have made several dozen batches of cinnamon rolls together since starting their business, they had different levels of baking experience in the beginning.

“I only started cooking for the first time in my life last year, but I’ve learned a bunch of stuff,” Ferrell said “Now we make all the cinnamon rolls from scratch, so it’s quite a big step-up for someone that couldn’t even make eggs correctly.”

Kitchens said that he has been cooking since he was five years old, thanks to his grandmother who had him in the kitchen at an early age.

“Chase and I usually work out together and kind of found joy in cooking together just because it’s fun and we both enjoy doing it,” Kitchens said. “It’s been a fun experience growing our techniques together.”

Kitchens and Ferrell receive their orders on their business Instagram page, which they put on a spreadsheet to determine when to make the batches at Ferrell’s Northside apartment. The two sophomores make the delivery themselves, but customers can also schedule a pick-up, if preferred. The cinnamon rolls are offered for $20 a dozen, $12 for half dozen and $18 for one large cinnamon roll that weighs two pounds.

“We try to make as many as we can at once to limit how often we meet up as much as possible, but we also have to try to bake them fresh so that we can immediately deliver them,” Ferrell said. “It’s kind of a balance between those two.”

Kitchens said that they are taking extra precautions to ensure safety for themselves and their customers during the pandemic. The cinnamon rolls also come in tight-fitting containers to prevent exposure to contamination.

“I wear a personalized mask when making deliveries and use hand hygiene before and after,” Kitchens said. “Some customers pay using Venmo, which makes door deliveries easy. However, if they are paying by cash, we do have limited contact and take extra care in regards to hand hygiene and personal protective equipment.”

Ferrell said that the transition to online classes has been working out well, as he juggles schoolwork and the business.

“It’s a lot more flexible, where I could be sitting, listening to a lecture while also making some cinnamon roll dough, you know,” Ferrell said. “My time isn’t nearly as constricted as it was.”

Though many of their customers stumble upon their business on Instagram, others get recommended by friends who have ordered before, Kitchens said.

“I used to serve at a country club, which is currently on lockdown because of COVID-19. One of the ladies I used to work with spread the word for us because she ordered quite a bit of cinnamon rolls for her family and she loved them,” Kitchens said. “A lot of our new clientele is just by word of mouth.”

Kitchens and Ferrell said they plan to continue the cinnamon roll business even after the lockdown orders have been lifted.

“We kind of were surprised by the amount of orders that we’ve actually gotten. People seem to really enjoy them, which we were not expecting,” Ferrell said. “I would like to continue it as long as we can.”