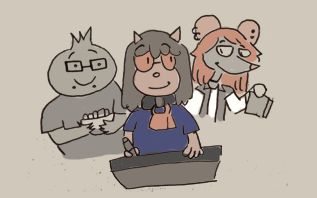 As cliché as it sounds, a breakup is just one of those falling outs that hit differently, and no other work captures the awkward transition of moving on from that person and that life you had together like Jen Lee’s “At The Edge Of The Stream At Dust.”

To summarize, “At the Edge of the Stream at Dusk” is a bittersweet memoir about how Lee started her career in animation after the unexpected breakup of an almost decade-long relationship. She ends up moving across the country, from her rural life in Idaho to Los Angeles, and starts a career in the animation industry. Throughout this move, she navigates the highs and lows of transitioning from one phase of life to another.

While at first the premise of this comic might not seem exciting, the visuals and color palette the author chooses to go with it are more than interesting enough to compel a reader to continue. To start, Lee has an interesting way of using black and white as negative space to separate memories from the past and from reflections on things in the present. This also allows her some freedom with where she chooses to have panels, speech bubbles or unbordered sentences on the page. The color palette of “At the Edge of the Stream at Dusk”clearly reflects its title, repeatedly using orange, shades of blue and light brown to imbue her story with a comforting, dream-like atmosphere, which adds to the overall theme of the comic being a recollection of someone’s memories.

Jumping off of that, there is a visual style change that happens three times where the author includes actual photos from her life and Idaho-to-California move. The first happens when you open up the book: if you look at the right where the front board is, you’ll see a real picture of a pig eating and baby sheep pasturing on her farm. The second, when Lee’s big move to California finally happens, involves actual photos of the of the trip she took, but with the added detail that she’s drawn over the picture where a person would appear with the artistic style she’s using for the rest of the comic. Then, for the third and last time it happens again at the end of the comic: the backboard of the book has a close-up picture of a chicken from her farm. It’s a fitting ending, reminding us that this isn’t just some fictional story someone made to cope with a tragic event in their life; instead, it’s an intimate, true story about loss and recovery.

Beyond its visual expressiveness, Lee’s comic is funny in ways you don’t expect. For example, it is riddled with tastefully self-deprecating jokes. A specific scenario that showcases this occurs towards the end of the story, when she and her boyfriend decide to stop speaking to each other. She claims she took this conversation like a champ, but draws herself in the following panels crying while doing daily activities. (She most definitely did not take it like a champ). This calm situational humor combined with the comforting, yet dream-like atmosphere Lee conjures up through visuals creates a comic that feels like an understanding, literary hug.

Facing the end of something, especially when you have invested a lot of time and of yourself in it is always hard. Lee reminds her readers that, through growing pains, you’ll heal and reach a new state of normalcy- you just have to hang for a bit and ride out all the emotions that come with moving on. Yes, you can talk it out to close ones, but sometimes you just need to read about someone who has gone through the same thing as yourself. If that’s you, or if you’re looking for a creative outlet to make sense of things during an awkward transitional period, perhaps you’ll take inspiration from Jen Lee’s “At The Edge Of The Stream At Dust.”