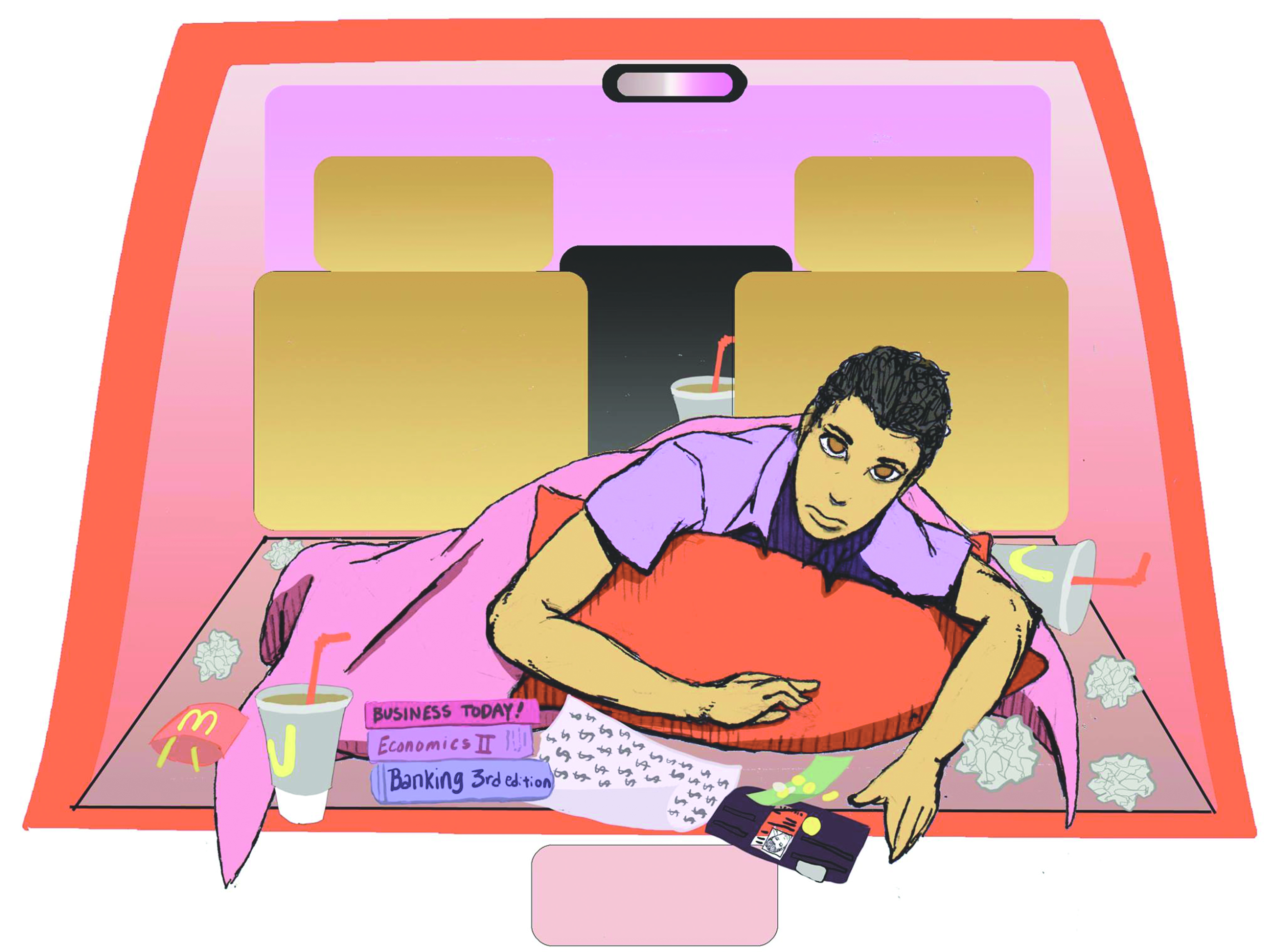 Jose is having a bad day. He can’t concentrate at his job because of the crushing stress that constantly eats at him and will leave him emotionally unstable for years to come. He graduated college last spring, but he lives on a friend’s couch not far from work.Although that friend might as well be a stranger, the two met at a party, and the only thing they have in a common is their taste in music and frequent use of alcohol.

Jose doesn’t really like to drink. He only does it to forget about how his family became so broke in the aftermath of the Great Recession that they can’t afford to take care of him, so as of late, he doesn’t have a place to call home. Homeless meaning he sleeps on couches, sometimes in his car and occasionally sleeps outside.

Jose is lucky that he graduated last spring and made it this far, but he doesn’t have the experience to get a better job. School ate up his time. He tries to save money, but he doesn’t make enough at his minimum wage job. He has to pay for gas for his car, food to eat and other necessities. There’s barely enough to save up at the end of the week. Sometimes his grandfather helps him with money, but Jose doesn’t feel right asking him for help because he has his own problems.

At work, Jose doesn’t have many friends. Most of them think he’s just dirty and lazy. Most days, he’s just tired from working late shifts. Other days, he doesn’t even bother showing up, even if it costs him money. While nothing catastrophic happened today, he only partly feels like he can make it to tomorrow. It’ll be a miracle if he does.

One might say that all he needs to do is get his priorities straight, stop drinking and work harder, even though that’s shortsighted and much easier said than done. He’s struggled to get to this point and continues to work hard to stay there. No matter what other people think, Jose’s condition is not his fault.

Jose isn’t a real person, but his story resonates with the lives of some American millennials still dealing with the blowback of the Great Recession and its impact on the economic well being of communities and families like his. Although, his case is a very specific one, most young and homeless adults can’t go to college for one reason or another.

Even in 2015, while the economy is in a debatable “full recovery”, people like Jose have to live their lives hand-to-mouth.

According to the 2013 data in “The Age and Structure of Contemporary Homelessness: Evidence and Implications for Public Policy,” people in their twenties make up roughly 25 percent of the homeless population. This is a high rate compared to previous generations and much of this is due to the high unemployment rate.

In a 2014 report published by the National Alliance to End Homelessness, 19 out of every 10,000 people living in the United States are homeless. The same data shows that there are roughly 600,000 homeless living America, including people with families, young adults and veterans.

There’s indisputable evidence that this generation has faced some hard times and will continue to do so if the right actions aren’t taken. According to a 2013 report from the Pew Research Center, millennials have seen higher unemployment than previous generations of the past 50 years, and the housing bubble, rising debt and bad banking practices have contributed to this problem.

In a country where politicians blame people like Jose for being entitled while they pander to their constituencies for votes by promising improvements in the economy, homelessness is still an ever-present problem. It’s cruel and unusual to blame a victim who’s stuck in a hole and then tell him to get a job. Yet it’s comforting for them to blame a scapegoat for some of the country’s economic problems – a homeless peon in the eyes of a politician. Many people — such as Jose’s classmates — buy that rhetoric.

I know people like Jose and I don’t think the blame should be entirely cast on millenials for their faults. Some are there to escape an abusive household, others come from economically privileged families but their conditions are influenced by intrinsic factors, such as their identity or life view, that don’t fit the conventional status quo. Others even get kicked out for their belief system. Meanwhile, the LGBTQI community is grossly affected by rampant homelessness. Jose’s story is not a specific case but it can happen to anyone.

In order to take action, I think the community should support initiatives that raise awareness on the modern issues of homelessness. On the national level, voters should elect politicians that are making efforts to combat the policies that influence homelessness.

If you or someone you know is in a situation like Jose’s, don’t be afraid to speak up or lend a hand by giving them a place to stay or even giving them a ride. You can also reach out to your local church or community center to volunteer and help combat the general problem of homelessness.

“What features would you like to see added to Northside at UTD?”