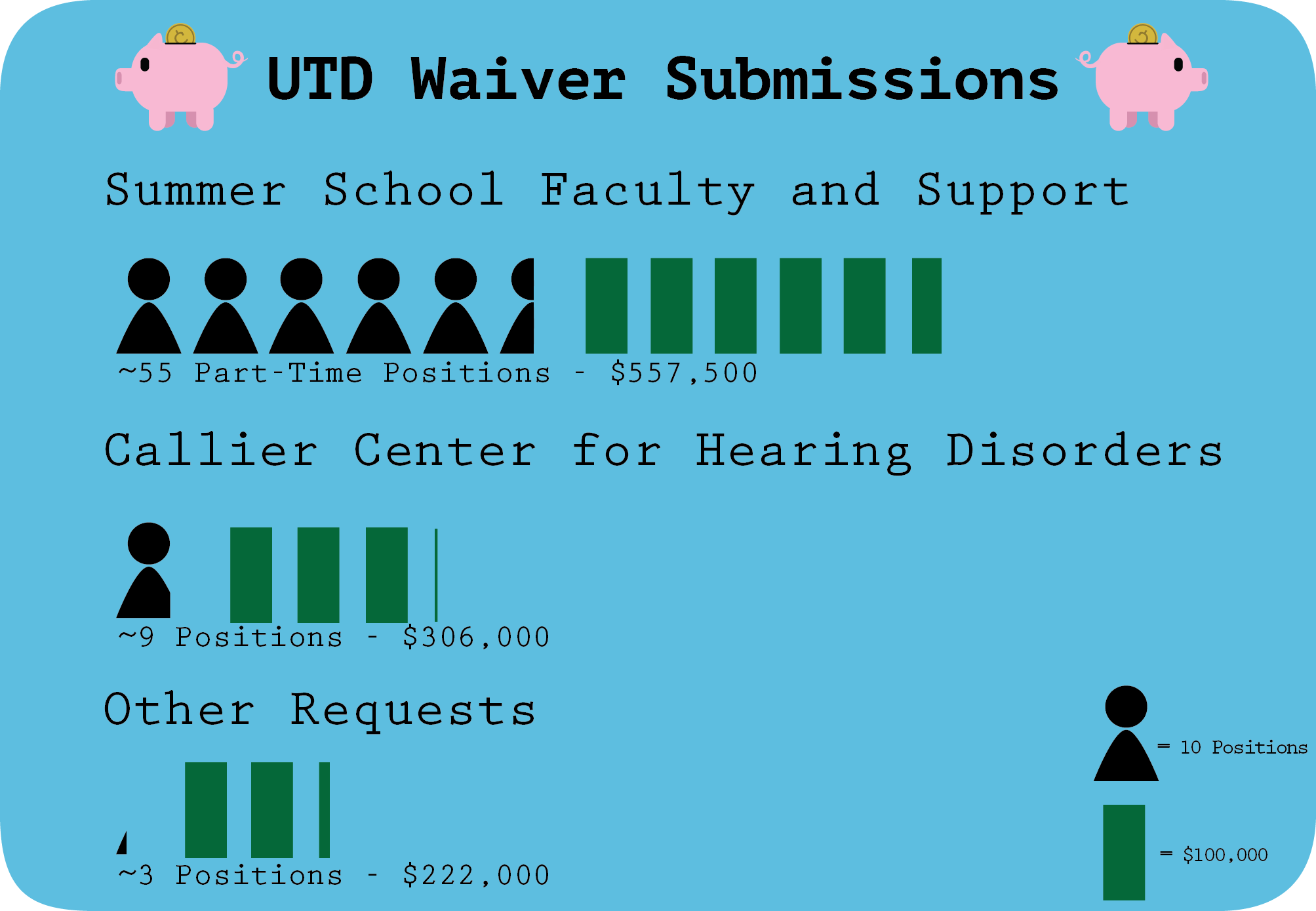 Waivers for the hiring freeze are evaluated by a committee and President Richard Benson before being sent to Gov. Greg Abbot’s office for approval. Currently, UTD has requested over $1 million in waivers for faculty and support positions. Graphic by Anthony McNair | Mercury Staff.
Editor's Picks
News

A statewide hiring freeze is affecting UTD, where 55 percent of staff are paid using state funds. The freeze was announced in January by Gov. Greg Abbot and will last through August.

At UTD, the impacted positions are mainly active in the summer term and at the Callier Center for Communication Disorders.

The Department of Family and Protective Services and all agencies under the purview of Texas’ elected executives such as the attorney general and railroad commissioner were exempted from the freeze.

Universities can continue to hire, but only if the position is funded by a non-state entity, such as a foundation or an individual. If a position is funded by the state, the university can submit a waiver to be exempt from the freeze on a per position basis. Waivers can be submitted to the governor’s office for reprieve from the freeze, but at UTD it must first be reviewed by a committee and President Richard Benson before being sent.

The Callier Center requires a certain number of child care staff in order to maintain accreditation and that number is currently low. Without a waiver to hire more providers that number will continue to naturally decrease as individuals leave their jobs, said Vice President of Budget and Finance Terry Pankratz.

He reported the university has already submitted several requests to the governor’s office but have not heard back yet.

“One that we have sent down is for a senior buyer in our procurement office. Well you might say, ‘What’s so important about a senior buyer?’ The reality is that we only have two and one just retired. So now we’ve got one person who’s trying to facilitate the buying (of all items) for the entire university, and really one person is not enough,” Pankratz said.

In waivers the university sent, they estimated how much state funding would be spent in the hiring of the applied positions. The largest waiver is to spend $557,000 for summer school faculty and support, followed by $306,000 for Callier Center positions and $222,000 for three other positions.

However, UTD did not have a large number of job vacancies at the time the freeze was announced. There were 35 positions that were vacant at the time, but that number is expected to grow over the summer months, Pankratz said.

“From a UTD perspective, it is a challenge to manage through this. I think each of the schools and divisions in their own way will certainly be impacted as we try to deliver our services throughout the remainder of the year,” he said. “Our primary focus has been on protecting the academic mission and making sure that we the appropriate number of faculty to meet with our students.”