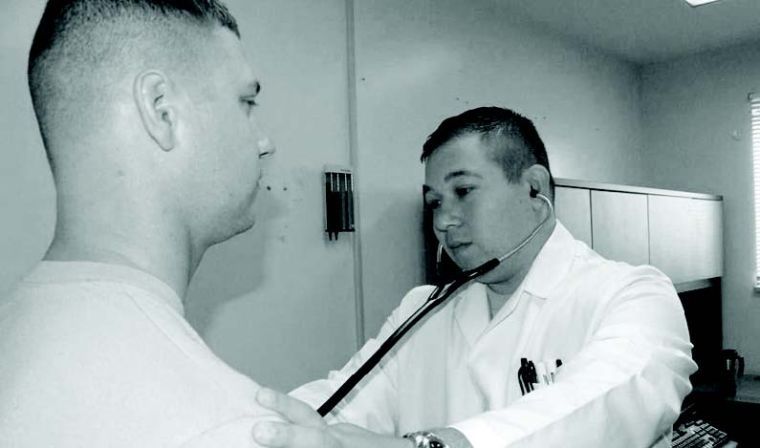 CC-BY CHANEL WEAVER | U.S. ARMY Capt. David Kassop, U.S. Army, listens to the heartbeat of a patient in a Maryland clinic. Many who would qualify for subsidies to buy health insurance from healthcare.gov must also qualify for Medicaid — ruling out a significant number of UTD students.
Opinion

The new year loomed around the corner and so did the deadline to apply for healthcare insurance, which was extended to Dec. 31 at 11:59 p.m., if a person wanted to be covered on Jan. 1, 2014. Having seen abhorrent medical bills from one visit to the ER in the summer of 2011 after a soccer injury, I grudgingly opened my laptop and went off to visit www.healthcare.gov or what is commonly called the marketplace for healthcare insurance.

Since it has become a law with punitive action involved for not being insured, I was hoping that I would become one of those young adults who could get insurance for “$50” a month, as the White House claimed, if they qualified for government subsidies. Within a few moments, I realized the two questions that would have ensured some level of financial help from the government pertained to being an individual who was eligible for Medicaid or one with children listed as dependents. I am older than the average full time student here at UTD and will not qualify for Medicaid and I do not have children. However, my income level is just as what would be expected for a full time student on government loans—zero or very low from part time jobs.
The cheapest bronze plan, of which there were eleven, was $175 per month with an annual deductible of $6,000. There are a total of 11 Bronze plans, 14 Silver plans and 11 Gold plans initially shown as options. It really did not make sense to me, how an extra cost of $175 per month would work out in addition to rent, utilities, a gas guzzling car, books, groceries, credit cards and the occasional date for a person working for the minimum wage and/or on the poverty line.
Is Obamacare really going to help the poorest of the poor who cannot have access to employee health care? If you subtract $170 per month for a year, then you end up with $11,820 of income you can take home annually, if you are working on minimum wage not including applicable state and federal taxes. If I was this person, I would be very reluctant to part with $175 per month for the cheapest health care plan.
I sat there blinking at the computer and pondered on how I would afford this expenditure, when I realized that I was not obligated to buy insurance from only this website, but that I just had to buy insurance.
I remembered that UTD itself offered an insurance plan for its students and I knew that it was an absolute must for international students to buy the insurance. After quick search, I was pleasantly surprised with the $525 fee for the whole semester cost, which worked out cheaper than the $175 per month with no exorbitant deductible.
An emergency room visit would cost me $75, generic prescription copay would be $10 and brand-name prescription copay would be $15. A little more scrutiny revealed that it was still cheaper to buy UTD health insurance for the spring and summer session together at around $800 for the two semesters if one were planning to take courses in the summer. The terms and conditions such as a preset deductible and cheaper rates for in network HMO doctors and hospitals was a far more viable option for me than buying individual insurance from the Obamacare website. Blue Cross Blue Shield of Texas administers the insurance I purchased from UTD.
I understand the need for previously uninsurable people who have the ability to pay to be able to obtain insurance, but I do not think that the website has done a good job of listing all the possible insurance plans available to a person from different backgrounds such as full-time student. To be called a marketplace, it should truly be one to live up to the definition of the term marketplace. In my case, it clearly was not.