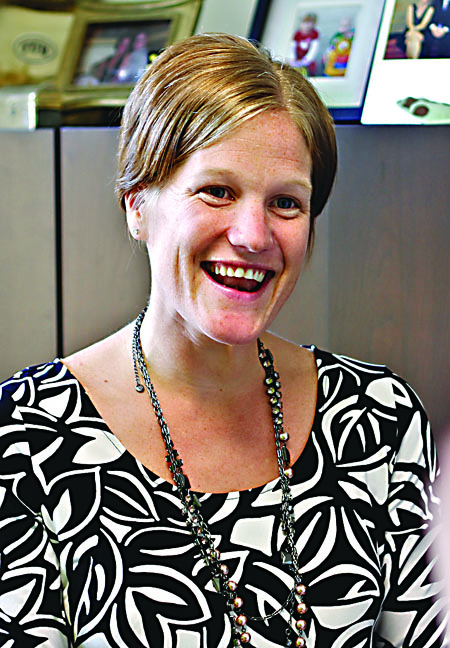 Akshay Harshe|Mercury Staff FSL Assistant Director Julie Murphy came to UTD from the University of Texas at Arlington. She is the first of two new assistant directors to be hired for the new school year.
Campus News
News

Fraternity and Sorority Life is undergoing not one but two changes in leadership following the departures of previous FSL assistant directors Zach Shirley and Briana Lemos.

Shirley left for a similar position at Texas A&M Commerce, and Lemos became Student Government’s adviser at the beginning of the semester. After what Assistant Dean of Students Kecia Baker called a “rigorous” hiring process, one of the jobs was offered to Julie Murphy, a Kappa Alpha Theta sister and former coordinator of Greek life and university events at the University of Texas at Arlington.

“Knowledge of Greek life is extremely important (in this position),” Baker said. “I looked for a candidate who would have a great rapport with students.”

Murphy’s responsibilities will include fostering a sense of community among fraternity and sorority life, providing leadership development for members and facilitating success for individual chapters, Baker said.

As UTD’s enrollment surges, so does the number of potential FSL members:. Already, twice as many students have registered for this fall’s Recruitment Week than last year.

“The expected growth of Greek life here is a great way to create a traditional college experience on campus,” Murphy said. “I want (students) to see me as an advocate, but also as someone who can challenge them to push hard and grow the community here.”

Murphy’s challenge to the student body is to not assume too much about Greek life based on preset notions.

“I joined (sorority life) not knowing all the things it could involve, and now I’ve come to make it my life’s work,” Murphy said. “I’d love for students to come and have those conversations (with me).”

Although the second FSL assistant director job is still unfilled, Baker said there will be little to no effect on this year’s Recruitment Week, which starts Sept. 7.

“We’re really trying to make this process as smooth as possible for our students,” Baker said. “It’s sort of like being a swan: On the top of the water, you (appear) graceful and you’re floating along. Nobody has to know that underneath you’re just paddling (really hard).”