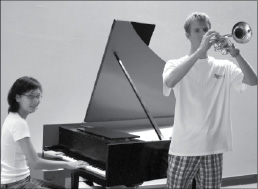 After just three days at UTD, Pianist Truc Do, biochemistry freshman, and trumpeter Phillip Campbell, l felt UTD was missing something. The musicians announced their plan to begin Comet Conservatory two days later.
The Comet Conservatory provides an informal environment for students to form friendships, volunteer in the musical community and practice together for performances, said Do, biochemistry freshman.
A Minor, was a similar music conservatory group that is no longer active on campus.
Do said the Comet Conservatory is flexible, offering a range of outlets to encompass the members’ interests. The group will consists of various ensembles, duets and trios as members see fit.
Do met Campbell, electrical engineering freshman, through the McDermott Scholars program.
They started a Facebook group to gauge students’ interest in the organization, which had 23 members as of early September.
“I wanted to offer students off campus the opportunity to participate in musical performances and just a music environment,” Do said. “There’s not really a club that students can sign up for to just play instruments and offer a casual environment to do that.”
Do said they hope to hold a performance to showcase the ensembles that form within the group at the end of the year. Campbell said he wanted the groups during our meeting,” Do said.
Do has played piano for 12 years and recently won first place in the spring in the Jazz Festival at Richland College. She played in orchestra as well in high school.
“Our music program (at Allen High School) was amazing, so I wanted to bring some of that with me,” Do said.
Campbell retained second chair as trumpet in the top band at Round Rock High School. He recently hosted auditions for his alternative rock band to determine the line up for Acoustic Tuesday at noon Sept. 22 in the Comet Cafe.
“I’ve just always had a lot of music and like I said, I’ve played guitar since third grade so music has always been my fall back,” Campbell said.
Do said they will fundraise by giving lessons and accepting donations to buy refurbished instruments for students interested in learning.
Comet Conservatory will have its first informational meeting in September, after completing registration with OrgSync.
If interested, contact Comet.Conservatory@gmail.com for more information or visit their Facebook group “Comet Conservatory.” 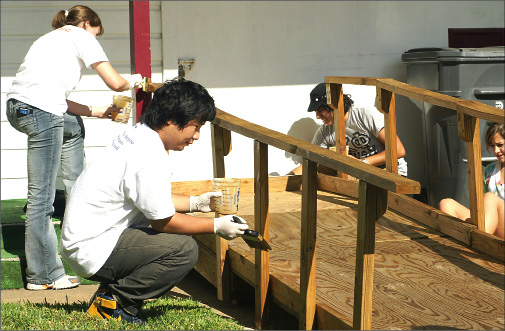