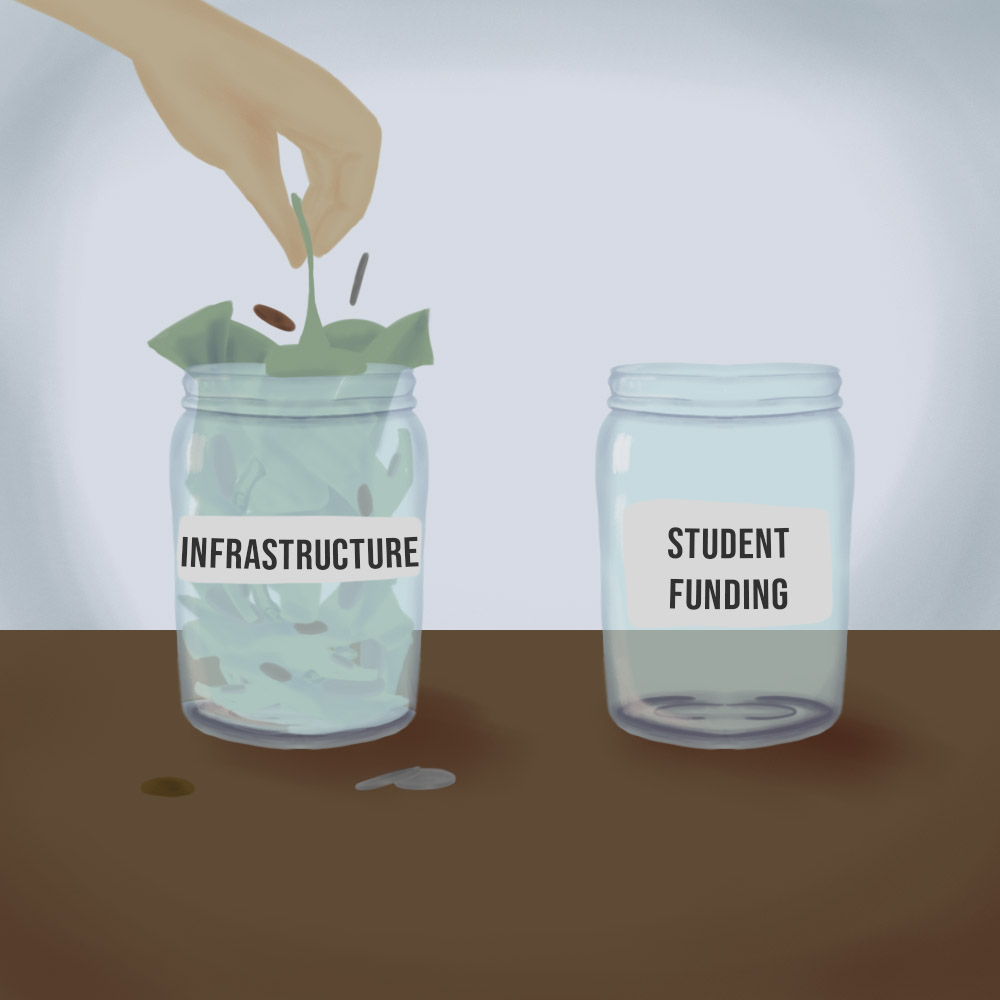 Cranes, orange street signs, dirt and neon yellow jackets have all become sights UTD students see while making their way to class while walking and riding on the few roads left untouched by construction. Many try to imagine how the new buildings will blend in upon completion, while others attempt to remember, ever so vaguely, how the now blocked-off parts of campus used to look. Although it seems as though the university grounds are undergoing simple and much needed improvements, construction is one of the many consequences of financialization, a detrimental process that threatens the future of higher education.

Financialization is a term used to describe the development of financial capitalism and the growth of the nation’s financial sector in the late 1970s and 1980s due to widespread deregulation of the economy. With progressive reforms dominating the Gilded Age, many believed that fewer regulations would lead to increased competitiveness, lower prices and eventual economic growth. According to an article written for the North Carolina Banking Institute, “Financialization: Causes, Inequality Consequences, and Policy Implications,” economic deregulation contributed to the expansion of banking and financial service industries, as well as the normalization of risk associated with the financial collapse of the late 2000s. The stage was set for financialization to infiltrate both the economy and the system of higher education.

Although UTD was only founded in 1961 and joined the UT System in 1969, the university has not been immune to financialization and, in fact, there are evident traces of it on campus today. The aforementioned construction is only one example. UTD’s refusal to invest into a football stadium at the expense of academic programs is well justified. However, the funds that could be going towards scholarships and fellowships to reduce the accumulation of student debt are instead being diverted toward infrastructure. Emails introducing new faculty members surface in student inboxes much too frequently. Joining a team of UTD’s faculty, staff or administrators requires an increase in the amount of money outgoing towards salaries.

While continuous infrastructure projects and renewal of campus staff may seem like positive investments in the long run, the recent reduction in the amount offered by Academic Excellence Scholarship packages and elimination of the $3,000 stipend per semester, both intended to reward academic achievement, reflect the need to increase student tuition rates and fees to offset the lack of state funding. Budget cuts to higher education have frequently been made by states since the 2008 recession, which inevitably caused universities nationwide, including UTD, to raise tuition rates.

According to a report released by the Roosevelt Network, “Financialization of Higher Education,” gambling with interest rate swaps, a complex and risky financial tool, has cost 19 schools approximately $2.7 billion. The report claims that Wall Street has “preyed” on the financial hardships faced by universities nationwide. Upper-level jobs are increasingly occupied by individuals with financial backgrounds who prioritize profits over students, faculty and staff. Moreover, lack of accountability contributes to the growing influence the financial sector now has over higher education.

Financialization, a process that reflects the financial sector’s merciless thirst for profits, comes at a high cost with little to no benefits in return. Luckily, universities tend to be hubs of innovation and progressive movements. Joining student-run advocacy organizations, spreading awareness to peers and followers on social media, building coalitions and developing campaigns are only a few options that students can choose from when entering the fight against financialization. UTD has its own chapter of the Roosevelt Network through which students have the opportunity to start the conversation and gather a group of supporters. In addition, experts like UTD political science professor Robert Lowry are currently conducting research on similar issues.

Although it seems difficult to stand up to an issue backed by decades of precedent, it is important to realize that financialization of higher education does not continue to exist because it is widely accepted by society. On the contrary, it has survived only by lurking in the shadows, accompanied by little-known truths. Spreading the message to one other person may be all it takes to trigger a chain reaction of positive change that will ensure economic freedom for students, professors, campus workers and universities nationwide. Building affordable academic futures is no doubt a more worthy investment than the next science building.