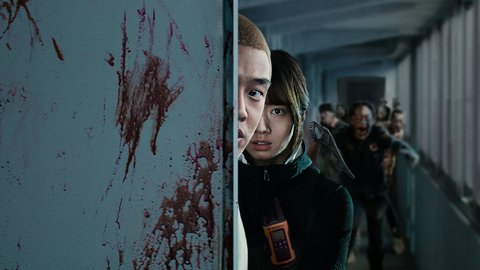 “Alive” is the perfect zombie flick for Halloween.

We all know how well Korea does zombie apocalypse movie, with hits like “Train to Busan” and “All of Us Are Dead” enchanting audiences worldwide. But have you heard of “#Alive?” In an aptly timed 2020 release, the movie mirrors pandemic lockdowns even though the film was produced the year before. “#Alive” wastes no time jumping into the action and has audiences tensely holding their breaths throughout the whole movie.

Yoo Ah-in of “Seoul Vibe” plays Oh Joon-woo, a video game streamer who finds himself home alone in the middle of a zombie apocalypse. Joon-woo’s occupation gives the traditional zombie narrative a unique perspective by integrating technology and the internet. The internet, power and utilities are not immediately cut off, giving Joon-woo a connection to the outside world—for better or worse. While the news depicts the world in flames, there is hope that he may be able to reach his loved ones through social media.

Yoo nails the comedic personality of a golden retriever even as the shadow of loneliness and death linger all around him, resulting in mental strain. Though the movie is focused on the zombie apocalypse narrative, there is an emphasis on the effects of prolonged isolation, which adds realistic layers to the story. As Joon-woo is constantly connected to others through his livestreams, isolation affects him greatly, and the uncertainty of whether or not he will hear from his family weighs on him heavily as time goes by.

Park Shin-hye from “the Heirs” plays Kim Yoo-bin, a quick-witted woman who lives across from Oh Joon-woo. Though it is refreshing to see Shin-hye act in something radically different from her previous roles, there is something missing from the female lead. Her past is consistently hinted at, but the movie never delivers on the mystery of her character’s backstory. This may be an intentional comment on the importance of focusing on the bigger picture, but the outcome is a character that lacks depth and could have been written out of the story altogether.

Besides the uses of technology and social media, “#Alive” also twists the zombie apocalypse narrative by changing the zombies themselves. While the traditional zombie is mindless, this movie’s zombies retain memories from their past lives, which contributes to an eerie view outside of Joon-woo’s window. The infected spend their days stumbling around and mimicking everyday activities. The threat of a zombie opening a door and finding the survivors looms in the background with every step they hear in the hallway.

Though the female characters leave more to be desired, the innovative twist on a modern technologically connected zombie apocalypse should put “#Alive” on watchlists this month for spooky season.

“#Alive” is streaming on Netflix.