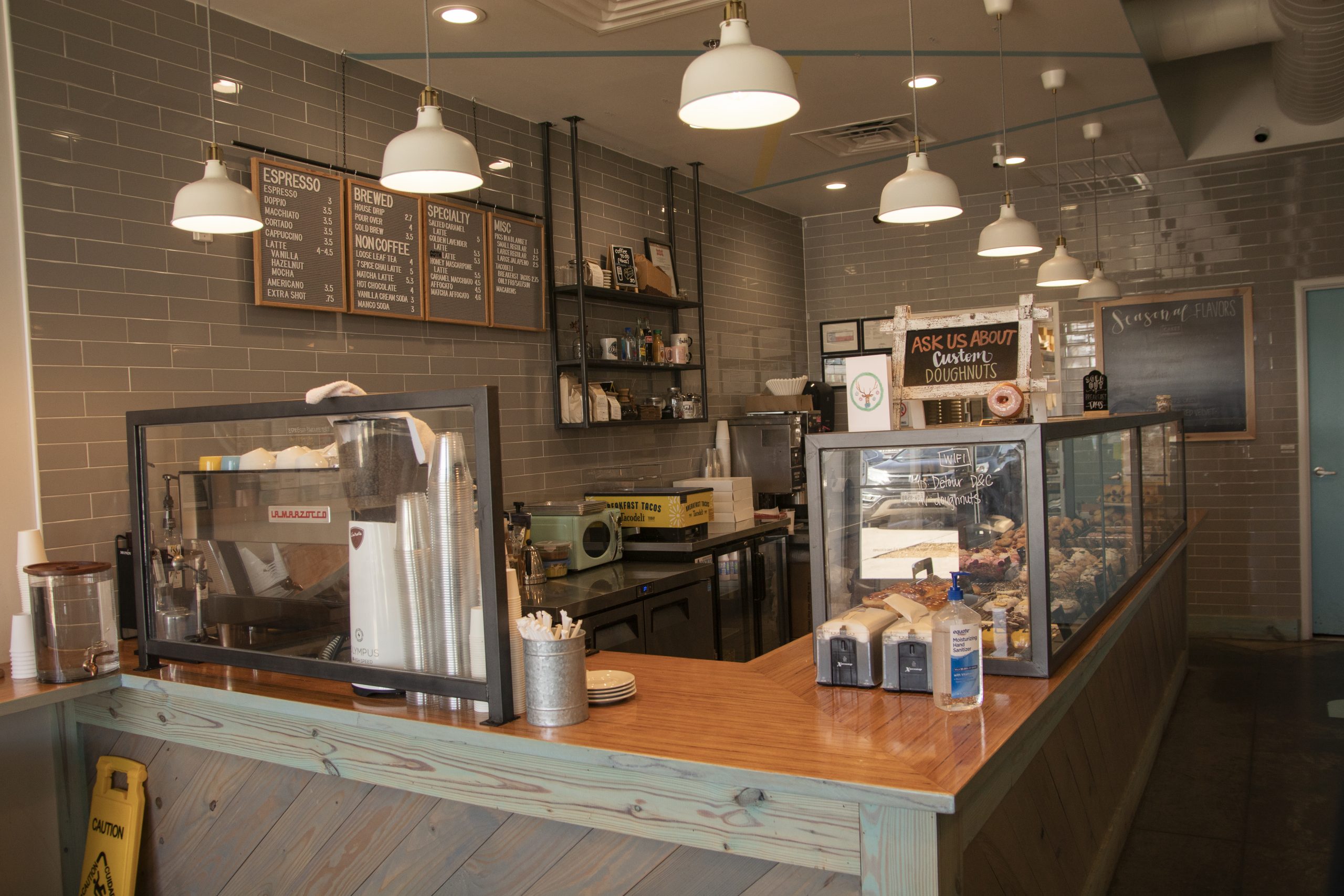 Jinny Cho, owner of Detour Doughnuts and Coffee, graduated from UTD with a biomedical engineering degree in 2016. Photo by Calis Lim | Mercury Staff

As the spring semester picks back up, most of us are going to have to readjust to the hectic schedule of being students. While we get back into the swing of balancing our school work, I was excited to be able to go to Detour Doughnuts for a quick break, all while supporting a UTD alumni.

Tucked away in Frisco, Detour Doughnuts can be easy to miss. Quaint and casual, the overhead sign reading, “Coffee and Donuts” hangs over a deceptively small shop.

Displayed under the counter, the array of donuts show off the shop’s commitment to seasonality and creativity. Despite being a normally picky eater, I felt particularly excited to try their variety of flavors including Rose Champagne, Dark Chocolate Raspberry and Everything Bagel. As I later tried their various flavors, a distinct lack of sweetness stuck out to me. As opposed to the flood of sugar accompanying most donuts, each donut’s flavor rang true to what was advertised.

While I generally tend to enjoy sweeter foods, especially a traditional donut, I didn’t find any donut bland; rather, each more than made up for a lack of sugar with its own unique flavor. Particularly, the Everything Bagel donut seemed to lack any kind of sweetness altogether. Instead, the donuts provided a welcomed texture change to a traditional everything bagel, replacing the chewy taste and texture of a bagel with the soft and pillowy texture of a donut. As I went through the rest of the menu, I came to find Detour’s commitment to strong, natural flavors consistent.

Founder, owner and operator Jinny Cho maintains a busy schedule so she can have hands-on involvement in running the store.

“I get up anywhere between three or four o’clock in the morning, then we make donuts and I talk to my customers and use Instagram a lot. Then we do the same thing the next day,” Cho said. “The most important part of this game is just being able to do that every day. You have to be able to get up at 4:00 in the morning every day and just keep going. We open at 6:00 and we make fresh doughnuts every day. (It’s) just one of those things that you have to do. It needs to be fresh.”

Born in Korea, Cho moved to Dallas when she was a child and said she grew up helping her parents run their doughnut shop. Later on, as a UTD student she said she came to know the area even better, making opening in Frisco an easy decision.

“I came here when I was six to seven. I basically grew up in the Dallas area, Frisco and I grew up in Plano primarily,” she said. “I moved around everywhere, literally every single school district and the DFW suburbs. My parents moved to Frisco because they also have a store not too far away, and they wanted to be closer to their store.”

As a mother, Cho said it’s important to find time for her family on top of running her store. Having opened Detour Doughnuts a year and a half ago, she said it’s becoming easier for her to find the right balance.

“I have a two-year-old son. He comes in all the time and he wreaks havoc. Now he’s tall enough that he can reach a doughnut hole, and so he’ll be like, ‘Oh, I want those,’ and he just grabs it himself,” she said. “It’s pretty cute. I don’t have a whole lot of time, but I have to make time for sure.”

Cho helped her family run their doughnut shop when she was growing up, and said her parents now help her run her own. She said the experience of growing up working alongside her parents, as well as a desire to create her own doughnuts is what inspired her to open Detour Doughnuts.

“Now when I think back to it, it was a lot of fun. I slept in every corner you could think of, I helped out quite a lot, made a lot of friends, even at the store,” she said. “That was good. I got to spend time with my parents, most importantly. They didn’t just drop me off somewhere, I was there with them.”

As Detour Doughnuts continues to grow, Cho said she hopes to take a step back from her hands-on approach. Besides spending more time with her family, she said she hopes more time off will allow her to be more creative in creating doughnuts.

“I want to let (Detour Doughnuts) grow organically. I’m still in experiment mode,” Cho said. “There’s so many things that I want to make that I haven’t had the time to make yet. I’m trying to give myself more time to make new things.”