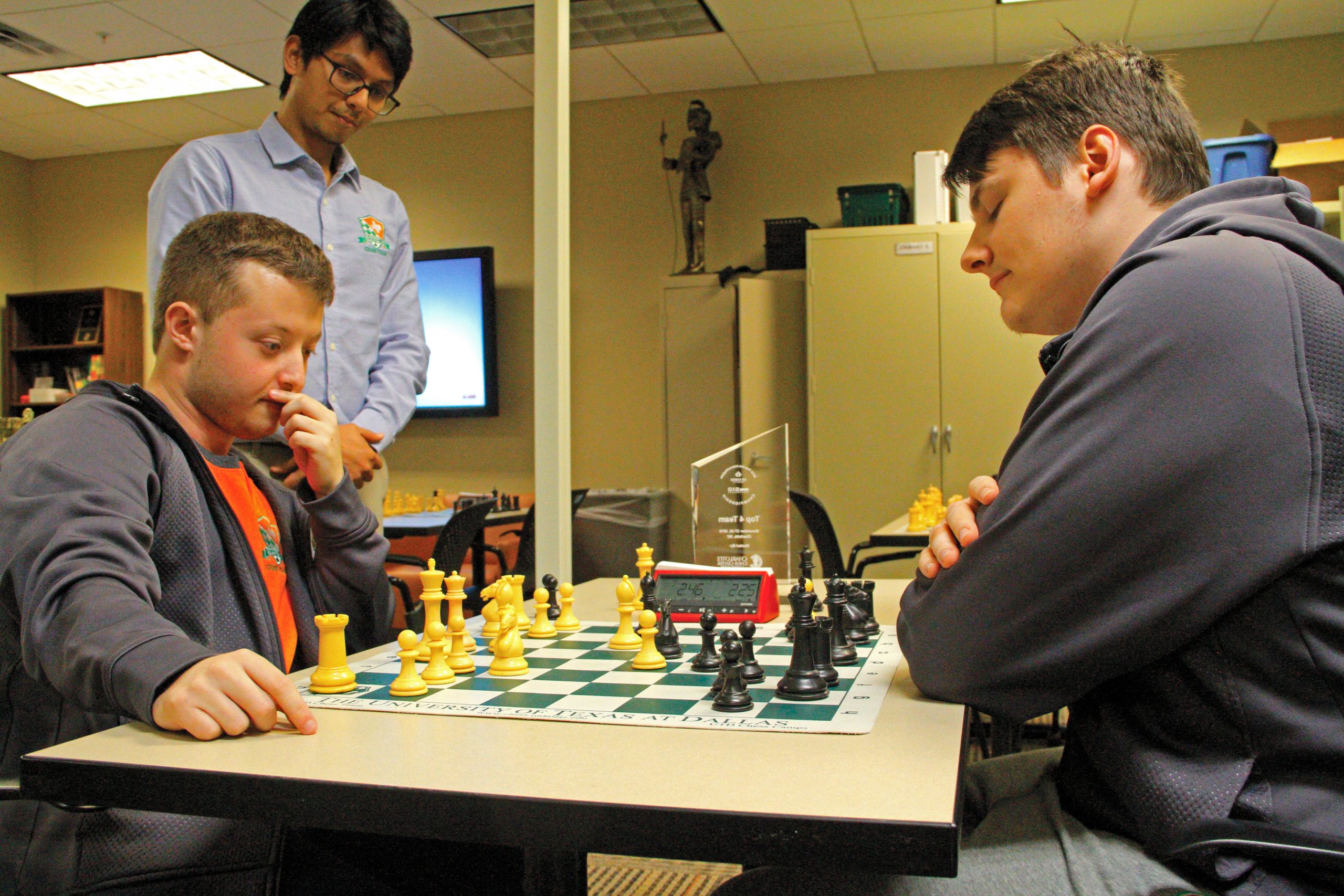 The UTD chess team has over two months left to prepare for the 2020 President's Cup, where they will be competing against teams from Webster University, Texas Tech and Saint Louis University. Photo by Roshan Khichi | Mercury Staff

Fresh off their qualifying fourth-place finish at the Pan-American Intercollegiate Team Chess Championship in December, the UTD chess team is gearing up to head to the 2020 President’s Cup for the second year in a row.

Held at the Marshall Chess Club in New York, the 2020 President’s Cup will host UTD, Webster University, Texas Tech and Saint Louis University. Having competed against teams from all three at the qualifying Pan-American Championship, coach Julio Sadorra said their recent experiences will factor into their strategy going in.

“Definitely, a factor here is playing style. So, if depending on our prediction they line up tactical players in the top boards, positional person on the lower boards, we will adjust accordingly,” Sadorra said. “Recently we were just discussing this, we have to work on our strengths, take opponents out of our comfort zone. That can really help us with setting our lineups.”

With the President’s Cup in April, the team has over two months left for preparation. In order for the team to ultimately succeed, Sadorra said it would be important for every player to fully commit to their training.

“Before I became a grandmaster, I was the hungriest, I would do anything … so the least I could do, I think the most important thing I could do is to cultivate that hunger,” Sadorra said. “For this Final Four, I think all of them need to want it, considering the competition that we’re facing. If you have that strong mind, it doesn’t matter even if you’re playing a world champion. Because if you know you put it on the table in training, what have we got to lose?”

This year, UTD earned a qualifying spot among 63 other teams. That number, Sadorra said, is indicative of a growing field of intercollegiate chess teams.

“The competition has really gained in strength. Before it was just two universities fighting for the top spots: University of Maryland Baltimore County and UT Dallas. When I applied for a scholarship here, it was just those two and maybe a few others tailing behind,” Sadorra said. “In 2012, other chess programs sprung up and they started bringing in grandmasters from different countries. So we’re competing against other grandmasters, you could even say super-grandmasters on the other teams.”

UTD is headed to the Final Four for the 17th time, with the championship first having taken place 19 years ago. Despite having UTD’s record to uphold, Sadorra said it wasn’t a negative source of pressure.

“It’s an encouragement. I combine these achievements with my titles we won when I was a student,” Sadorra said. “Still yet to win Final Four, but I see it as encouragement. Despite the increasing number of grandmasters and strong competition, the fact that we’re still up there in the top speaks volumes. It’s a winning culture. Winners win.”

Similarly, grandmaster and computer science junior Razvan Preotu said he didn’t feel any pressure coming from UTD’s record. Heading to his second President’s Cup, Preotu said it would be important for him and his team to continue improving before the competition.

“It’s constantly balancing school with chess,” Preotu said. “So, sometimes I even have to do some homework in between some games, or before the tournament, where if I didn’t have the tournament I could do later. Just lots of planning ahead.”

Unlike other chess competitions, the President’s Cup limits competing universities to one team. Despite the national scale of the event, Preotu said he felt more pressure to compete at the Pan-American competition.

“I think that’s common for most things though. When you start learning something, you find it fascinating and stuff,” he said. “So, it’s a lot of fun and then once you get better at it, results are more important and start to become more important to you.”

“You’ve heard people say many times, ‘You have to earn your stripes.’ In other words, you can’t rest on your laurels. So that’s part of that fighting spirit, you know?” Stallings said. “Yeah, we did that last year. Great. What are we going to do now? You really can’t rely on those past successes, because everybody’s preparing for you.”

Despite appearing relatively calm in comparison to other sports, Stallings said that chess evokes emotions that often affect performance.

“I think a lot of people outside of chess underestimate the part emotions play in the game. They think that you’re just sitting there thinking like a computer. That’s all you’re doing. That’s not true,” Stallings said. “As different things happen or come up, you have emotions. That’s why the coach instilling confidence in the players, that fighting spirit, is very important, and when those things do happen, they will be ready to deal with them.”