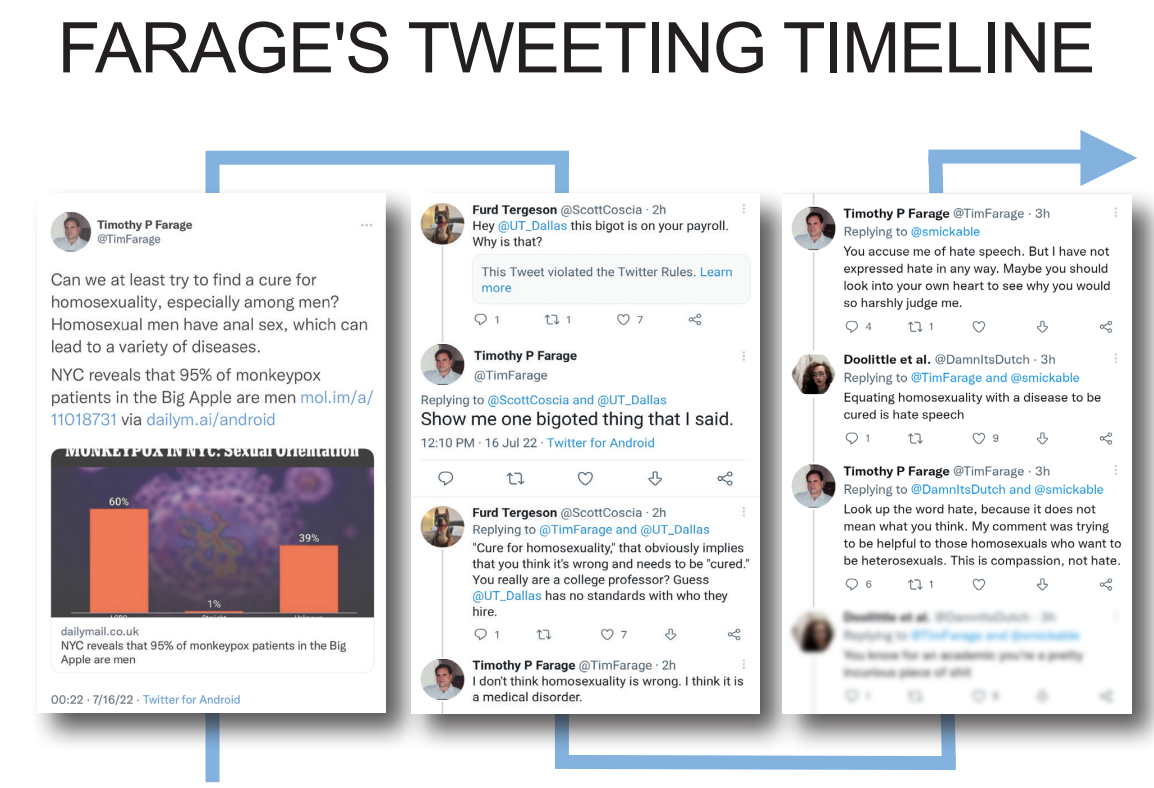 Farage posted "can we at least try to find a cure for homosexuality..." on Twitter, Saturday, July 16, sparking outrage within the UTD community. Over the weekend, Farage replied to comments on his post defending his position, even after the initial post was taken down by Twitter for "hate speech." On July 18, Farage's account was made unavailable.

Students and alumni are pushing for UTD to fire or censure Timothy Farage, a senior computer science lecturer, after he tweeted, “Can we at least try to find a cure for homosexuality, especially among men?” in a now-deleted tweet commenting about the monkeypox outbreak in New York.

The July 15 tweet spread rapidly throughout the UTD LGBTQ+ community, and shortly after The Mercury first reported on the tweet, multiple LGBTQ+-affiliated campus organizations denounced the tweet and called for UTD administration to take action against Farage. UTD issued a statement on July 16 pushing back against Farage’s comments.

“We unequivocally denounce statements that disrespect groups or individual members of our community,” UTD said. “UT Dallas is committed to providing an educational, living and working environment that is welcoming, respectful and inclusive.”

Farage continued to defend his points on Twitter and in response to The Mercury and other emails from students. Farage contended that homosexuality was a medical disorder and that research for a cure should be done in service to homosexual people who wanted to be heterosexual.

“I was being compassionate by asking if a cure for homosexuality could be found,” Farage said in an email. “I don’t know if it can, but I’d like to see research about it. I have had four homosexual friends (three men and one woman) who wished they were heterosexual. There must be many others who feel the same way.”

Two days after the tweet, the School of Engineering and Computer Science made an official statement via school-wide email saying that they were “appalled” by Farage’s comments. As an immediate measure, ECS made alternative sections to all of Farage’s courses available for students who wished to take a different professor. The next day, the university confirmed that there was an ongoing investigation into complaints about the tweets.

The events led the Foundation for Individual Rights and Expression to take on Farage’s case, demanding that UTD end any ongoing investigation as a result of the tweet. In a publicly issued letter to UTD President Richard Benson, FIRE said that any investigation itself infringed upon Farage’s protected speech. In the letter, FIRE also put out a waiver signed by Farage that released all information the university had concerning Farage’s “employment, status, or relationship with the Institution”.

Farage has since deactivated his Twitter account, rendering all of his tweets and replies unavailable for public view. In his last response to The Mercury’s requests for comment, Farage made one final comment about his courses.

“I’m just going to say this. My students love me and I love them,” Farage said. “My sections fill up very quickly.”