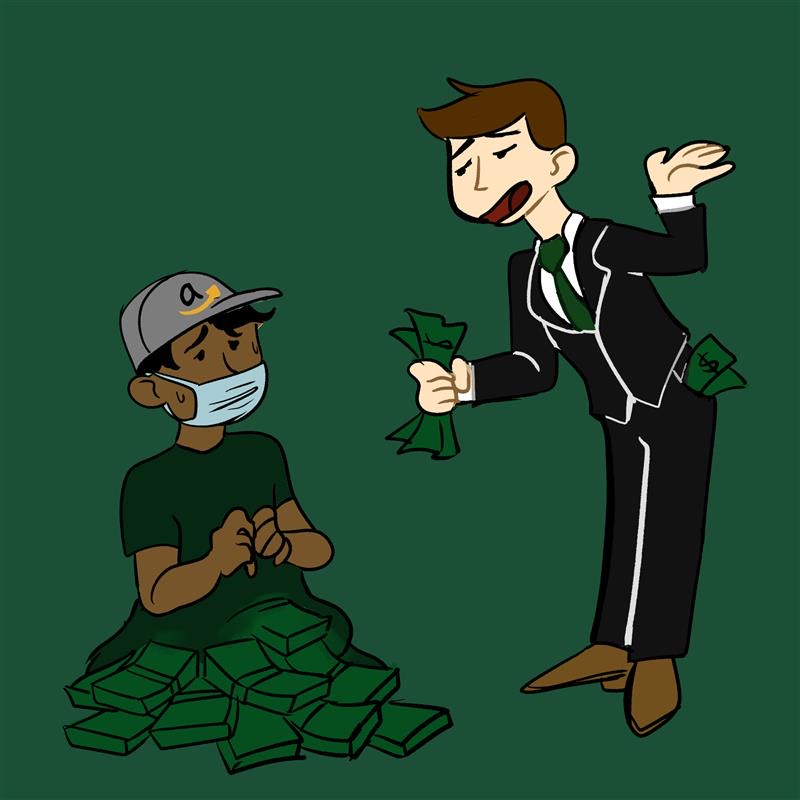 How the COVID-19 response prioritizes corporations over individuals

In the wake of the novel coronavirus pandemic, the U.S. has seen a sharp increase in unemployment claims, with nearly 17 million filings in the last three weeks. Experts say that social distancing and isolation is likely to last through May and businesses have had to furlough or fire staff to stay afloat. Amid all of this, how do we protect the economy? Texas’s Lieutenant Governor Dan Patrick recommends sacrificing your loved ones.

In a March 23 appearance on Fox News, Patrick said that he’d be willing to risk his life for the economy and suggested that other elderly citizens would be willing to do the same. In just a few sentences, he made very clear what the bottom 90% have known all along: staunch conservatives see citizens as disposable in their never-ending quest for money.

On March 27, President Donald Trump signed the $2.2 trillion CARES Act, which freed up billions of dollars for Wall Street and gave taxpayers a paltry one-time payment of $1,200 with several restrictions on eligibility. Big companies will fare just fine, it’s the working class that will bear the brunt of COVID-19’s economic impact.

The CARES act provided $500 billion for big corporations and $560 billion for individuals. Democrats tried to put safeguards in place for the corporate bailout money to avoid making the same mistakes of the 2008 bailout. According to ProPublica, corporate profits were rising by 2009, but the median household income took nine years to get above what it was in 2007. Corporations have been and will be saved, average citizens have been and will be left to fend for themselves. Chamath Palihapitiya, venture capitalist and CEO of Social Capital, said it himself in an interview with CNBC.

“People are getting wiped out, and right now rich CEOs are not, boards that had horrible governance are not, hedge funds are not — people are,” he said.

So how do we fix this? For now, we can’t. The oversight Democrats put in place for the corporate bailout has been all but wiped away since Trump removed acting inspector general Glenn Fine from his position as the head of a coronavirus spending oversight board. Now the president, along with people like Patrick and Treasury Secretary Steve Mnuchin are rushing to get the government open by May, knowing preventable deaths will occur should that happen.

The work to fix a situation like this must be done before it happens: in the voting booth.

Texas governor Greg Abbott didn’t issue a statewide stay-at-home order until March 31, long after the gravity of COVID-19 became clear. Collin County Judge Chris Hill never ordered non-essential businesses to close, they only did so once Abbott’s order took effect. Of course, federal elections are important, but state and local governments played a big role in deciding how citizens would fare in the wake of COVID-19. California governor Gavin Newsom issued an executive order in response to the pandemic giving local governments the power to pause evictions for renters through May 31 and several cities, including San Francisco and Los Angeles, have done so. While the Texas Supreme Court has halted eviction proceedings until April 19, renters who receive a notice to vacate are still expected to do so.

All elections matter, and so does your anger. Hold onto it and demand your voice be heard — your life may depend on it.

My daughter, the healthcare worker