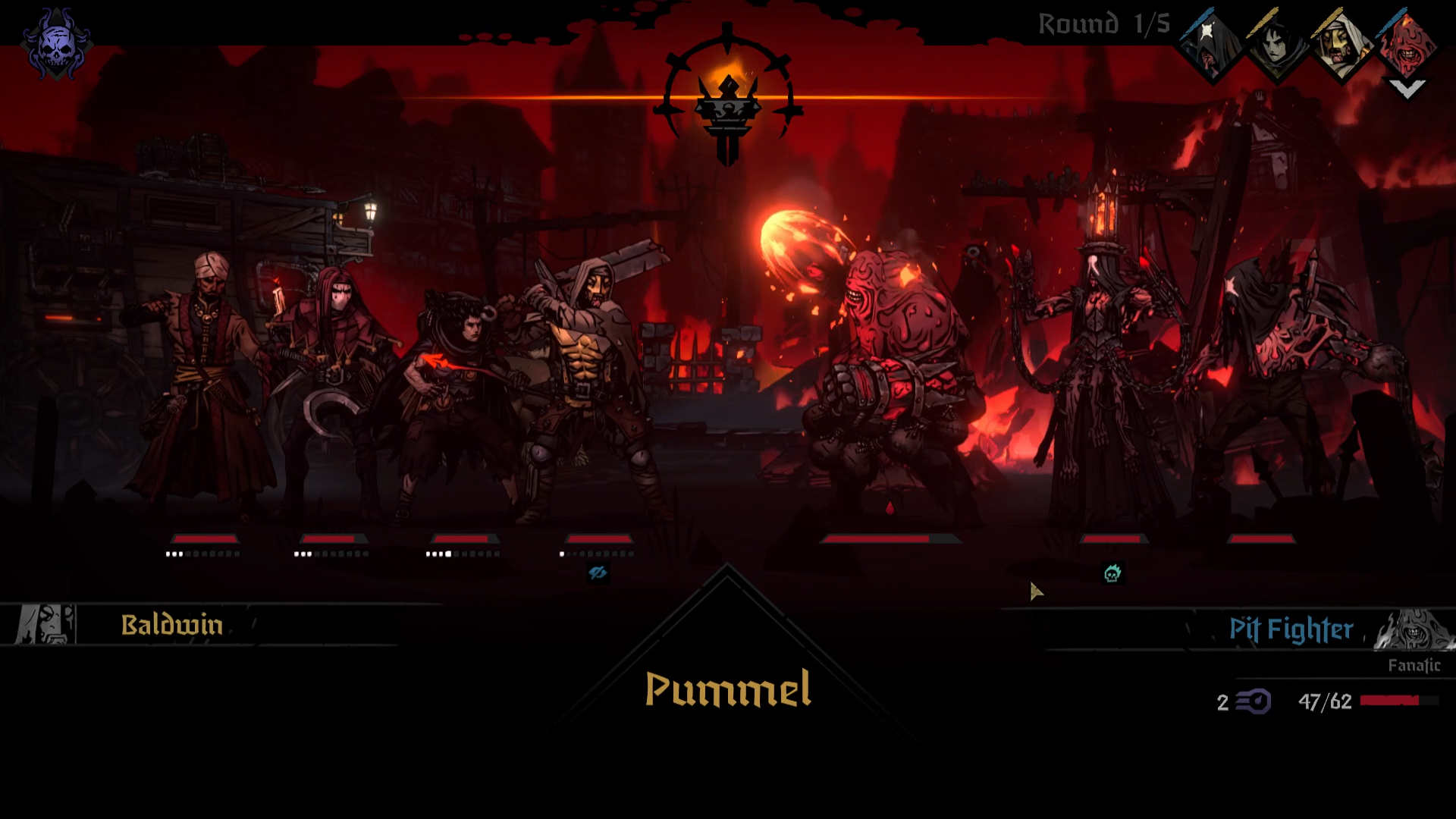 Ruin has found us all once again. The Darkest Dungeon 2 early access release invites players into a world that has already undergone the Lovecraftian apocalypse and demands that they make the journey to save it.

The sequel differs from the original in a few key ways. While it is still a turn-based rogue-lite with a party of four, there is no home base to return to. Instead, the player chooses four characters to travel with at the beginning of the game, and once chosen there is no changing characters, save for replacing one after death. The player than travels through the apocalypse in a stagecoach, managing the stress, health and equipment of the party while battling bandits, cannibals, cultists and other nightmarish creatures. Along the way, the player must manage the Flame, a representation of hope that depletes as they travel through the wasteland and prepare to defeat the final boss (or at least, the boss currently available).

With this gameplay loop, the game itself becomes more rogue-lite in nature. It remains brutally difficult, with frail characters needing constant management to stay alive and sane. The premise of four misfits trying to act like heroes is expanded on much more in this game than the last with the removal of the sim city management. Instead of players splitting their attention between upgrading a base and constantly recruiting different party members, they can focus on managing a single party of characters and their relationships, which creates a more engaging and personal gameplay loop.

Darkest Dungeon 2 also enforces its premise with a new affinity system. When characters interact with each other at key events, they can gain or lose affinity, building positive relationships that give buffs in combat or negative relationships that actively harm the party’s combat ability. For example, if one character is suspicious of another, they’ll prevent them from using healing abilities at key moments or weaken their attacks. If two characters have an inseparable relationship, they’ll randomly heal each other and relieve each other of their stress, opening important actions for attacking instead of healing.

Being an early access game, the story itself is still barebones. For the main plot, we only know that we are going to remove the “shackles of denial” to begin the salvation of the world. This point is interesting, as generally a lot of Lovecraftian horror media is focused around delaying the inevitable collapse caused by a hand of unseen terrors. But what happens when the collapse has already happened? When the gruesome monsters are seen? So far, this has manifested in a mild desensitization of the horrors since the entire world is composed of them. The unseen dark god isn’t as terrifying when it’s observed.

The story is saved by the character backstories, available to see at shrines of reflection in the wasteland. Each character has a multi-chapter backstory that, upon completion, unlocks new skills, and witnessing the terrible things that each character has done helps reinforce that your party members are not inherently good—they are just a band of misfits trying to take a last stand against the end. The backstories are highly engaging and perfectly narrated, motivating the player to look for more hero shrines not just to unlock additional permanent combat skills, but to see each character’s horrifying story come to a close.

This narrator from the first game returns with the same voice that produces an excellent performance. Nearly every action you can take is bookended with the narrator intoning the consequences in ominous fashion, adding to the horrifying atmosphere. Everybody should have an old man narrating their life with lines such as “Forward now, into the crumbling chaos of the world!” This in combination with a somber and desperate soundtrack reinforces the bleak atmosphere.

However, if you, like me, are addicted to the “just one more try” mindset that a good rogue-lite inspires, then the early release of Darkest Dungeon 2 will satisfy. Slimming down the game and focusing more on its characters and combat have made the sequel more engaging than the first installment, and the variety of party combinations will keep players coming back for more, ever vying to save the world from the ruin that has already come for us all.