Curious Comets Vol. 2: Why are there t-shirts in the Green Center atrium? 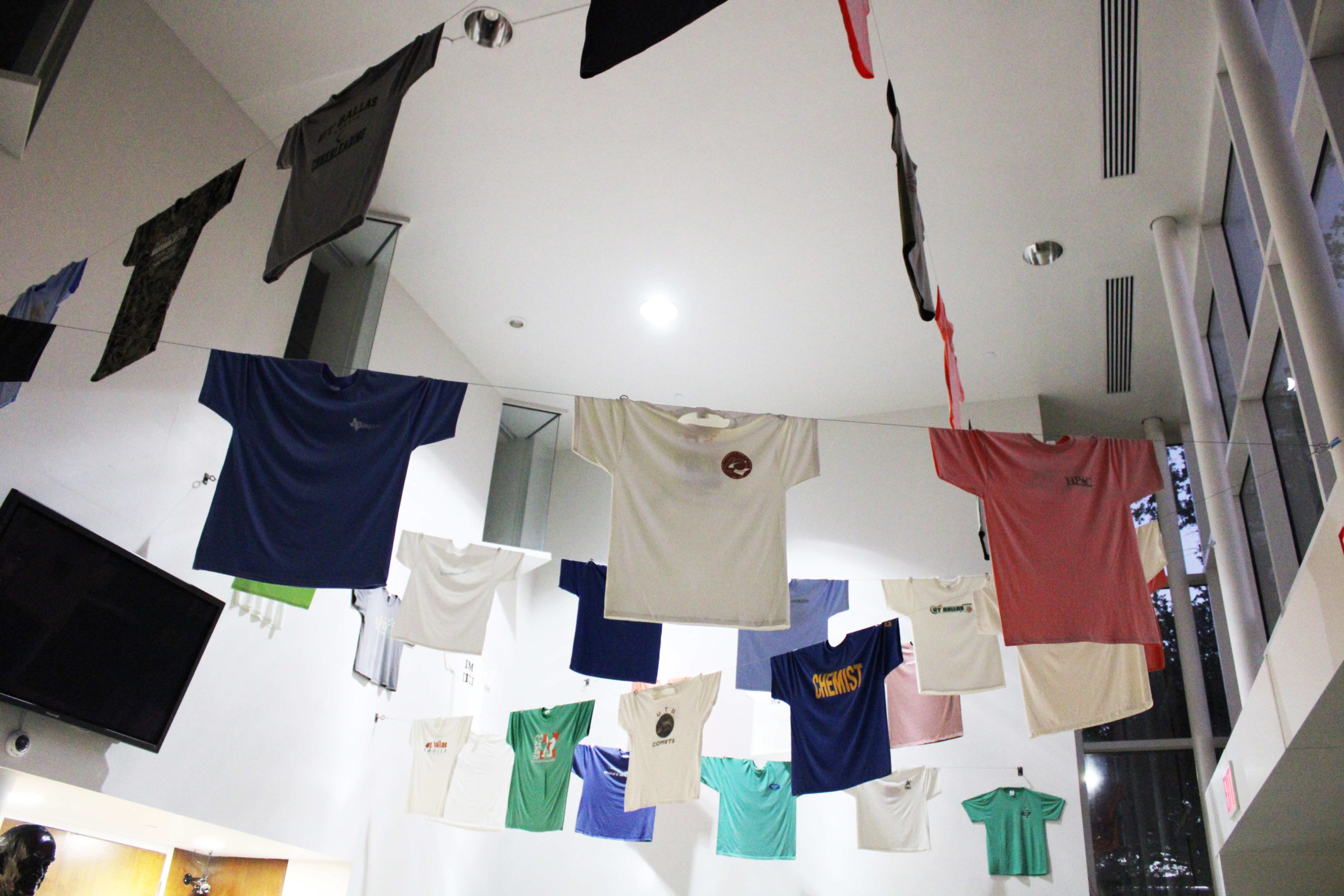 "I jokingly refer to it when students or parents come through, ‘Think of this as Westminster Abbey with the battle flags of the British army in the sky and they're gradually deteriorating. It's our remembering of the past." — Dean Edward Harhpam. Photo by Admaris Dominguez | Mercury Staff

These curiosity-inducing shirts hang unapologetically from a web of wire clotheslines. It’s a striking visual, if a bit mystifying: the exhibit fulfills no discernable purpose, nor would the array of fading cotton reasonably be considered beautiful by any but the most charitable observer. A curious Comet might find the small plaque acknowledging that the shirts were donated by former Dean of Undergraduate Education Michael Coleman, but even that does little to explain their continued presence more than a decade after his retirement.

According to Dean of the Honors College Edward Harpham – who served as Associate Dean under Coleman – the exhibit was initially created as a temporary tribute to Coleman’s significance to the honors program during his time as Dean of Undergraduate Education.

“Coleman was getting ready to retire, and he had all these t-shirts,” Harpham said. “He’d been collecting all these t-shirts over the years, particularly in the 1990s after we got freshmen because as you know, freshmen accumulate t-shirts. So, he made an effort to collect them as well. Okay – what do you do with all these t-shirts? You don’t take them with you; you’re not going to wear them. So, he came up with a neat idea: we were going to do an artistic display for maybe a month or two months before he left.”

Fast-forward more than a decade later, however, and those t-shirts remain hanging from the wall. But Harpham wasn’t struck with a bout of sentimentality – in fact, it was an accidental discovery that prompted him to keep the t-shirts hanging.

“Why did we leave the shirts up? … The reason,” Harpham said, “was because this was a terribly-designed building. The University redesigned the downstairs when they moved [the Honors College] out of the administration building, and it won all of these awards. But if you were actually down there, it was a terrible place to have a conversation with anyone: the echo was too much, and the acoustics were horrible. But we discovered this little display was the perfect ballast: it deadened the sound and actually made the lobby the perfect place to have a reception!”

So, while the t-shirts may seem like just another quirk of campus, they actually serve a useful function. Harpham said that the plan is for the display to remain until Green Center is demolished.

“I jokingly refer to it when students come through or parents come through, ‘Think of this as Westminster Abbey with the battle flags of the British army in the sky and they’re gradually deteriorating,’” Harpham said. “It’s our remembering of the past. It’s a great display. You kind of look at that and everybody goes, what the hell is that? Or people say, ‘Well, go to the Green Center. You can’t tell what the Green Center is, but look for the t-shirts.’”

From quirky student-themed art display to acoustic baffling to eccentric bit of campus lore, Coleman’s t-shirts have come full circle. Harpham analogized it to the bust of Cecil Green or the spirit rocks – another one of Coleman’s initiatives – one of a handful of traditions that make UTD distinct.

“It’s a neat story about UT Dallas. And we have so few traditions – so that one’s kind of silly, but I really like it. And boy is it fun to tell the parents, too. When we give the students tours, we go through and show them the t-shirts, tell them to rub Mr. Green’s head, and it helps personify this University. And until I’m told to take it down, I won’t, because I think it’s kind of cool.”