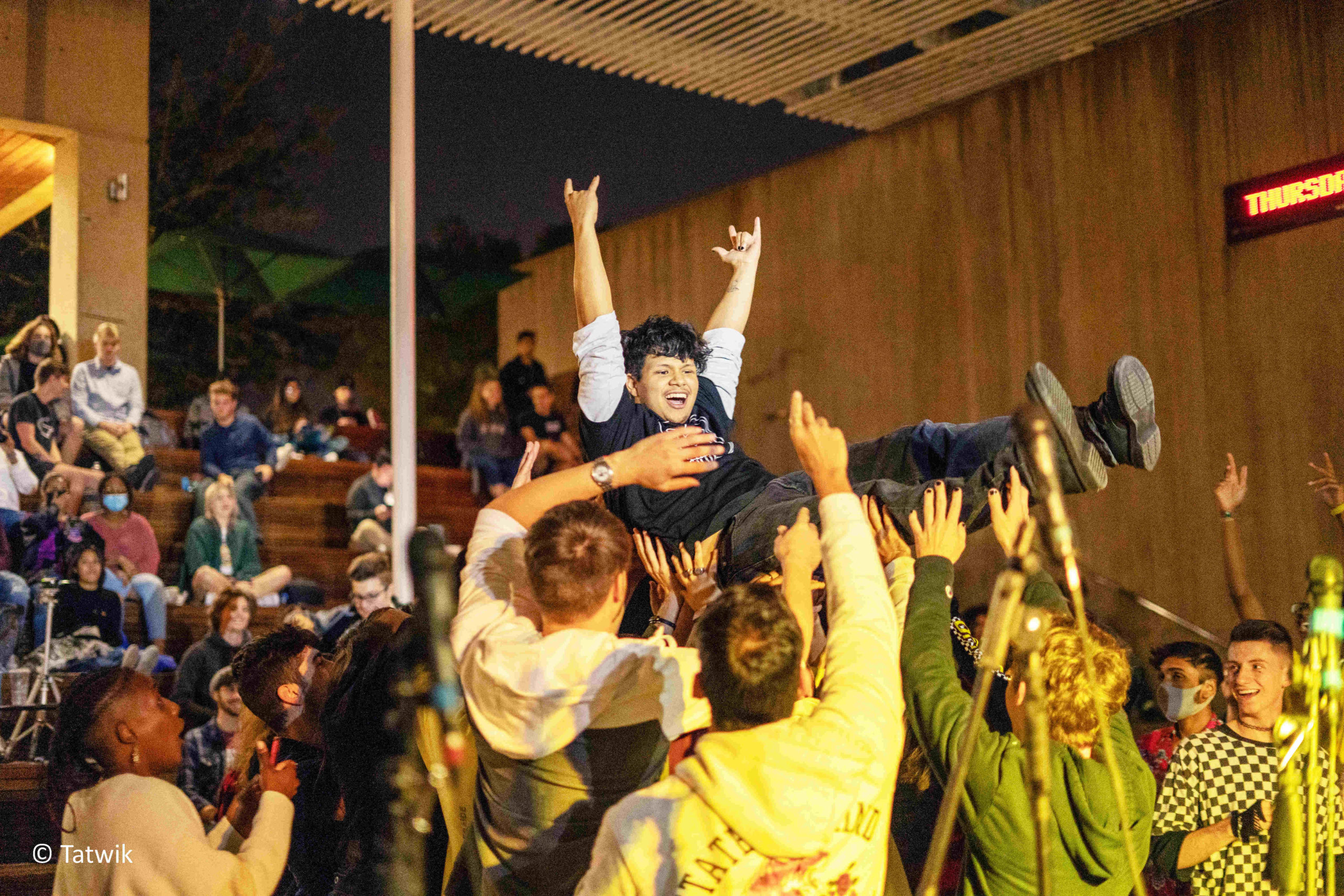 "I have been listening to this music since middle school, and I think the reason I like it is because the lyrics and music really resonate with me. So, hearing it live and hearing everyone else in the crowd sing it and dance to it was definetly an experience." — Karla Budic, international political economy freshman. Photo courtesy of Tatwik Bodepudi

Strings Attached, a student-run music club that started in December 2019 as a place for UTD’s hobbyist musicians to connect, has rapidly grown into a community that unites students from all sides of the music industry. Their largest performance of the semester to date, “Emo Nite,” is the product of several months of planning and is a testament to the club’s harmony.

Emo Nite – which took place on Oct. 28 at the Plinth – showcased a variety of emo and hardcore punk rock songs, chosen by the club members who performed. The event was meant to recreate the atmosphere of a rock concert, and the interactions between the Strings Attached members and the audience created an open and lively concert environment. Overall, the performance was extremely dynamic, and the familial relationship between the club members helped bring the music to life.

Karla Budic, an international political economy freshman, said of Emo Nite, “I have been listening to this genre of music since middle school, and I think the reason I like it is because the lyrics and music really resonate with me. So, hearing it live and hearing everyone else in the crowd sing it and dance to it was definitely an experience.”

Starting as a club that was created only for stringed instrumentalists, Strings Attached has evolved into an organization that includes drummers, vocalists and even students who are interested in audio mixing and production. Although the members are of different ages, cultures and majors, they unite under their love for music and performance.

Through their weekly practices, the club has fostered a sense of community and belonging for several UTD students. It was from these practices that the idea came for Emo Nite, which was created to help club members practice and perform their favorite songs live for other Comets.

Club vice president Cy Feagin, a business administration sophomore, said, “I think that our synergy is what makes us different. That’s something that is very hard for bands to develop, and I’m not saying that we are perfect with our chemistry. But for people to come out here, and one minute play with three instrumentalists in one song and then two songs later play with a completely different set [of people], I think that is really cool.”

Strings Attached is structured in a unique way – it revolves around giving each band member a choice in which songs to play. Usually, whoever wants to play a certain song can play it then rotate out for the next piece, in contrast to a typical band or orchestra where all the members play every piece together. In Strings Attached, the club members must play closely with different musicians for each song but can freely choose which songs to perform in.

Business administration senior Carlos Jong, the president and founder of Strings Attached, highlighted the importance of networking and openly communicating to create such a large and uniquely connected community. Pre-pandemic, Strings Attached performed some gigs at The Pub; now, coming out of quarantine, the club is hoping to host more concerts and perhaps expand further. Emo Nite was the product of several months of planning, networking, practicing and advertising, and Jong hopes that Strings Attached will be able to create similar events in the future.

“You have to relate to people, and it’s a good time to grow now,” Jong said. “Originally, [Strings Attached] was like a circle where people could play, but we attracted people because they wanted to join in and have fun.”

Computer science junior and Strings Attached band member Norris Plaisance said that music has been a defining part of all the band members’ lives, and the ability to share that passion with others makes the club such an important community to them. Plaisance also emphasized how much the club loves playing together.

“[Strings Attached] lets everybody in and you can play whatever you want. The cool part is that the songs people listen to are not based on how good they are [at music]. Playing Green Day, for example, is just a few power chords, but people at the highest level can play it and people at the lowest level can learn it. The fact that they both like the song lets them play together.”