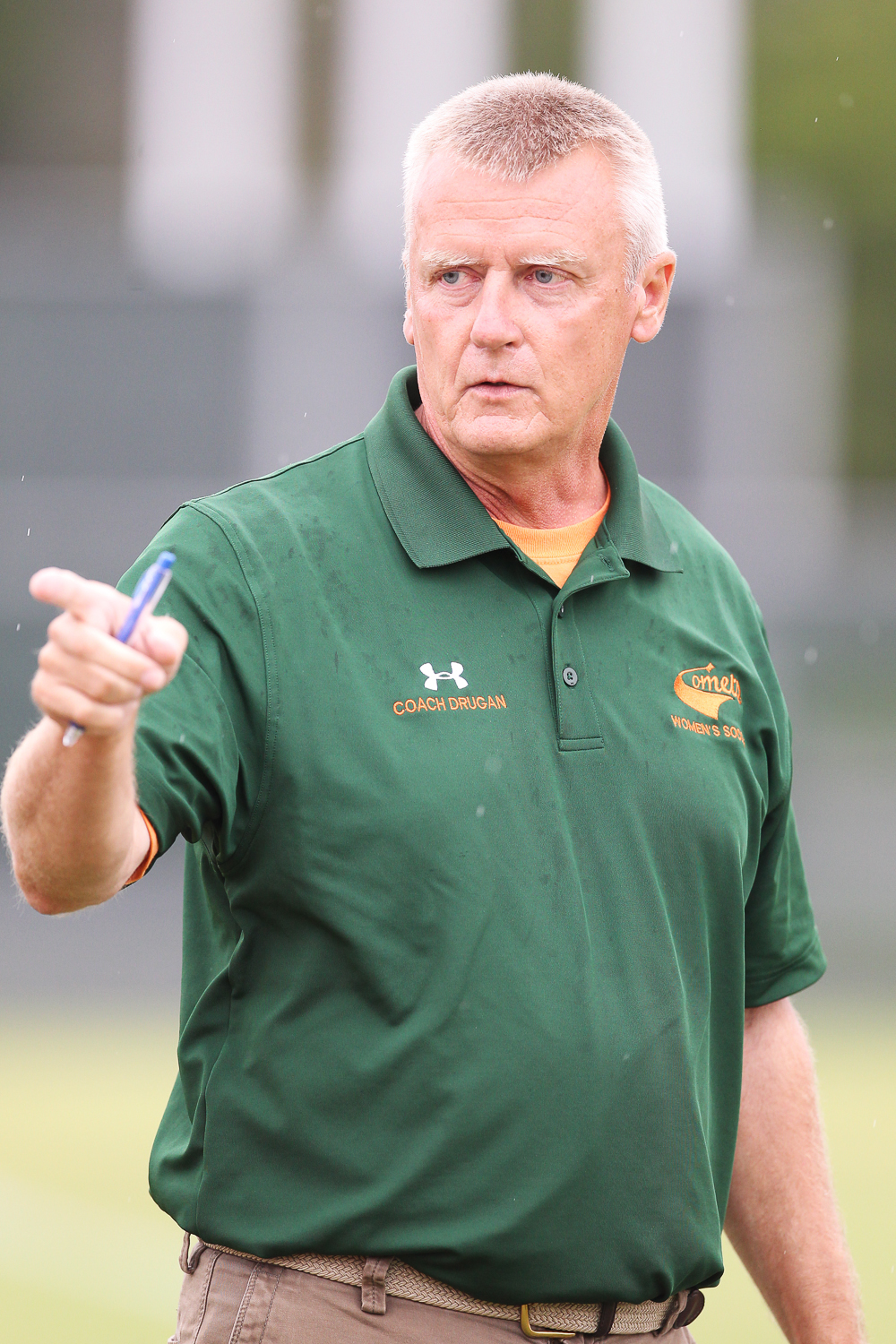 Of all the sports disrupted by COVID last year, those on the fall schedule arguably got the short end of the stick. After having their seasons canceled then rescheduled to the spring by the ASC, they had to wrestle with both pre-vaccination preparation and the chaos of a polar vortex just to play a season with no NCAA tournament at the end of it. I sat down (virtually) with women’s soccer coach Kanute Drugan to talk about the challenges of last year in the context of the upcoming fall 2021 soccer season. Here are a few key takeaways:

What did the fall 2020 season look like for the team after all the COVID-related adjustments?

“It had more challenges than I had initially expected. But one of the things that I was so impressed with our girls was how resilient they were – maneuvering their way through the fall, where we didn’t get to play any games and didn’t have a regular practice schedule. And then the same thing in the spring, where right as we thought we were going to get started we ran right into the Texas ‘Big Freeze’ … so the entire season was just unusual from when we moved in on August 10 all the way up until about February 10. Then we were finally able to build up a rhythm and get back to something similar to what we’d normally have, even though it obviously wasn’t in the fall.”

How did those challenges impact the team, and how did they perform after?

“I think they got stronger. I know mentally and emotionally they benefited from that in a way they might not otherwise have during their four years in college. And then for them to overcome everything, go undefeated and win our first division championship in 17 years, it was incredible, and I am so extremely proud of my girls.”

How do last year’s schedule changes impact the upcoming season?

“There are a lot of advantages to having less downtime [as last season was played in the spring]. One is that we’re moving right out of that season into conditioning for the fall season, so there’s really no downtime where they might lose that conditioning. Another advantage is that the experience of going undefeated and winning the division championship last season is still fairly strong in these girls’ memories. Had it been nine months (Nov. 15-Aug. 15) before we got back together again, the momentum from that season might have died out a little. Instead, we’re going to get to ride that confidence into this one.

There are also some unexpected challenges. For example, because the NCAA extended everybody’s eligibility, while we had one girl graduate, we didn’t lose anybody off the roster. And now we’ve also got freshmen coming in, recruited a year prior, and so a challenge we’re discovering – and going to face for the next four years – is figuring out how to construct the roster, allocate playing time and still maintain a positive attitude and commitment to how we do things throughout the squad. And since the season ended on April 10, not a day has gone by where a portion of my day hasn’t been consumed with trying to figure out the best approach to this challenge.”

What should Comets be looking forward to from your team in the upcoming semester?

“I think there’s an enthusiasm here, beyond just the excitement of beginning a new semester, that ‘we have unfinished business.’ The last season was a good breakthrough – tells us that we can do what we’ve always believed ourselves capable of, and now we want to go out and accomplish more. Hopefully, we’re going to win the regular-season championship then win the conference championship this year, and then see what we can accomplish at the national level.

And because we do have everyone coming back, this is a well-seasoned team. Last year, I had 19 freshmen – they’re not freshmen anymore. This team understands their formations, they can execute, they’ve figured out their style of play, and they’re ready to come back and win it all. Add the incoming girls to this team, and we have more depth than I think ever before.”

“My anticipation – and I believe that of many of the coaches – before the prevalence of this variant, was that this season would probably be back to normal. As these numbers climb, I have less confidence in that. But as of August 10, 100% of my girls are vaccinated, and the coaching staff, athletic training staff and strength coaches are also fully vaccinated, and I’m extremely proud about that. So, let’s all stay safe, do the right thing and trust that eventually the right thing will happen.”