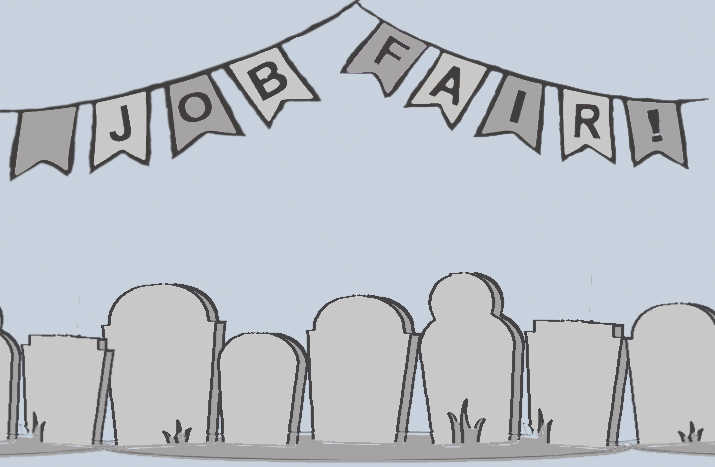 We all have a complicated relationship with jobs—but no other story can capture this complexity in words and visuals like Aminder Dhaliwal’s comic “Dead End Jobs for Ghosts.”

Some days work is the best thing ever; you’re being productive and building toward bigger goals. Other days it doesn’t seem so worth it, and maybe customers are rude, the work is stressful or it consumes all your time, leaving no room for anything other than rest. If you’ve been looking for a sign to focus more on yourself and your personal relationships rather than slaving away at unsatisfying work, this comic is it.

As the title suggests, “Dead End Jobs for Ghosts”is about what happens after we die, and Dhaliwal envisions it as getting a job in a compassionate satire on the unfairness of capitalism. The story follows two people from different walks of life falling into the same trap, from which they must eventually learn to walk away and move on. This lesson, however, is learned not during their lifetimes, but in their afterlives through the jobs they get as ghosts.

The first perspective and character we are presented with is Priya Joshi, a 16-year-old girl who dies in a car crash during her driving test. Through her process of coming to terms with her death and the fact that she’ll never be able to interact with her family again, we are introduced to a company known as Spectreworks Inc. This company is dedicated to incorporating ghosts into the job market and giving a ghost’s earnings to their chosen living recipients.

At first, Priya applies to Spectreworks to ease the pain and feelings of despair associated with her death. She’s even excited to become a driver for the company’s “self-driving” cars, but eventually that excitement subsides due to how exhausting, thankless and boring it is to work a job just for money. Through Priya’s storyline, readers see how the job market takes advantage of young people’s feelings of helplessness, need for productivity and desire to help their families. To highlight the eventual monotony of a once stimulating job, Dhaliwal sizes and organizes her panels and draws close-ups of objects, people or long-range scenes within those panels. For instance, when Priya searches for and chases the person that caused her car crash, there are a variety of panels that jump off of one another and lead your eyes to different directions. This contrasts with the linear dullness of Priya’s job, where the panels only move your eyes down and sideways.

On the other side of the workforce is an older generation who is loyal and passionate about specific jobs and only really wants recognition in return. However, employers take advantae of that loyalty and passion, as evidenced by the storyline of Philip Smith. He has already been dead for a while when he is presented to us at Spectreworks Inc. Once a factory worker who got fired and died during the automation of the workforce, Smith eventually got his job back from Spectreworks. But things changed after this rehire because he stepped back and realized that before, he was so distracted by the fortune of having a job that he didn’t notice how his passion and pride had dissipated and been exploited.

While Dhaliwal’s main focus in her comic is on the interpersonal, small ways our toxic relationships with work affect us, she does illustrate how they impact us in larger, systematic ways through small snippets of narrative breaks and compelling illustrations placed on the front and back covers and endpapers. For example, at the front of the book we have a formally dressed ghost typing away on her computer in a graveyard; elsewhere, a line of people’s souls float up into the sky with the sentence, “The job market is dead, literally,” printed on top. In the endpapers, there is a scene with a job fair banner hung over a graveyard and Priya’s soul waiting in line among living people for an interview.

In many ways, “Dead End Jobs for Ghosts”is a cautionary tale to not let work or the idea of labor be the key to enriching your life, lest it become all-consuming. In Philip’s case, he participated in the workforce until he dropped; tying his self-worth to his job left him a shell of a person, and even getting recognized for his work didn’t mean much to him in the end. Or in Priya’s case, Dhaliwal cautions readers not to let work take away the time you could have spent with your loved ones. After her family got the check from the money she made at Spectreworks, they weren’t as happy as she had hoped they’d be. This makes her realize that it’s her they miss, not what she could do for them.

As the author herself said about the theme of the comic, “…we often mistake our self-worth with the dollar amount printed on a paycheck. It’s also a very common mistake but also a big one. It takes a lot to remember, it’s who you are and not what you do that counts.” So go take a break from work—go outside, talk to your friends and family or read a book…perhaps “Dead End Jobs for Ghosts.”