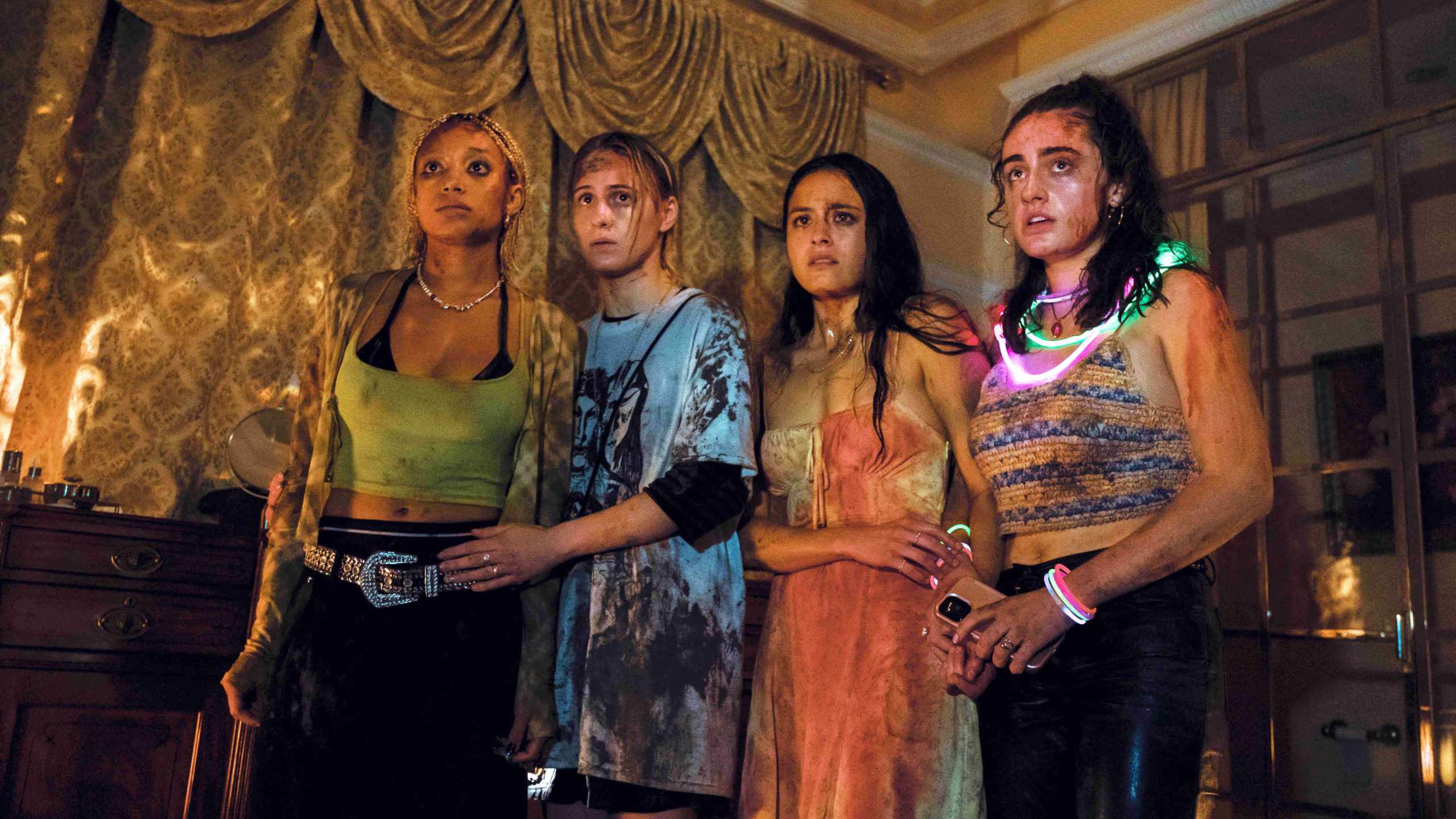 Amandla Stenberg (Sophie), Maria Bakalova (Bee), Chase Sui Wonders (Emma), and Rachel Sennott (Alice) are all trying to survive a murderer and find themselves. Photo courtesy of A24 Pictures.

“You hate-listen to her podcast.” If you are Gen Z, this might sound like a light-hearted joke, even when made by a friend. But what if that friend was accusing you of murder?

Every generation has their version of the classic “cabin in the woods” trope. A group of twenty-somethings go away for the weekend, and somewhere along the line, people end up dead. A24’s new horror comedy—“Bodies Bodies Bodies”—follows the same plot. Paranoia ensues, and one by one, people meet their end. By subverting this classic film trope, “Bodies Bodies Bodies” finds a balance between horror and comedy that shows a nuanced understanding of Gen Z culture.

We are the first generation to grow up completely immersed in social media, and the effects are obvious. While technology connects us, inside, we are more disconnected than ever. This is seen through the film’s themes of isolation and alienation. The plot is primarily told from one of the main character’s points of view—Bee—who is an outsider to the rest of the group. She is working class—not fabulously rich—and she has never met her girlfriend’s friends before. While Bee and Sophie’s relationship is the core of this story, there is always an element of youthful awkwardness to the way they interact with one another. Their navigation of relationships feels very realistic to the way our generation acts—after all, we learned to navigate romance through a screen. Though these two women want to be vulnerable with one another, there is always a little black mirror in the way—an escape from even constructive forces of embarrassment or social anxiety.

Every character in this movie has a cutting, sardonic wit and it’s not always clear what their intentions are. Is it a light-hearted read, meant to show love? Or a true verbal attack? The stakes aren’t quite as high in “Twitter discourse,” but when deadly weapons enter the mix, misplaced intentions become more serious. A two-faced character can be catty by day but murderous by night.

The combined effects of both alienation and uncertainty produce a tension that is gripping. Both the movie’s cinematography and audio design lend themselves to its claustrophobic atmosphere. The filmmakers provide just enough clues to keep the audience guessing, and the details are laid out masterfully. Hints that you thought were foreshadowing suddenly become disproven, and you will think and rethink your own theories just as much as the characters on screen.

Another prominent theme of “Bodies Bodies Bodies” is the prolonged identity crisis many young people find themselves in. Characters “play the victim” to stabilize their own self-image or public perception. People will simply repeat what they have heard before, without any deep thought or understanding. Buzzwords abound—”trigger,” “gaslight,” “narcissist,’ “toxic,” “PTSD,” “psychopath.” I wish I could call it an exaggeration, but we’ve all heard these words used completely out of context.

In trying to prove their innocence, most of these characters come off as vapid or ridiculous—and it isn’t always clear whether it’s an act. Fittingly, one of the first things we are asked to consider about these friends is whether they are as “nihilistic as they look on the Internet.” The story is as much of a “whodunnit” as it is a “who is she,” and it is in these existential themes that the depiction of Gen Z seems most realistic. We all struggle to understand ourselves and the world amidst a cultural upheaval, and our strange slang and behavior is just one symptom of the desire to “fit in.”

While technology is a prominent part of how these characters experience the world, the core of any story is people, and “Bodies Bodies Bodies” is no exception. The beginning, drive and conclusion of the movie all center on the relationship between two main characters—Bee and Sophie. Their drive to protect each other leads to most of the plot progression. But trust is difficult to restore, and the events of the film will place a wedge between these two women just as much as the doubts sowed by social media.

At the beginning of this movie, it isn’t totally clear whether these choices are intentionally satirical or just a misunderstanding of Generation Z. It is—by design—a thin line. But by the end of the film, the truth becomes clear. “Bodies Bodies Bodies” is a perfect balance of horror and comedy and an encapsulation of the soul of the social media age.

“The Sandman” Brings Us The Dream TV Adaptation