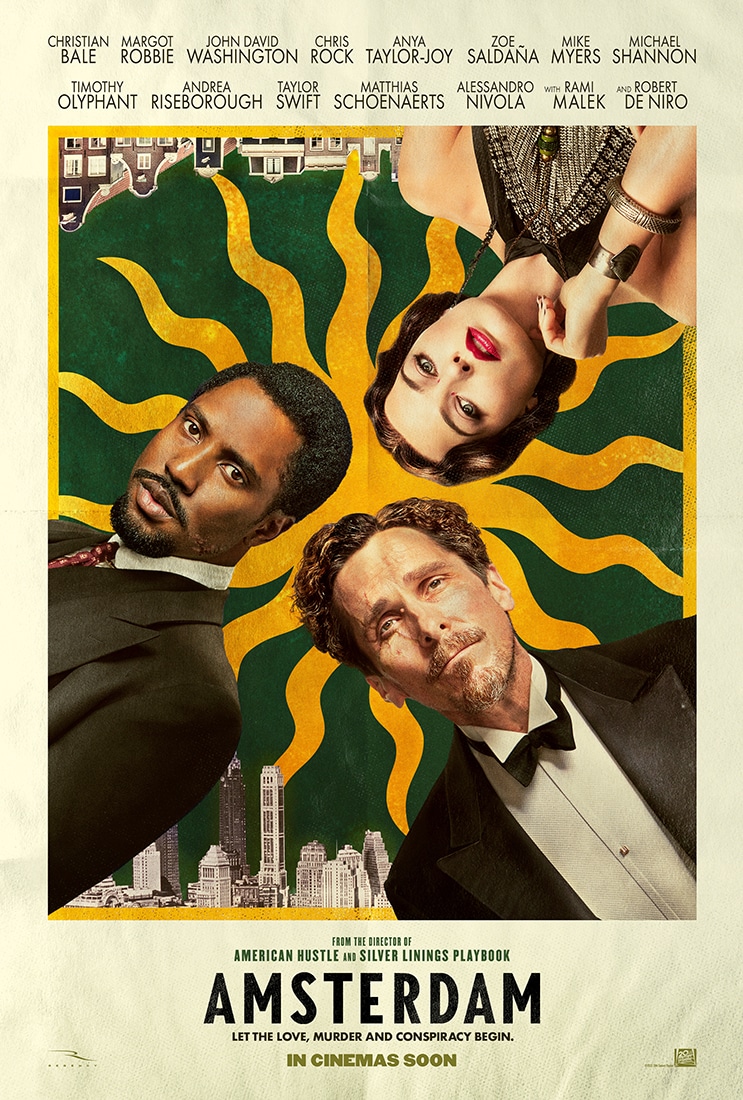 Helmed by an Oscar-nominated director and performed by star-studded actors, David O. Russell’s “Amsterdam” was built for success but instead flopped as a shallow imitation of films it draws inspiration from.

Loosely based on a true story about three friends who uncover a conspiracy to overthrow the government, the film boasts brilliant performances from an A-list cast led by Christian Bale, Margot Robbie and John David Washington and tries to craft a funny murder-mystery around its talented performers a la Rian Johnson’s 2019 hit “Knives Out.” However, the uninspired dialogue and poor pacing take what could’ve been an energetic crowd-pleaser and turn it into a forgettable mess.

The major draw of “Amsterdam” is undoubtedly the strong cast, as the aforementioned Bale, Robbie and Washington are joined by celebrities like Anya Taylor-Joy, Chris Rock and Taylor Swift in smaller roles. Bale commands the film as the offbeat Dr. Bert Berendsen, whose jokey attitude and wistful nature provide each of his scenes with enhanced life. But the standout performance of the film undoubtedly goes to Taylor-Joy as the snobbish socialite Libby Voze. Despite minimal screen time, Taylor-Joy steals every single scene she’s in, outperforming many of her more famous co-stars and proving her position as one of Hollywood’s fastest rising stars.

Unfortunately, a great cast can only take a film so far, and the bland dialogue results in a lifeless experience. The dialogue throughout “Amsterdam” attempts to replicate the screenplay writing conventions of the 1930s, the era in which the film is set, with heavy use of voice-over and dramatic character moments. However, modern film has largely moved past these conventions, making the majority of the writing feel outdated and cliché. On top of this, the film constantly breaks one of the most common rules of screenwriting: show, don’t tell. The most egregious example of this comes toward the end of the film. Instead of slowly revealing how the villain has been hiding under the heroes’ noses the whole time, one character just points at another character and essentially says “he did it.” This lazy ending exemplifies the plot structure and writing of the entire film, draining whatever energy it had left and leaving a serious lack of urgency or suspense.

This lack of urgency also has roots in the pacing of “Amsterdam,” as it meanders around its interesting premise, focusing most of the movie on unfunny, drawn-out conversations instead of plot. The film also refuses to stick to a linear narrative, jumping back and forth in time and even including imagined alternate timelines which exist entirely in some characters’ heads. While this structure works great for some films, it fails spectacularly here, confusing the audience beyond belief and preventing the film from building off its entertaining performances or premise. As soon as something interesting happens, the audience is whisked away to another time and place that they hardly care about. This lack of payoff permeates the entire film, all the way to its disappointing ending.

“Amsterdam” is not the worst movie of the year, as it does have a few redeeming qualities. Aside from the performances of the cast, the production is put together well technically, with vibrant colors and inspired costuming. But these positives are not nearly enough to overcome a weak screenplay, resulting in a movie that leaves the audience’s mind almost as soon as the credits roll. After a seven-year hiatus, David O. Russell has finally made his return to filmmaking with “Amsterdam,” but if this is the best he can do, a few more years off would have been better.