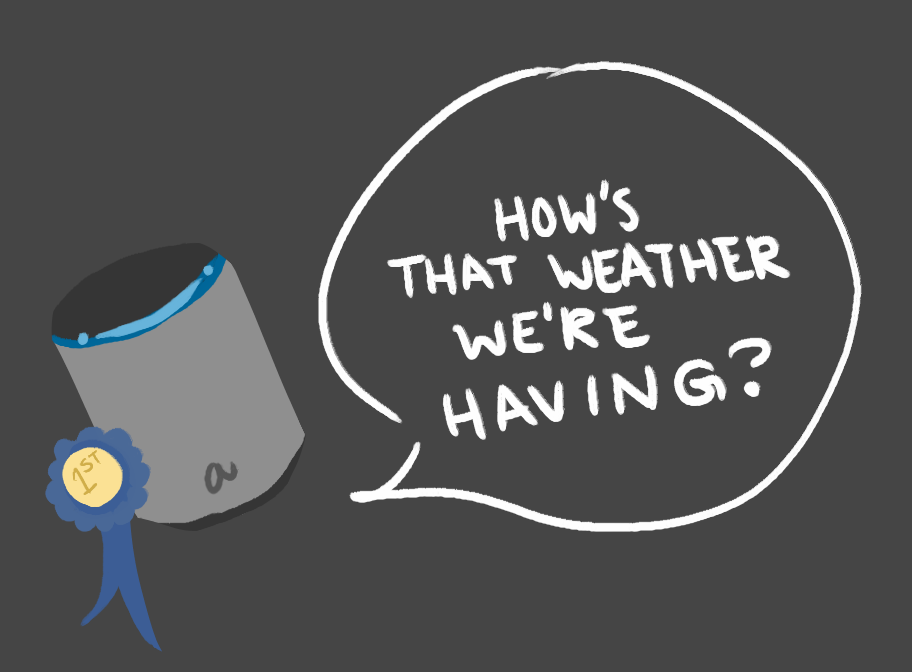 A UTD research team is a quarterfinalist in Amazon’s Alexa Prize Socialbot Grand Challenge 4 to teach the Alexa AI how to converse with humans.

After applying for the Challenge in September 2020, Kinjal Basu, a computer science doctoral student, and Gopal Gupta, a computer science professor, were granted $250,000 from Amazon and began gathering members to join their research team: Team CASPR. Kinjal Basu, Huaduo Wang, Sarat Varanasi, Fang Li, Nancy Dominguez and Xiangci Li are all members of the research team. They are competing against nine other universities from all around the world. The top three research teams that can teach Alexa how to engage in small talk for the longest time will win the Challenge.

“The acceptance rate for this competition was less than two percent, so we’re lucky to be given this opportunity,” Basu said.

The goal of the competition is to have Amazon’s Alexa engage in 20 minutes of conversation that incorporates aspects of human intelligence, such as the ability to make small talk about a range of topics. The cash prize for the winners is $500,000 for first place, $100,000 for second place and $50,000 for third place.

Team Emora from Emory University won first place in the Amazon Socialbot Challenge 3 by teaching Alexa how to engage in small talk for seven minutes and 30 seconds.

Basu said his team is working on creating a social bot feature that will allow Alexa to apply common sense knowledge and provide explanation and reasoning in its conversations. Additionally, they are working on teaching the AI how to form background assumptions, such as information from prior conversations, to better engage in human-like conversation.

“We strongly believe that to build truly intelligent systems that are as good as humans, we need to automate common sense reasoning,” Gupta said.

To accomplish this, the team is attempting to simulate the human thought process on a computer and apply it to the social bot by bringing in common sense knowledge from linguistic databases such as the s(ASP) system. This database directly converts text to informational knowledge and pulls additional background knowledge about concepts from sources like Wordnet and Verbnet. By doing this, the social bot will be able to comprehend the conversation and formulate a relevant response.

“People are trying to spend more time alone now and on their devices. Humans are becoming very device-centric, and we cannot solve this problem because of the advantages technology provides,” Basu said. “However, this is causing increases in loneliness, depression and different kind of anxieties.”

Team CASPR aims for the AI to decrease loneliness, recognize changes in conversation and use background assumptions to infer whether or not people are facing mental health challenges.

“By tracking data, the AI could potentially be programmed to recognize if a person is suicidal or if they’re going through anything. However, privacy is definitely an issue,” Basu said.

Alexa owners can directly participate in data collection and the testing process by saying ‘Alexa, let’s chat,’ and will be provided with one of the competing team’s social bots.

The competition consists of eleven phases through an eleven-month time span. Currently, the team is in Phase 8, the quarter-finals interaction period. Of the nine total teams selected for the competition, five had previously participated in the contest, meaning they had already familiarized themselves with the challenge. Basu said this required the research team to figure out a lot of new information since other teams already had prior experience.

“It’s quite challenging to represent the common sense knowledge that humans possess in a systematic way,” Gupta said. “We have been developing automated reasoning systems for this purpose for the last several years, and the challenge is to adapt this system for the competition.”