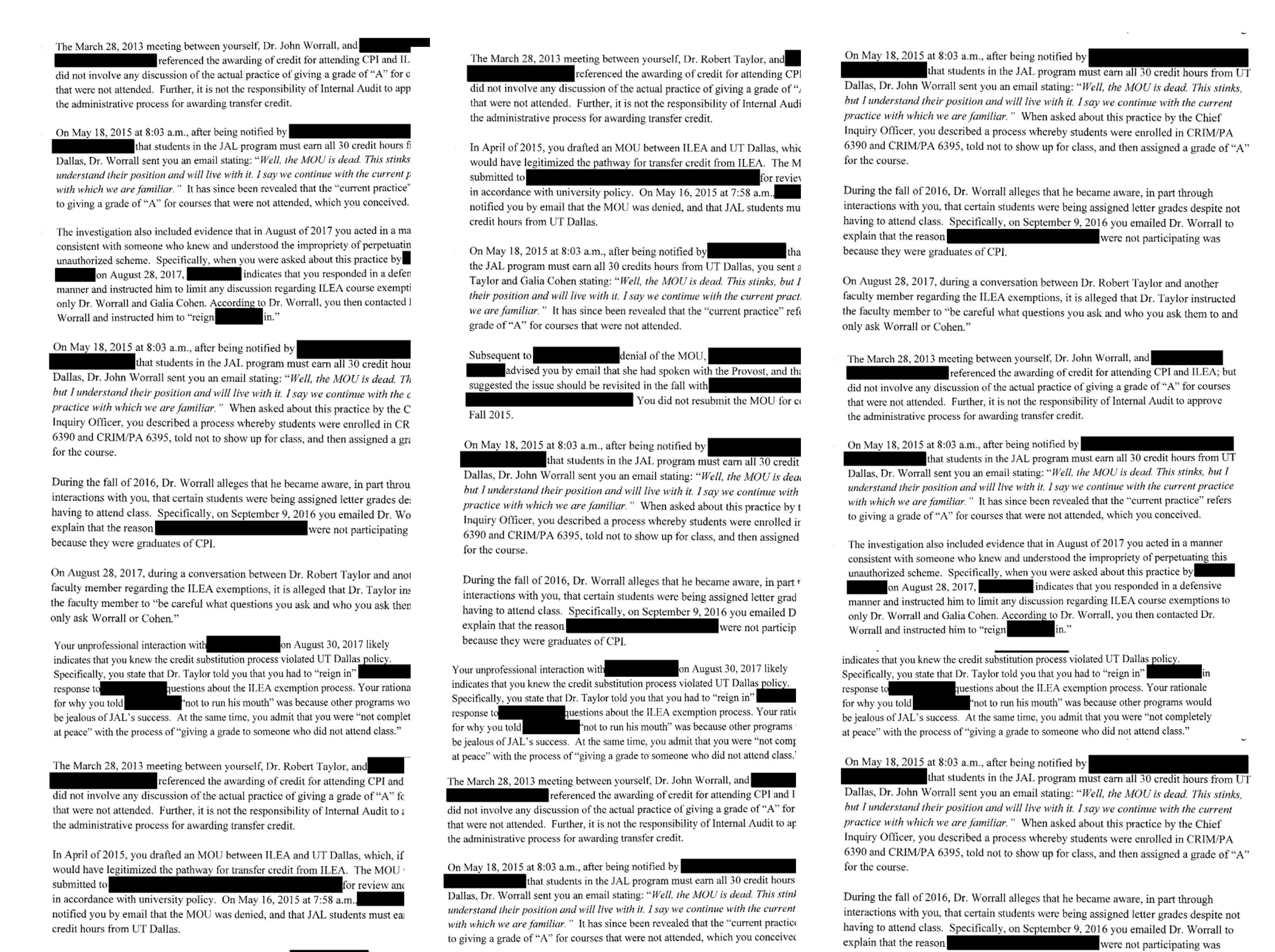 The recent controversy surrounding the Justice Administration and Leadership program came to light in a Feb. 3 report by The Dallas Morning News, in which transfer students in a criminology master’s program were awarded A’s for classes they did not attend.

However, The News took things a step further by publishing a scathing editorial the day after their investigative piece was released.

The editorial singled out UTD President Richard Benson and overgeneralized multiple aspects of the controversy. While Benson holds ultimate responsibility as university president, he is not fully to blame. The editorial fails to address the fact that these fraudulent practices took place well before Benson took office. But it also begs a bigger question: who made the mistake that is at the root of this scandal, and how can we fix it?

In its news report, The News cites an investigative report compiled by UT System in May 2018. The Mercury attempted to obtain a copy of this report in early January 2019 through an open records request, but was met with resistance on the basis of exemptions in the Texas Education Code. However, The Mercury did obtain a series of other documents detailing correspondence between the three professors at the center of the scandal — John Worrall, Robert Taylor and Galia Cohen — and university administrators.

The JAL program was established in 2012, according to a statement released by the university. The JAL website states the program prepares either current or future criminal justice professionals with a master’s degree in their field. The controversy focuses on transfer students from two local institutions, the Caruth Police Institute and the Institute for Law Enforcement Administration, some of whom received unauthorized credit for coursework that wasn’t completed at UTD.

According to documents obtained by The Mercury, JAL faculty at the time — criminology professors Worrall and Taylor — drafted a memorandum of understanding on Sept. 18, 2012 to establish a mechanism for transfer credit from CPI and ILEA. Officials from those institutions did not sign the MOU, which was rejected. Documents show that a similar request was re-submitted to the university administration in April 2015 and again denied. It is unclear — based on The Mercury’s documents alone — when the fraudulent grading scheme began. What is clear, however, is that Benson did not take office until 2016 — after both transfer credit requests took place and certainly well after the program even began. The investigation of the illegitimate grades began in December of 2017 and was completed by the beginning of May 2018. 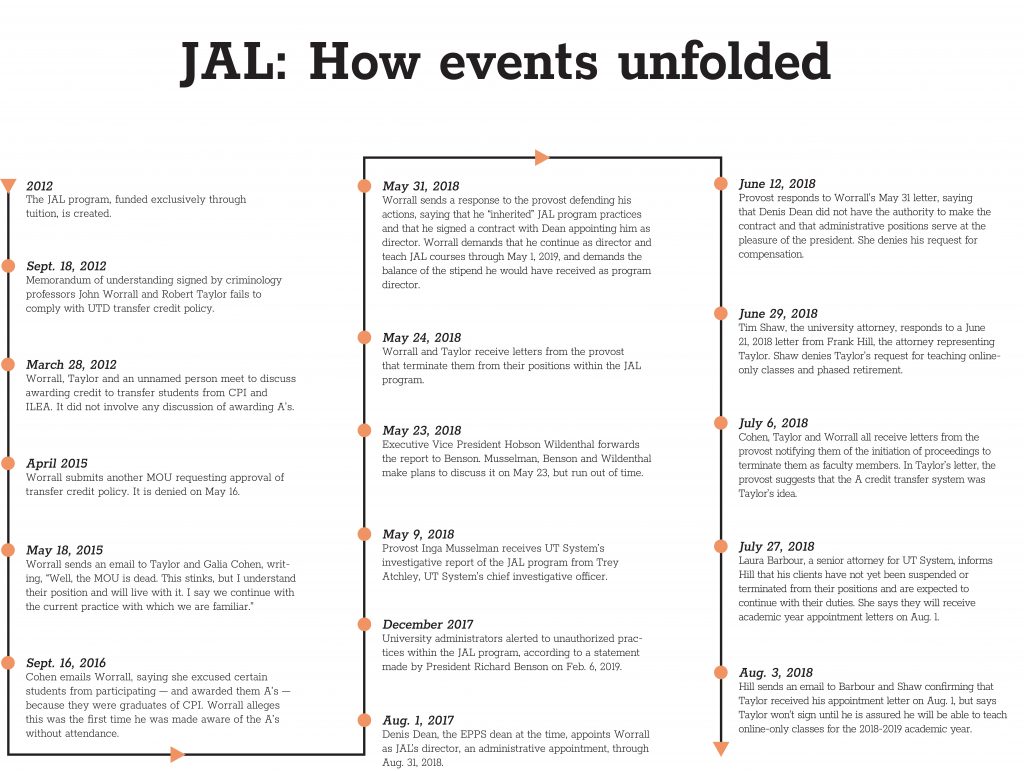 The key period of time that The Dallas Morning News‘ editorial glosses over is between 2015–2016, which marked a significant change in the university’s leadership. In June 2015 — after the April 2015 MOU request was submitted and denied — David Daniel stepped down from his post as UTD president, accepting a position in the UT System instead. Hobson Wildenthal was named interim president. Finally, in mid-July 2016, Wildenthal accepted the post of executive vice president and Benson assumed the position of president. Why is this important? Leadership at the top of the university was changing at the time when the problem reached its height. To suggest that Benson is singularly accountable would be misleading.

Going forward, two things need to happen to ensure this situation doesn’t happen again. First, there must be a better protocol for reporting incidents of this nature. Before an anonymous EPPS professor contacted the provost in 2017, they were forced to go to Worrall, their superior, who was involved with the JAL practices and told them to keep quiet. Resources for the entire campus community to report incidents is key. The Office of Institutional Equity and Compliance offers a confidential and non-retaliatory hotline (888-228-7707) to report cases of unethical behavior. The university community needs to be made more aware of the reporting mechanisms made available to them.

On a similar note, students need to be prepared — and have better means — to step forward. On the UTD Community Standards and Conduct website, there are forms available for faculty to report student academic dishonesty, but not the other way around. In the case of the JAL program, it was faculty members who were dishonest.

The JAL scandal is a dark chapter in our university’s history, but it demonstrates the need for a more transparent and accessible reporting process for faculty, staff and students. As future criminal justice officials, scientists, doctors, engineers and humanitarians, having integrity isn’t optional — it’s mandatory. The value of our degrees depends on it.

We can’t confirm the final findings of the UT System investigation based on The Mercury’s documents alone. What’s clear is what didn’t happen. Cohen, Taylor and Worrall are all still employed by the university and are teaching classes this semester. In the case of Taylor, he is teaching only online courses this spring, as he initially demanded in a June 21, 2018 letter from his attorney to the provost.

All three professors received letters from the provost on July 6, 2018, notifying them that proceedings had begun to terminate them from their faculty positions. All three letters said allegations had been raised that they “commissioned and committed what amounts to academic fraud.” A July 27, 2018 email from Laura Barbour, a senior attorney from UT System, to Frank Hill, the attorney representing Taylor and Worrall, said the professors would receive academic appointment letters for the upcoming school year, though the disciplinary process would continue. Nearly seven months later — and nine months after the release of the extensive UT System report — why are all three professors still teaching at UTD?

A syllabus written by Taylor for one of his spring 2019 classes says, “Since (academic) dishonesty harms the individual, all students and the integrity of the University, policies on scholastic dishonesty will be strictly enforced.”

Shouldn’t that be the case for faculty members, as well? 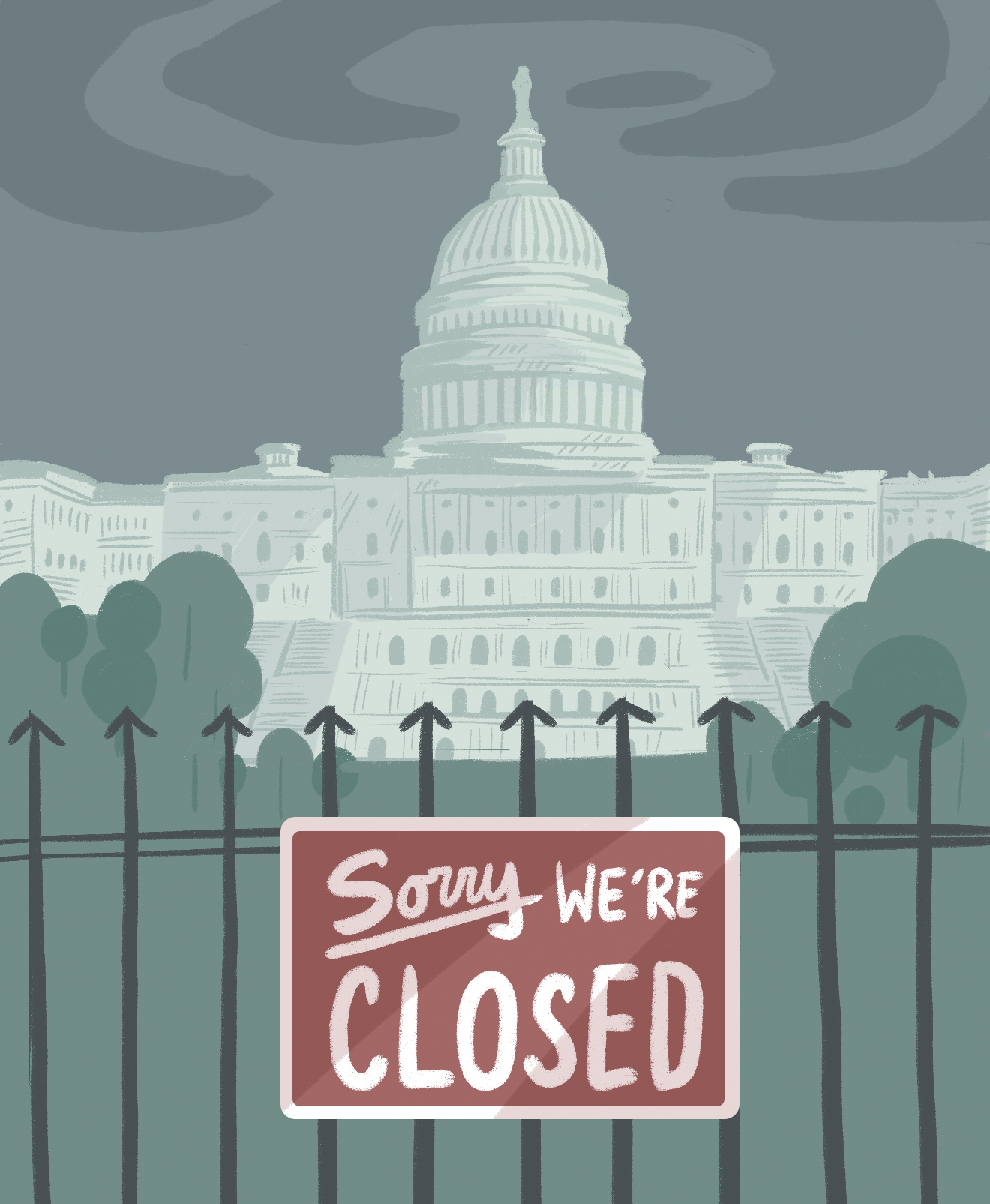 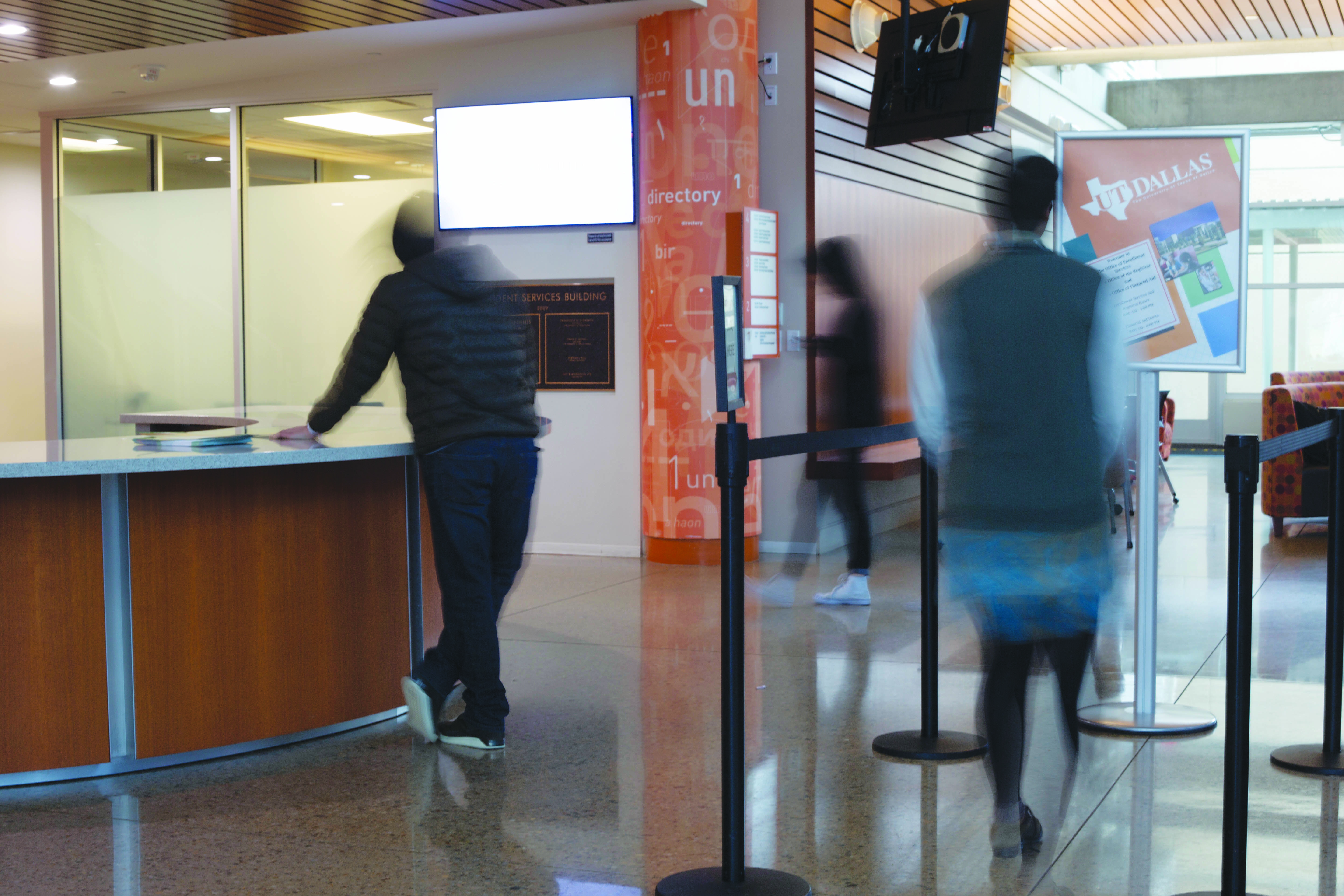