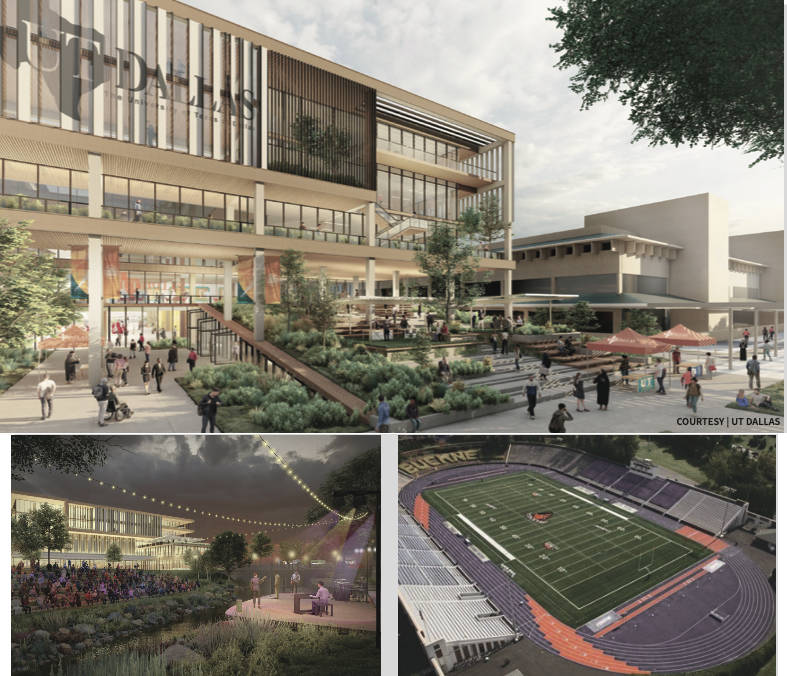 Above is a rendering of what the exterior of a new Student Union could look like. The new Union would be located where Green Center is currently, and would be large enough to support 35,000 students. Below on the left is a concept of an outdoor amphitheater in the Union for live performances from student groups. Below on the left is how a track and field complex open for both athletes and the public alike could look. Photos courtesy of the City of Dallas.

Students will have the opportunity to vote for two referendums to support a new SU building and expand the athletics department from Oct. 4-6.

The referendums propose raising the Student Fee from $60 to $100 per semester, and the Intramural and Intercollegiate Athletics Fee from $45 per semester to $7 per semester credit hour. Vice President of Student Affairs Gene Fitch said the raised Union fee would primarily go towards a new SU complex which would be large enough to support 35,000 students, and the athletics fee would go towards a multitude of department enhancements including building a new track and field complex open for athletes and the public alike, expanding coach and staff offices, and adding a strength and conditioning facility.

If passed, the fee would go into effect in fall 2023, and the University would begin breaking ground on the new SU and track complex as soon as possible, which Fitch said is likely summer 2024. In terms of financial aid, the fees would be considered a school cost, and it wouldn’t affect students on the guaranteed tuition plan.

The referendums come at a critical time in student growth. The University is expecting to enroll nearly 32,000 students this fall and expects to exceed 35,000 students in the next three to five years, making the school one of the fastest growing in all of Texas. The Association of College Unions (ACU-I) recommends university unions allocate 10 sq ft of space to each student, meaning UTD’s current 100,000 sq ft building is too small. To put it further into perspective, enrollment has increased by 153% since the last time the Union fee was raised in 2001, and the athletics fee hasn’t been raised since its conception in 2008.

“There’s never a good time to come to students and ask them to support a fee increase, but if there were, this is probably that time,” Fitch said. “Once this happens, you’re looking at three to potentially four years before a building is up and operational. So, the longer we wait, the more space constrained we become, and we’re not getting any smaller. We have 400 student organizations, all of which need space, and we’re all fighting for the approximately eight meeting spaces we have now, including the Galaxy Rooms.”

Among new amenities and spaces in the new SU master plan, are updated food and dining options, more recreational tabletop gaming spaces, lounge and study spaces both for recreational use and club meetings, an art gallery, performance areas for dance and spirit groups, a banquet space that could hold up to 600 students, improved Student Government and Graduate Student Assembly parliamentary quarters and an outdoor amphitheater for live entertainment. Fitch said it’s likely the new facility would be built where Green Center is now, while all classes and the Honors college would be moved to the Student Success Center.

While priority would go to creating this new SU, Fitch said the Union fee might also help enhance parts of the current Union. The fee could help maintain the upcoming gaming lounge renovation and would provide Student Media and FSL with larger spaces for operation.

For the athletics fee, priority would go to building a new track and field complex for athletic and recreational use where Lot J is. To accommodate for the lost parking space, the University will build a new parking garage – but until that’s finished, students will be redirected to park in Lot U and PS4. The athletics fee would also help expand coach and staff offices, renovate the current baseball and softball stadiums, and support a new strength and conditioning facility.

Fitch said it’s important to note though, that these enhancements wouldn’t start immediately after the University collects votes the student vote is part one of a twostep fee passage process. If the majority of students voting support the fee increase, the University will go to the Texas state legislature to propose changing the semester athletics fee to a credit hour fee and raising the 60$ Union fee cap to 150$. This doesn’t mean the University could immediately charge students 150$, though. Fitch said they’d start with their voted upon 100$ change increases past that would be incremental and would span over years; anything more than a 10% increase will warrant another trip to the state legislature for approval.

“Think back to 14 or 20 years ago,” Fitch said. “If the students then hadn’t looked to the future and understood what UTD could be, we wouldn’t have the SSB, the SSA, the current Student Union, or our Athletics facilities. None of those would’ve existed if students didn’t look to the future and have a vision of what UTD could be. We are in that same place now –we’ve got to look to our future. And that’s not to say that you can’t come back and enjoy these facilities when you’re an alumni or a parent of a future student. These spaces will still be available and a welcoming to you.”

Students will get to vote for or against the referendum through an online ballot that the University will email out on October 4. Until then, Comets can learn more about the referendum by visiting the Student Affairs website and attending open forums hosted by Fitch, Athletics Director Angela Marin, and Student Union Director Dan Goodwin, on Sep. 9 from 2:30 – 3:30 pm, Sep. 15 from 2–3pm, Sep.2 from 3–4pm, and Sep.28 from 2–3pm in the SSA Auditorium.