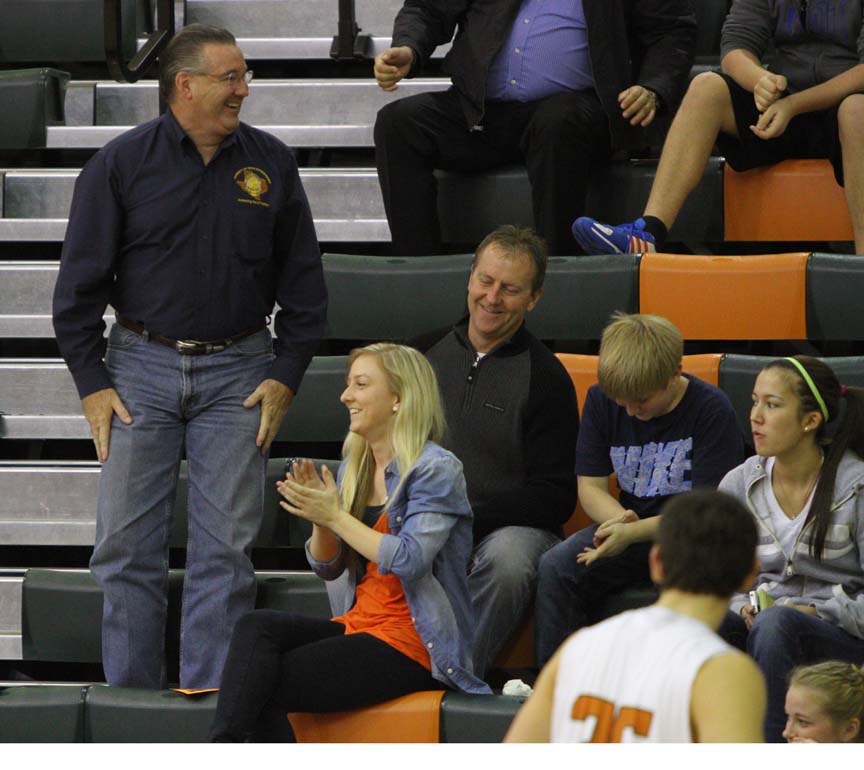 Yang Xi | Mercury Staff (Above and left) Larry Zacharias took over as chief of police in 2009, and immediately made it his goal to increase UTDPD’s visibility on campus in a social aspect. He frequently attends basketball game and judges various student contests.
Archives

Not who you’d expect

For being chief of police, Larry Zacharias is friendlier than some would imagine.

Well aware of this, Zacharias took charge of setting an open and accessible tone for the police department when he took over in 2009. As chief, he is in charge of operational, fiscal and policy oversights as well as hiring, firing and promoting police officers.

“You don’t want grumpy, old, mean cops interfacing with you,” he said. “You want cops that are pleasant and capable.”

While Zacharias takes his job seriously in protecting the campus, he doesn’t stop at just law enforcement. He often frequents UTD basketball games as well as a few other sports.

“When I started here as chief I wanted to become involved in the campus,” he said. “I wanted the campus to know that I was accessible and that I support their activities. I’m not here just to do law enforcement, I’m here to be a part of the university.”

Besides cheering behind the bench and judging the narrow-waist-and-broad-shouldered beauties, Zacharias is here to make sure students have a safe place to study, work and play.

“The biggest difference is how you interact with people,” he said. “As you police people you see almost every day, when you make a traffic stop, there is a high probability you’ll see that person again. When you stop someone for a traffic violation in a municipality like Richardson, you may never see that person again in your career.”

Since UTD is not often quoted as being a party school, the police department spends a majority of its time patrolling the campus responding to theft reports and apartment disturbances. Even during holiday breaks, the police are out and about making themselves visible and available.

Born in Lubbock, Zacharias moved to Dallas when he was 10. After spending a semester at the University of Texas at Arlington, he moved out to Huntsville to attend Sam Houston State University where he completed his bachelor’s in criminal justice and his graduate degree in police administration. After he married in 1976, he moved his family to Richardson where he began his career as a police officer at the age of 25.

During his time in Richardson, Zacharias gained experience in just about every division of law enforcement.  He has worked as a detective of crimes against property, in narcotics and as a commander of the SWAT unit. He was appointed to captain in 1986, assistant chief in 1995 and finally chief in 2002 until he retired in 2008.

Zacharias said it was just a lucky serious of events that led to his career choice. After coming in contact with pleasant officers growing up and communicating so well with people, Zacharias couldn’t see himself doing anything else.

“A lot of kids think about being a police officer or firefighter when they’re young, but it goes away as they grow and develop different interests – well it never went away for me.”

Working in so many aspects of police work, and enjoying it, proves that Zacharias chose the right profession the first time around.

“Policing is almost like a calling,” he said. “I never wanted to be a police officer so I could drive cars fast and carry a gun. There were other things about the profession that said this is what I ought to do, and I always felt that I could do it well.”