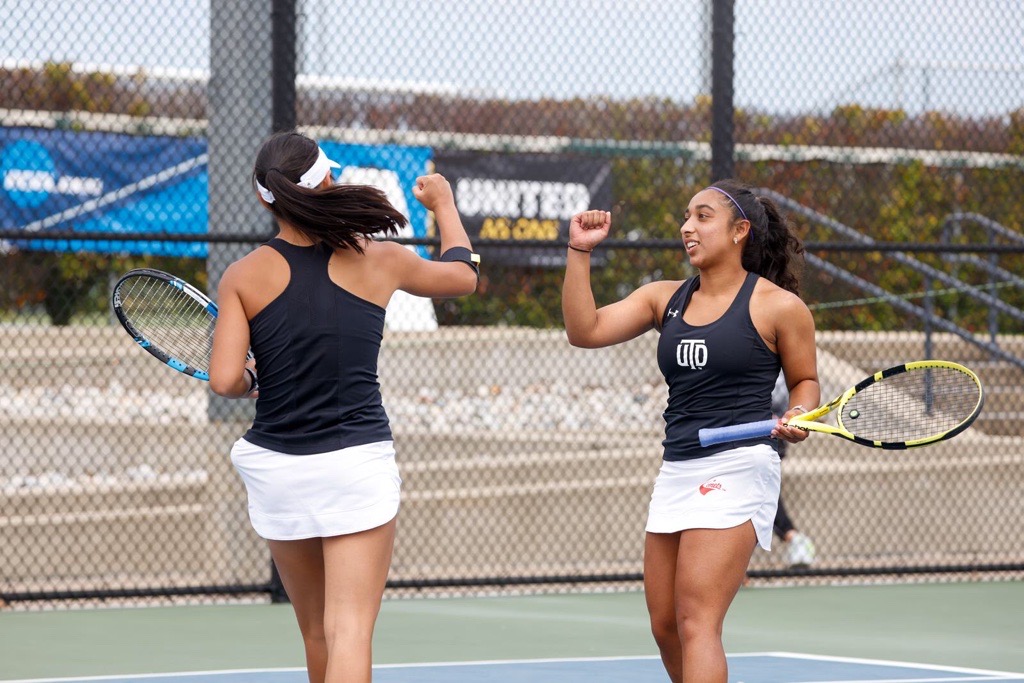 Women’s tennis players Samantha Wong and Kathy Joseph made UTD sports history by ending their 2021 season with a semifinals finish at the NCAA doubles championship.

The pair was one of just 16 chosen to play in the national competition and the second duo ever sent by UTD. According to a UTD sports article, Joseph and former teammate Sindhu Ravula made the 2019 doubles tournament, losing in the first round.

Wong said that the pair likely would not have qualified without key wins in a few regular-season matches that allowed them to keep their ranking. Normally, the top four doubles pairs in each region qualify for the tournament, but because of COVID, only the top two were selected this year.

“We were both fortunate enough to be playing really well, and we were such great doubles partners,” Wong said.

After a tough first match that was interrupted and forced onto an indoor court by rain, the duo hit their stride with the second match, Wong said. She was nervous for the semifinal match against a pair from Emory – the school that had just won the team championship.

“I just had the mindset to play my game and just do our best, and it’s a little frustrating honestly that we didn’t pull through, because. . .I felt like [we] had our chances,” Wong said.

Head coach Bryan Whitt said that he didn’t know until fairly late in the season that Wong and Joseph had a chance to make the tournament. With limited match opportunities due to COVID, the regional rankings were hard to predict. However, from a skill level standpoint, the pair’s ability to make the tournament was no surprise.

“You could be a very good singles player, and it may not necessarily translate directly to the doubles game because there’s different skills needed. But fortunately, both Kathy and Samantha are very comfortable in that,” Whitt said.

Joseph and Wong’s run was the furthest ever by a UTD student-athlete in any NCAA sport, Whitt said. While it’s difficult to compare the results of an individual tournament to that of a team sport like soccer or basketball, their success increases the appeal of the tennis program.

“That kind of puts in context how well they did do,” Whitt said. “If a high school student thinks they want to go to a Division III school, and then they see that we’re competing at that level, that certainly adds to the marketability.”

Joseph was also selected to compete in the singles tournament, in which she advanced to the semifinals. She could not be reached for comment.