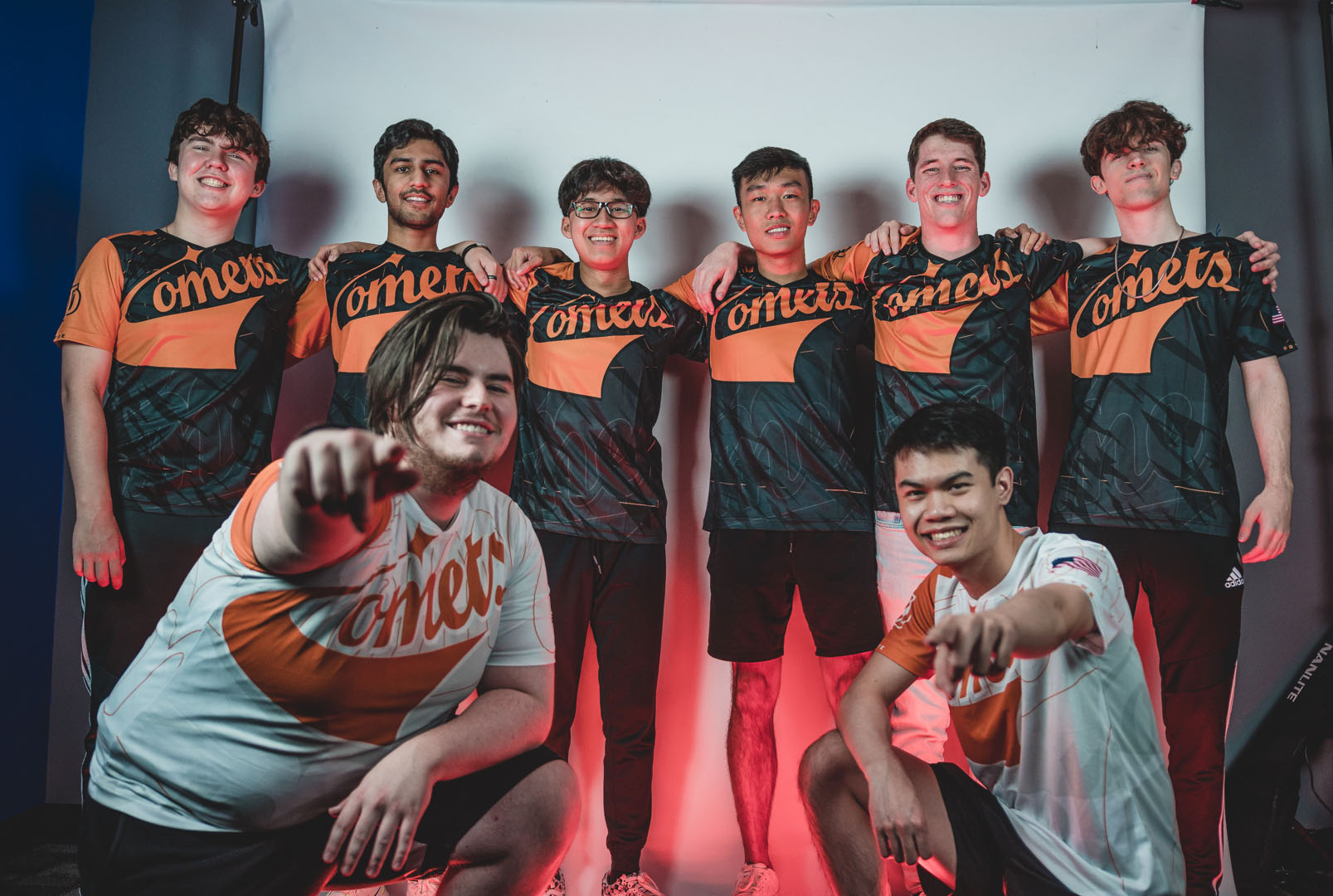 The VALORANT team was assembled this semester with six players, one sub, one student coach and a student team manager. Photo courtesy of UTD eSports.

UTD’s new VALORANT team is preparing to take the fight to LAN before the start of the official season.

VALORANT is a tactical team first person shooter released by Riot Games, which are mainly known for League of Legends. The game involves two teams of six fighting for control of territory with a combination of abilities and gunfights. Because of Riot’s previous support for collegiate leagues, UTD decided to support a full team for the game ahead of the start of the official collegiate VALORANT league, known as CVAL, in November. Before the start of CVAL, the team has participated in third party tournaments such as the weekly NECC league and the Red Bull Campus Clutch. Their current record in NECC is 2-1. Esports Director Drew Boehm said that the team is working on building team cohesion in preparation for a Red Bull LAN event at the end of October.

“It’s always kind of a rocky start in terms of team cohesion,” Boehm said. “None of them have really played together. Maybe two of them on and off, but they’re basically all new together which is gonna be natural, especially with a brand new team. But it’s nice the fact that they all get along really well.”

Boehm said that the tryout process was lengthy, with over 100 potential students. Candidates were whittled down by their rank and role, and then the top 20 players were given full tryout sessions. The team ended up with players with a wide range of experience, including rookie computer engineering freshman Andrew “WinDoge” Hill, computer science junior Justin Jung and long-time player and psychology senior Brian “BrianH” Honea. Honea currently plays the duelist role on the team, which focuses on killing other players to gain advantages. Honea said that one of the team’s strengths was their varied experience with the nascent VALORANT pro scene.

“We have a lot of good experience with some of our core members,” Honea said. “So it helps with team learning and team growing. As well, our coaching staff GRAVE played pro when the beta first came out. So he had his fair share of experience in team structure, so he knows a lot about how team structures should go and practices and all that.”

Team manager and software engineering junior Joe “GRAVE” Linden said that at the collegiate level, the biggest issue with most teams is inconsistency in play. VALORANT is a fast-paced game with teams clashing on a round to round basis, so snap decisions are key to success. Linden said that the UTD faces a serious challenge against some of the better teams in the league.
“It’s very hard to grind out rounds in college versus really good teams,” Linden said. “They can do so much crazy stuff that you aren’t necessarily prepared for. You can only do so much with a default [strategy] and trying your best to just play safe and get kills if they’re trying to do something crazy.”

Jung and Saurav “Saurav” Chaudhary serve as the team’s IGL players, meaning they make snap decisions needed to coordinate the team. Jung said that the team was working on being adaptable and more responsive to their opponents’ actions.

“Our weakness is understanding how rotations and how other people will play,” Jung said. “We jump the gun sometimes too much, so if we just slow down and take our time, then it’ll be better.”

The team begins its CVAL season on Oct. 21 and faces off against UST, UT and Blinn at the Arlington Esports Stadium on Oct. 29. The Arlington event will be the team’s final qualifier for the international Red Bull event. Heading into these challenges, Honea said that he’s confident in the team’s future.

VALORANT team fails to clutch out on LAN