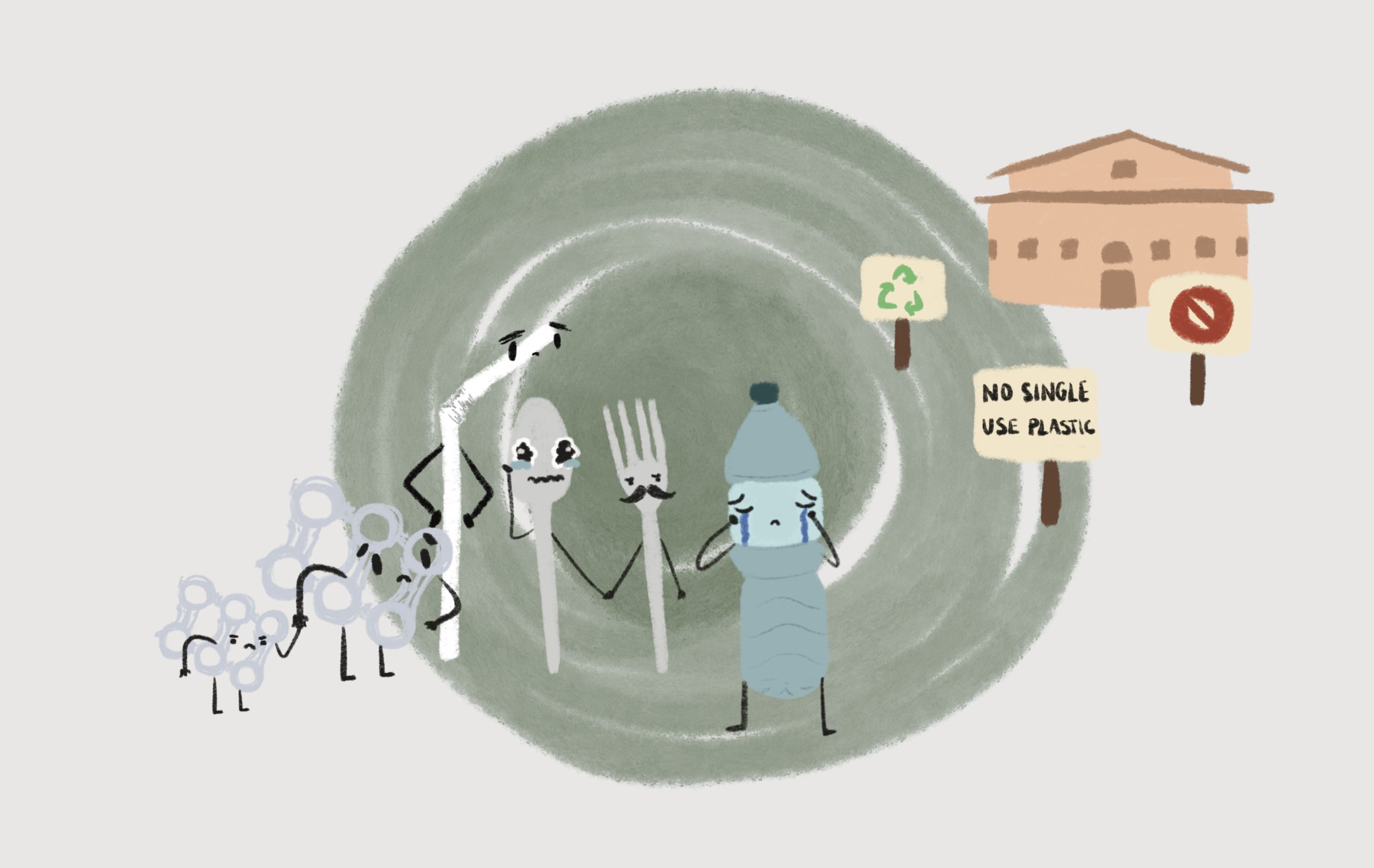 The proposal passed on Jan. 19 with support from the Sustainability Committee, Student Government, the Graduate Student Assembly and over 1,137 students who signed a plastic ban petition. It’s now en route to Auxiliary Services and then President Benson, and, if approved, would be the first of its kind in the UT System and across Texas.

“This Ban goes with the current process of UTD becoming more and more of a sustainability-centered university,” Sustainability Committee Head Dorothee Honhon said. “While we’re currently ranked Gold by [the Association for the Advancement of Sustainability in Higher Education], we still have one level above us – we can still do better. This is that next step.”

The idea began in March 2020, spurred on by an ECO UTD petition and the general interest of the Sustainability Committee to take action against campus waste, as UTD produced over 2.9 million pounds of waste in 2019. Geospatial information sciences junior and former Eco-Rep Paulina Hruskoci spearheaded the project, working with the Post-Landfill Action Network – a national organization leading plastic bans at universities such as UCLA and UC Berkeley. UTD’s ban is structured around PLAN guidance, and targets primarily dining and auxiliary use plastics – the current iteration of the proposal doesn’t address laboratory and medical implements. The gradual ban would have four main stages: developing a Plastic-Free Task Force to execute the proposal, eliminating non-essential, noncompostable single-use disposable plastics, creating policy to keep that plastic elimination permanent and implementing reusable substitutes.

“Only 9% of plastics that are disposed of in the United States every year are actually recycled. We all have this kind of belief that if we recycle our plastic bottles and recycle our plastic food containers, then we’re not going to be harming the environment, when in fact, many of those plastics end up in the ocean, landfills and causing environmental harm,” Hruskoci said. “So, I really wanted to take action on something to actually make our actions on a daily basis matter.”

A notable concern with completely banning plastics in straws and bags is that it may cause disparities for disabled students. To address this, Hruskoci said the Office of Sustainability has been working with the Office of Accessibility to figure out how to best make plastic alternatives accessible, as well as account for disparities in the long-term.

“In terms of cost and implementation concerns, we see this as kind of a long-term plan for the university,” she said. “We don’t expect us to be like, ‘no, we’re not having any plastics the second the next school year starts.’ We want this to be a long-term thing where we phase out one thing [at a time] … and we’re working that into our budget every year, our strategic planning every year, and it’s really actionable and realistic for the entire university.”

The Plastic-Free Task Force will be allowed flexibility to develop and implement the Plastic Ban plan, including figuring out what reusable alternatives the University can realistically use to replace dining and auxiliary products. The Sustainability Committee, Student Government and University admin will identify and assign students, faculty, staff and relevant or interested stakeholders– such as Dining and Auxiliary Services – onto the Task Force. Students interested in getting involved can contact Hruskoci at her email, Paulina.Hruskoci@UTDallas.edu, or message Sustainability Committee leadership at @Eco_Reps on Instagram.

“In my perfect world, I envision on a daily basis students, faculty and staff not really encountering plastic waste,” Hruskoci said. “I envision a world where you go to the Dining Hall and you’re using a reusable container. When you leave the dining hall, you’re able to use that reusable container, bring that back to your dorm and return it at a later date. And I think that in terms of everyday life at the University, we’ll see a lot more reusables, [and] maybe single-use compostables…culturally, I think it’s a huge step for students to be thinking about plastic waste, thinking about their waste footprint and maybe bringing that same idea home to their lives outside of the University.”

UTD Rooms returns for student use