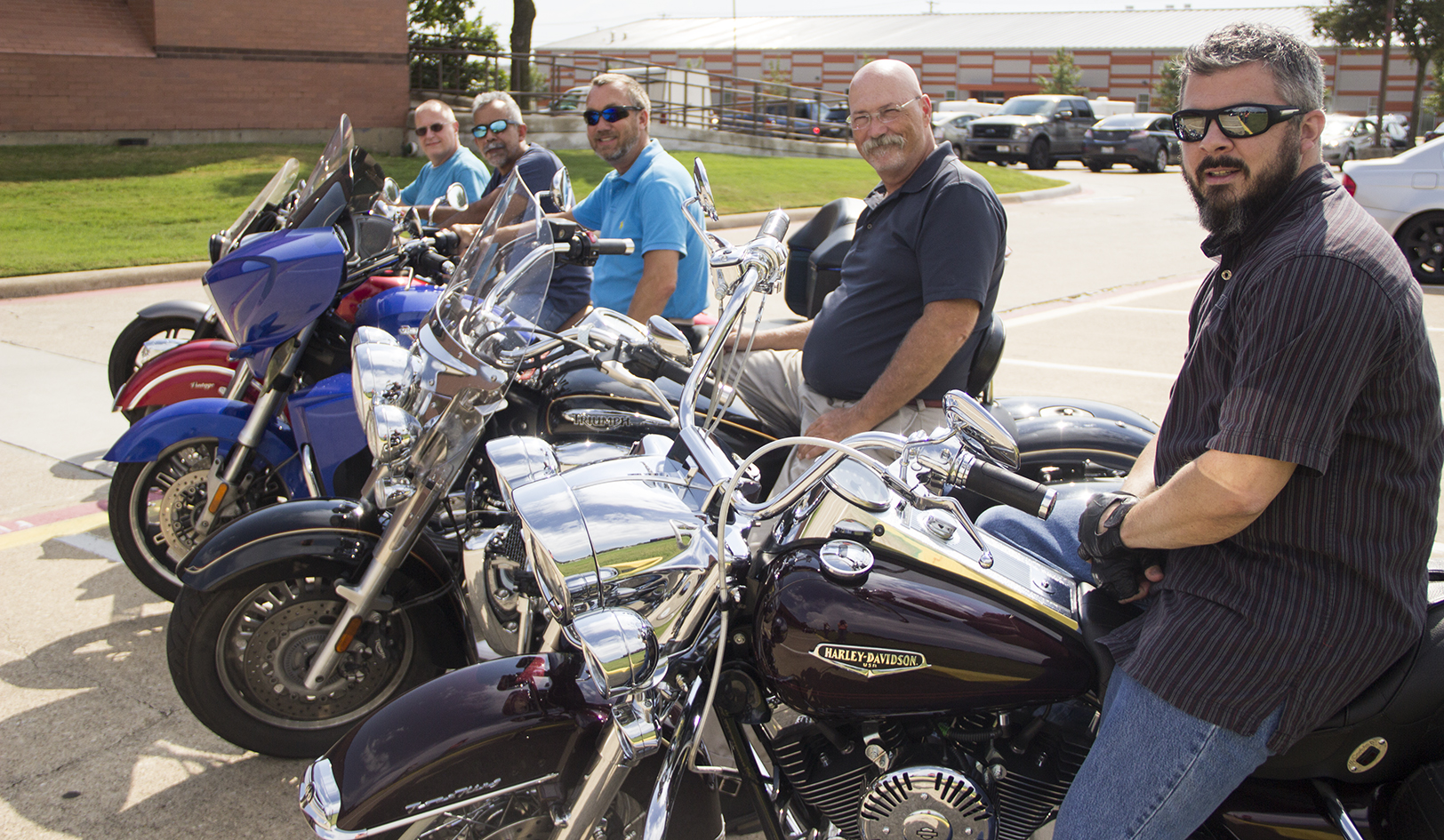 Systems Analyst Scott Steffan (third from left) and IT Manager Richard Marler (second from right) competed in the 2016 Corporate Challenge: the Great Ride motorcycle ride — an event that is almost 90 miles — with other members from UTD. Photo by Ruth Varghese | Mercury Staff.
Campus News
News

UTD faculty Scott Steffen and Richard Marler took part in this year’s Corporate Challenge: the Great Ride to raise money for the Special Olympics of Texas. With the company of hundreds of other bikers, including UTD students, Steffen and Marler rode their motorcycles to support the cause.

The Corporate Challenge is an Olympic style series of charity events held every year from late August through early October. One of these events includes the Great Ride, where a group of people travel a pre-determined route on their motorcycles. Like the 22 other events, the Great Ride raises money for the Special Olympics of Texas.

IT Manager Marler and his wife attended the charity event for the second time on Sept. 3.

“My wife and I rode last year,” Marler said. “I’ve been (at the Research and Operations Center) since 2002 so the Corporate Challenge has been going on for some years. There was always talk of joining it and participating. I’m not really much of an athlete so I figured, ‘Hey, I can ride a motorcycle.’”

Although he has not participated in all of the Corporate Challenge events, this is not Office of Information Technology Systems Analyst Steffen’s first time joining in the Great Ride. Steffen also took part in the kick-off walk.

“Every year on Friday evening at the start of (the event) they have a walk,” Steffen said. “It’s another participation event where they give you a marble at the beginning of the walk and at the half mile mark you drop it into whatever bucket your team is, so you drop it in the UTD bucket and you walk back. So if you wanted to you could go and get another marble and do it again.”

Not only does Corporate Challenge have a kick-off event, but there are many other activities besides the Great Ride. From table tennis and volleyball to corn hole and horseshoes, the Corporate Challenge has events for people of all ages and preferences, and all the events are spread out over the course of three weeks.

“I participated in the running event in the past and kept in the running team,” Steffen said. “A few years ago, they started the Great Ride and somehow I heard about it. I wasn’t able to ride because my bike was getting repaired, but (Marler) rode that year.”

Although Steffen enjoys riding his motorcycle, he said that the cause of the event is equally important.

“For me I think it’s a good charity event,” Steffen said. “It’s a good excuse to get together and go on a ride and hang out with a bunch of like-minded people. It’s over roads that we are way too familiar with so it’s not something new to us. We are very supportive of the cause.”

Richardson Sponsorship Director for the Corporate Challenge Donna Leach said that the event was originally started in 1997 to raise money for the Special Olympics, and the Great Ride portion started eight years ago.

“Ultimately all of the funds and the proceeds go to Special Olympics,” Leach said. “(We) charge the vendors, and that also goes to Special Olympics. Last year we donated about $5,300 out of this one event and around $1.8 million over the years.”

Although the event is low scale, Leach said there are many sponsors including Blue Cross Blue Shield, State Farm and even UTD.

The cost to participate is $20 per motorcycle and an extra $10 per passenger.

“In the first year we had 100 motorcycles and it was only a 30 mile long ride from the Civic Center to Eastside on 75 and Campbell,” Leach said. “Each year it has grown.”

The race has since almost tripled in distance.

Interdisciplinary studies junior Michael Kessinger said that this is the first year he will be participating in the race, and that he is most looking forward to sharing the experience with his wife. Kessinger also said he grew up around motorcycles and recently bought two Harley’s, so when he heard about the Great Ride through the UTD News Center, he had to sign up for the cause.

“It’s going to be an interesting ride,” Kessinger said. “I’m looking forward to new areas like back roads to ride with my wife who is also participating. We are fairly new to motorcycles and it’s going to be our first ride together.”

Steffen said that he is most looking forward to the race alongside his co-workers and friends, and that it is a good way to share comradery while supporting a good cause.

“This is the first year we all have gone as a group,” Steffen said. “I think it’s cool because (Marler) and I ride together a lot. The other guys in the group ride together some, so it will be the first time we’ve all hung out on the road together.” 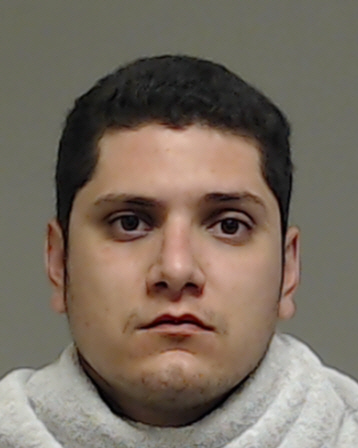 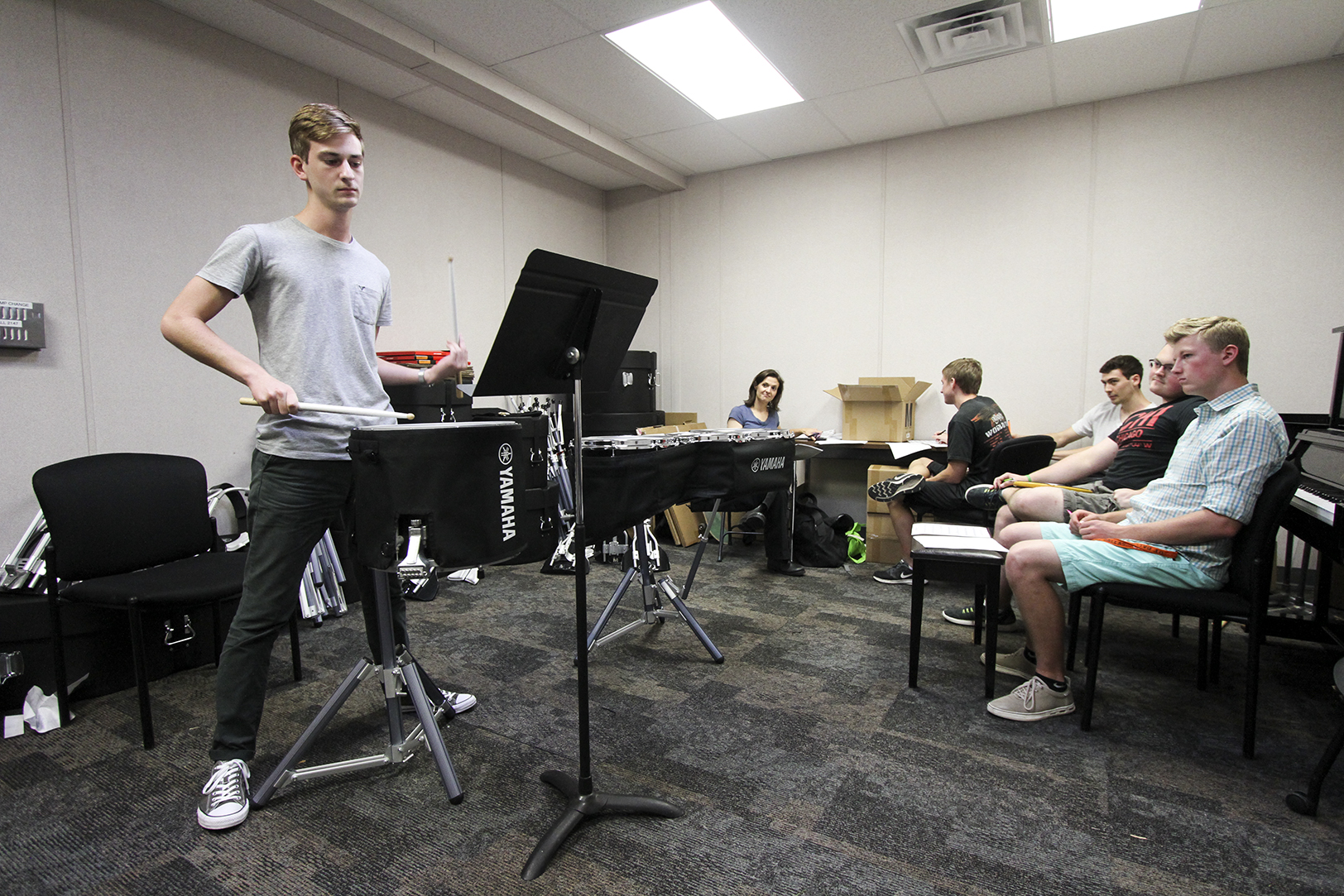