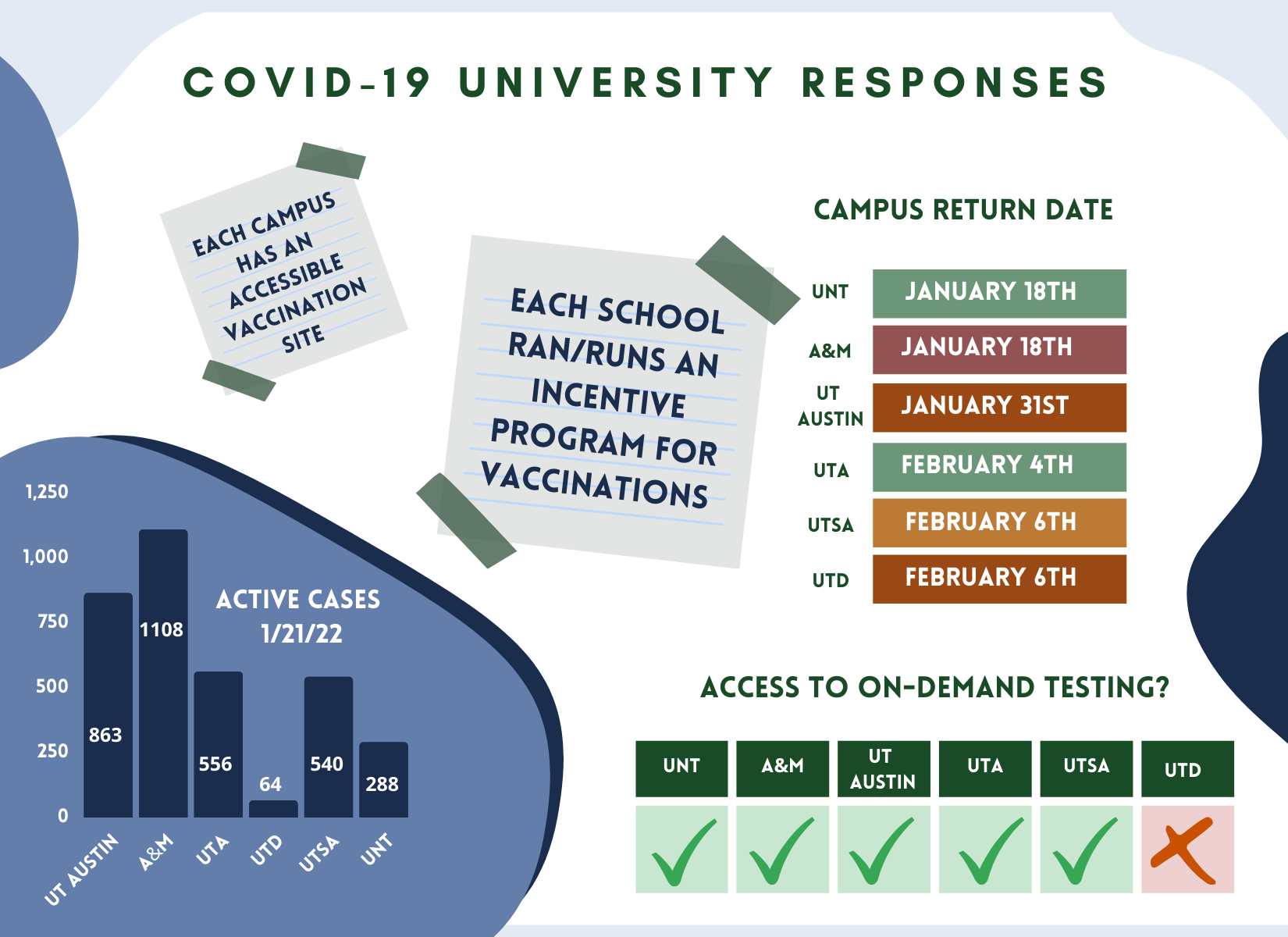 Universities across Texas responded to the omicron surge and the pandemic with varying measures. How well have they succeeded?

Looking at UT, UTSA, UTA, TAMU and UNT in comparison to UTD, most Texan universities have taken similar steps to UTD in combatting the COVID-19 pandemic. Daily health checks, proactive testing and constant mask and vaccine encouragement are a common theme across all of these schools. However, there are some differences in approach, especially regarding the beginning of the spring semester.

The biggest difference between campus responses is in the in-person spring semester start date. Most campuses opted to use virtual instruction to delay the start of in-person operations for two to three weeks, with the exception of TAMU and UNT. The UT system collectively delayed in-person instruction, with UT set to return Jan. 31 while the rest of the system declared they would be online through Feb. 4. However, there doesn’t appear to be a strong link between in-person instruction and reported case numbers; for instance, UNT – already a week into in-person instruction – reported 117 cases at time of reporting, while UTA has reported 723 active cases without yet teaching classes in person.

Of the six universities compared above, UTD has the lowest amount of reported active cases: 73. However, UTD is also the only university in the UT System without on-campus testing either by demand or by appointment, which may be deflating that statistic.

Vice President and Chief of Staff Dr. Rafael Martín said that will likely remain the case throughout the course of the semester, as UTD doesn’t have access to the same in-house medical infrastructure as other large universities.

“Realistically speaking, we don’t have the bandwidth to provide the walk-in, on-demand testing. Most of the institutions that I’ve seen that are providing that sort of service have health science centers associated with them. Many of them have nursing schools or even medical schools, and they’re leaning heavily on that infrastructure. That makes a lot of sense,” Martín said. “We obviously don’t have that. When we were doing asymptomatic testing, we had the capacity to do up to three or 4,000 tests a week. That’s maximum capacity, and clearly that’s not going to get you through 30 to 35,000 people – employees and students – on any kind of regular basis.”

Another difference in approach across universities has been the vaccine incentive programs offered by the schools. UTD had the most direct incentive program, offering a blanket $100 amount to any student that reported their vaccination via the self-report form, alongside entering vaccinated students into a raffle for additional prizes, including tuition and housing rebates. Every other school also offered drawings into a raffle, but few offered anything beyond that. UTA – also the only campus still actively providing incentives – did offer direct compensation to students alongside the raffle entry, but that came in the form of $50 worth of gift cards to the university bookstore per dose.

A perfect comparison between vaccination on public school campuses remains impossible because of their inability to compel students to report a positive case of COVID-19 or their vaccination status . Due to Governor Greg Abbot’s order GA35, precise data on the amount of vaccinated students, staff and faculty is unavailable for most universities. Some data, populated by students voluntarily reporting their vaccination status, is available: UTA reports 33% of students being fully vaccinated, while UTD has over75% of students reporting full vaccination status. At the time of publication, all six universities explored within this comparison do offer vaccines and boosters to students on campus.

UTD, like many other Texas schools, currently faces a surge in omicron cases across the community, and has therefore implemented some measures which are temporary reactions to that spike – which Martín said that the University expects, much like the delta wave last fall, to subside in the near future.

“I’m kind of out of the COVID prediction business at this point,” Martín said, “but what I’m seeing and hearing from experts in the field is that more than likely, this will subside to become endemic, with enough people having gotten COVID or been vaccinated over the past 24 months that transmission rates will decrease significantly and symptoms will decline in severity.”

Until then, UTD – alongside every other Texas university – will have to do its best to navigate COVID-19 as the coronavirus continues to mutate. While some policies will be fluid, mask recommendations, encouragements to be as vaccinated as possible and perhaps even the occasional switch to online instruction remain the norm for the time being…and foreseeable future.