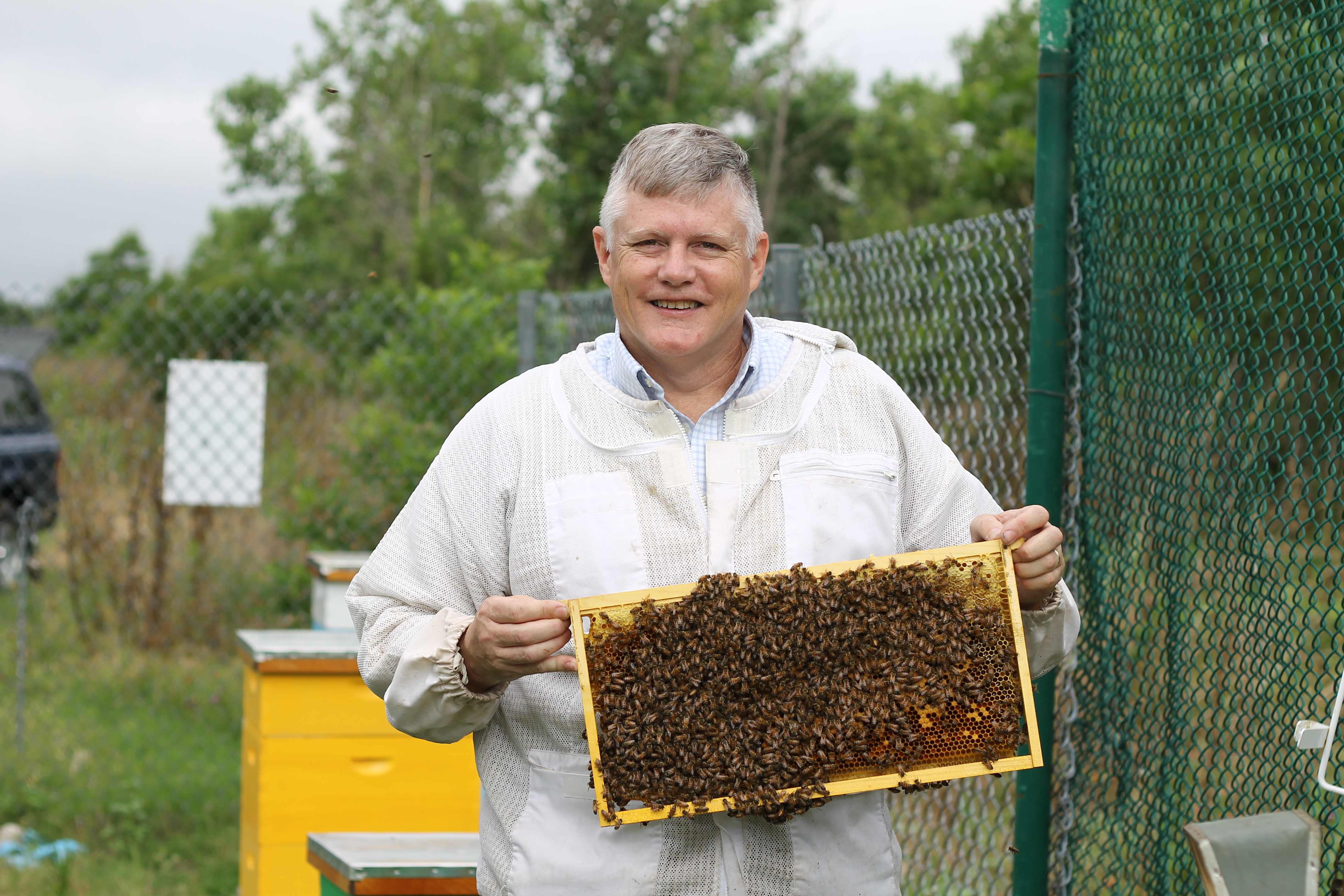 A hidden apiary located on campus grounds is abuzz with the thousands of bees living under the careful direction of Natural Science and Mathematics faculty member Scott Rippel.

At the apiary, Rippel will blow smoke into the boxes where the hives are placed to disorient the bees. After removing the lid, the writhing mass of bees busily working between slices of honeycomb is revealed.

The apiary first opened on campus in early 2014 after Rippel received approval from the NSM department head. This past spring, the facility expanded to allow for more boxes.

Rippel primarily uses the UT Dallas-funded facility for the hands on portion of his upper level elective course, Honey Bee Biology (BIOL 3388). The boxes, which each contain an individual hive, were all installed and painted by students in the course. The Honey Bee Biology class is open to all students who have taken introductory biology.

“Now that we have the apiary, it’s part of the course grade to come up and do an entire hive inspection,” Rippel said.

Rippel first pitched the idea of offering a course in honeybee biology shortly after he began keeping bees at home. His intention was twofold: to offer a unique upper level elective course and to relieve his fatigue from teaching the same classes over and over again.

“I needed to find a course that just stretched me and allows me to do something I don’t normally do,” Rippel said.

Biology senior Kristen Payne took the course in the spring of 2014 when it was first offered. At that time, there weren’t any hives in the apiary. Her class built the first boxes as part of a project for the course. She has gone on to be a TA for the class multiple times.

“I am sure I speak for every bio major in existence when I say that we are so sick of hearing about the cell cycle,” Payne said. “To hear something about bees is just so refreshing.” Rippel uses his survey course to teach students about beekeeping methods, but primarily lectures on the behavior and anatomy of the honeybee.

“A lot of the behaviors you see are genetic, but how they’re controlled is based upon what’s happening in the hive,” Rippel said. “This is truly a social organism. If you take a bee and set it by itself, it’ll die.”

Rippel first learned an appreciation for bees from his grandfather, who was also a beekeeper. Years later, Rippel rediscovered his passion for the insects.

He initially purchased bees to begin his colonies at home. When he started the class at UTD, however, he took to capturing swarms that plagued campus. Several of the boxes in the apiary are filled with bees that were caught near JSOM and the parking garage.

Rippel learned techniques for beekeeping through videos, books, and courses at the Collin County Hobby Beekeepers Association, which is one of the largest beekeeping organizations in the country. More than anything else, Rippel has learned through trial and error.

“I read the books and the books say one thing, but the bees haven’t read the books, so they do whatever they want,” he said. “There’s a lot of science to the bees, but as far as beekeeping for raising honey… that’s kind of almost an art.”

Rippel and his students have collected about 50 pounds of honey between just two of the many hives. They are unable to sell their product for profit because the university funds the facilities. Instead, the beekeeping team gives the fresh honey away as gifts or at the demonstrations they host at the Dallas Arboretum.

Biology senior Lauren Rosene was in the class last spring. She, along with a few other students, went to the Dallas Arboretum to teach children about bees and to dispel some myths about how they operate.

“A lot of times they think you have to save each bee individually, and honestly, before I took this course, I felt the same way,” Rosene said. “It’s kind of nice to teach them that you want to think about the entire hive.”

Rippel said the life of a bee revolves around the hive rather than the individual.

“An individual bee is nothing,” Rippel said. “It’s really the colony as a whole. It’s a super organism.” 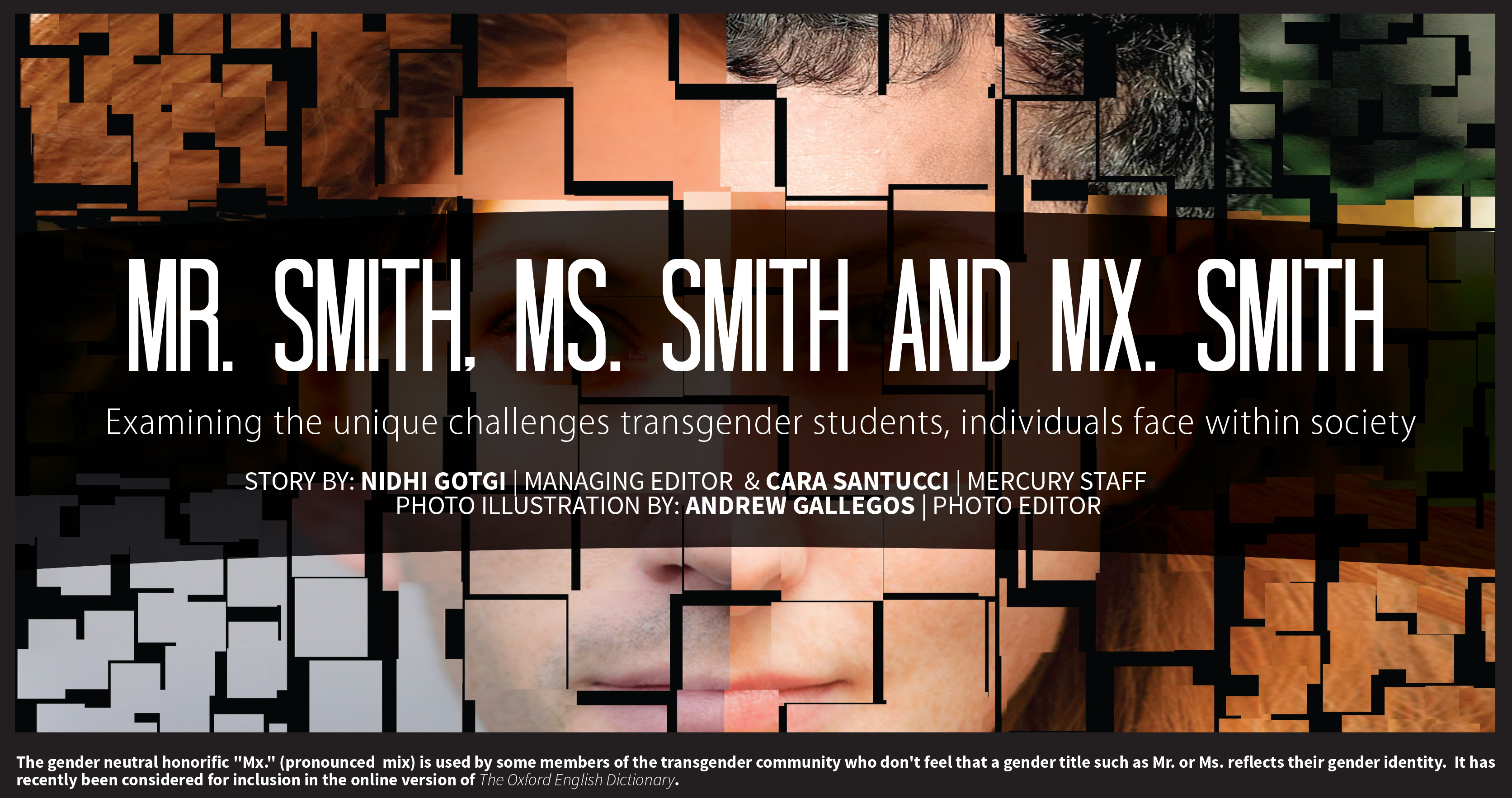 As an UTD alumna and urban beekeeper, I love this! Kudos to Prof. Rippel.