The bobcat’s out of the bag 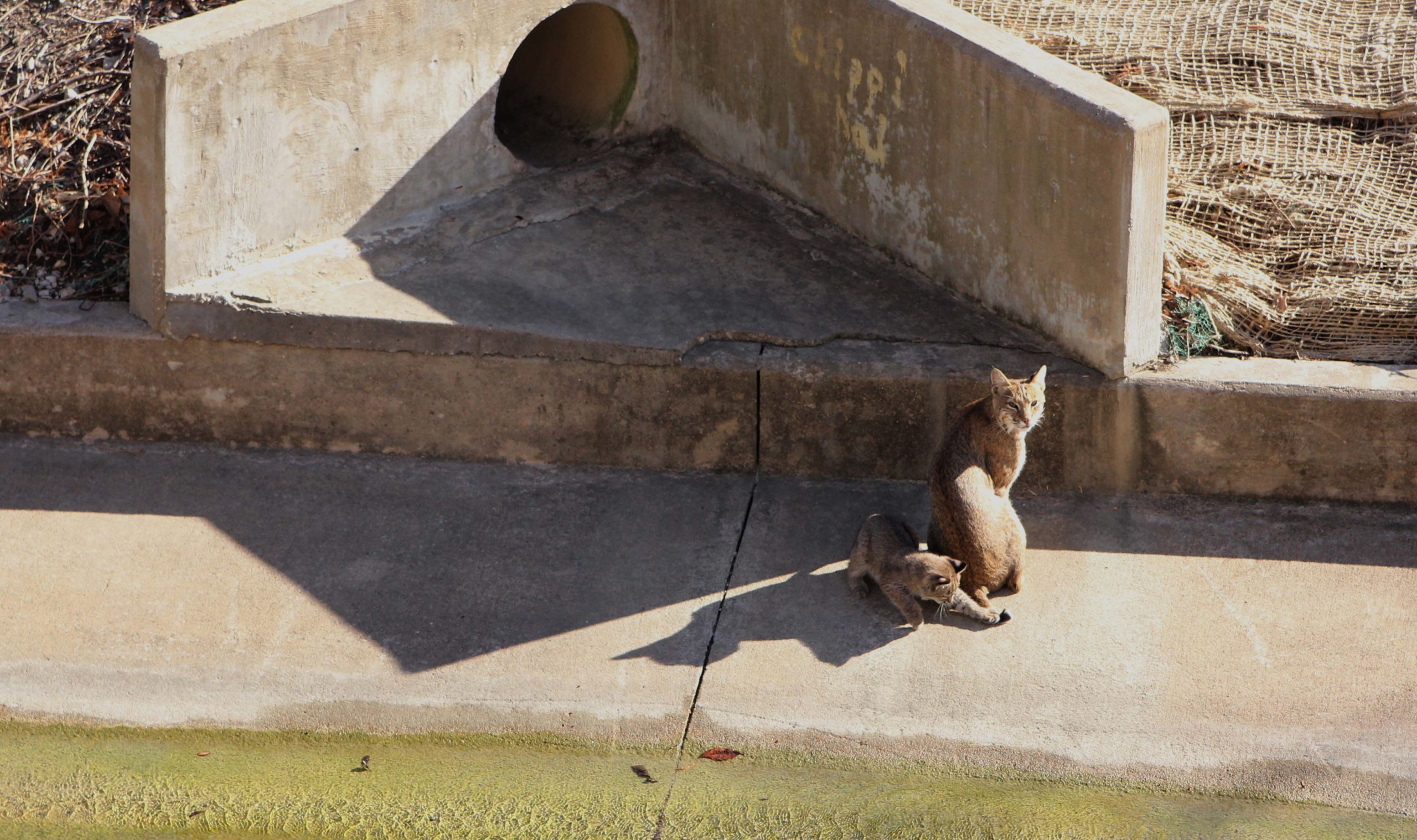 Students should be cautious if they have small pets, but the bobcats’ presence is a net-good in terms of keeping the populations of other species under control. (Photo courtesy of Brittany Thu-Anh Huynh, Office of Facilities & Economic Development).

Two bobcats were spotted on campus in January, thought to be due in part to decreased traffic on campus and the biodiversity efforts of the Office of Sustainability.

According to a photo posted on the Facilities & Economic Development website on Jan. 14, an adult bobcat and its kitten were seen in the middle of the day near a storm drainpipe. Gary Cocke, director of energy conservation and sustainability, said that the photo was taken along the creek near the UV housing north of Franklyn Jenifer Drive.

“What I think (the photo) is indicative of is just simply with lower traffic from people on campus, we’re seeing some wildlife poking up in locations that we haven’t normally seen,” Cocke said.

While the presence of bobcats is likely caused by a quieter campus, Cocke said, it’s also the result of an environment that can support the native species. Sustainability efforts such as the monarch butterfly waystations on campus help create a healthy base for the ecosystem, which ultimately allows the presence of predators at the top of the food chain, like bobcats.

“Ecosystems really do require apex predators like bobcats that can help to keep everything in balance; they control the animals that are lower than them on the trophic ladder,” Cocke said. “I thought it was a testament to the good work that our university does.”

In recent years, Cocke said, the Office of Sustainability has launched a number of initiatives designed to increase biodiversity on campus. Many of the campus’ 7,000 trees have been planted in the last decade, and they’ve planted wildflower seeds on five acres of campus in the last few months.

A multi-year Texas Parks and Wildlife study published in 2019 found that despite rapid urbanization and loss of habitat, a larger-than-expected bobcat population in North Texas persisted. The research focused on a 78 km2 central section of the DFW area, which was selected due to a relatively high volume of bobcat sightings in the area. At the time of the study, an estimated 43 bobcats lived in the section.

“A robust population of bobcats in the heart of a dense metropolitan area like DFW provides optimistic possibilities for the potential of bobcats and other carnivores to thrive in urban landscapes with minimal conflict,” the study said.

There have been other bobcat sightings on campus in recent months: according to a post on the UTD subreddit by user u/Deanuna on Nov. 27, a single bobcat was spotted between the Jonsson and Green buildings.

A webpage on the City of Richardson website said that while there have been no reported bobcat attacks on people, there has been an increase in bobcat activity in the nearby Canyon Creek neighborhood, largely due to the habits of the people who live there. Allowing pets to be outside unattended and leaving trash cans out for long periods of time are behaviors that can attract bobcats.

“People, either intentionally or unintentionally, have conditioned wildlife to understand that neighborhoods are full of food, water, and shelter,” the website said.

According to the Texas Parks and Wildlife Department, bobcats tend to be active at night when they hunt birds and small mammals such as squirrels and rabbits – animals that are prevalent on campus.

Cocke said that because bobcats are native to the area, the ones seen on campus are not being actively managed. Students should be aware and cautious if they have small pets, said Cocke, but the presence of bobcats is a net-good in terms of keeping the populations of other species under control.

“I think that seeing things like bobcats on our campus is actually a good thing, that our ecosystem is supporting these native species that really should be here,” Cocke said. “And so, I think that we should really embrace that.”