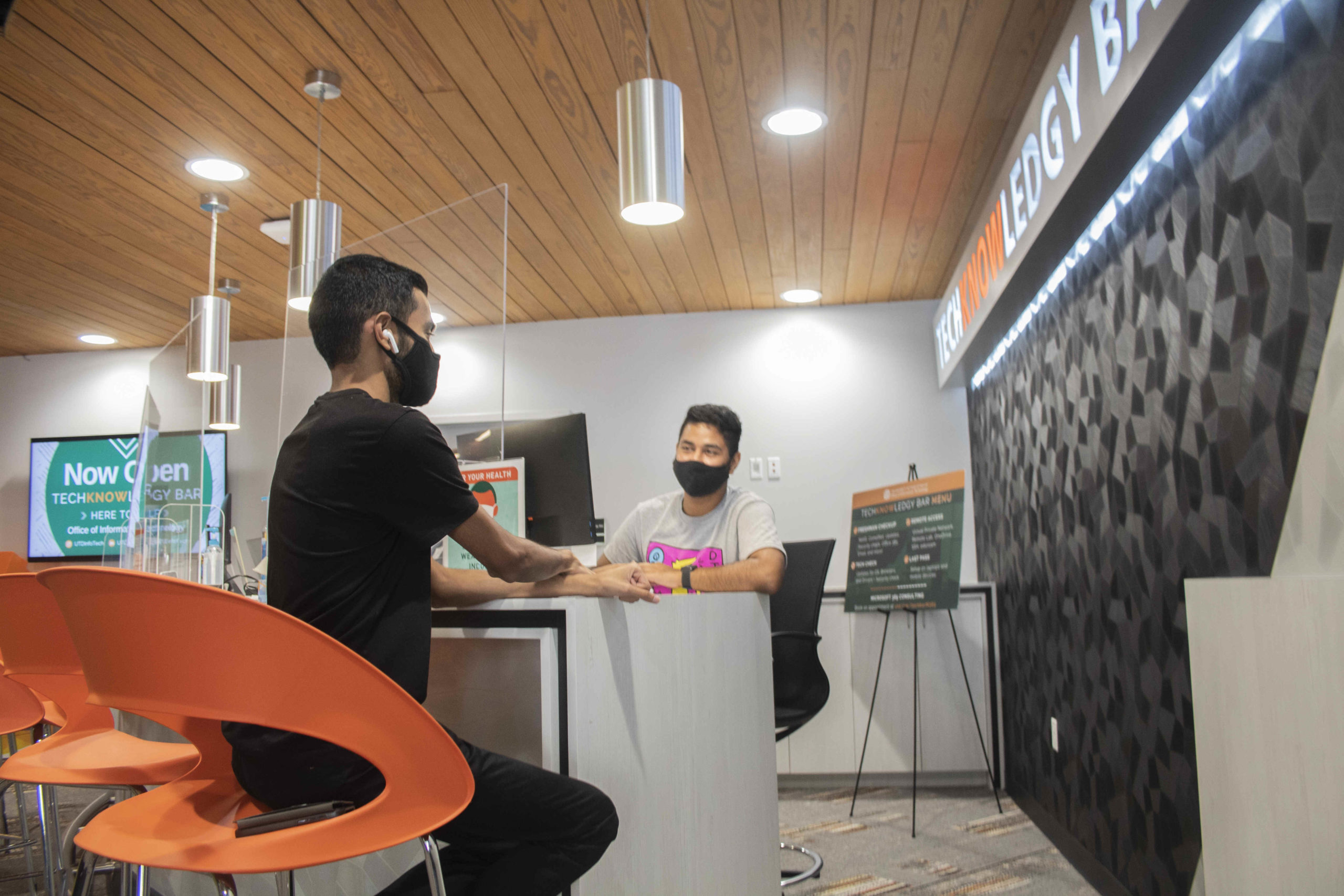 Are you or a loved one suffering from computer gremlins? Luckily, OIT’s newly-opened TechKnowledgy Baris conveniently located in the lower floor of the Student Union and is dedicated to showcasing new technology and helping Comets resolve any device-related headaches.

Though not the first time that OIT has had a walk-up help desk, Chief Information Officer Frank Feagans explained that the Tech Bar’s capabilities and location make it far superior to any previous project.

“We’ve never had something like the Techknowledgy Bar, per-se. We had a walk-up help desk way over in the ROC because we were unable at the time to secure another space on campus, but over the past two years, we were able to work with Dr. Fitch, who saw the need, and he provided that space there in the Student Union to put it in.”

In terms of functionality, the Tech Bar provides the same services as OIT’s walk-up help desk. But, Feagans said, it goes “way beyond what was in the ROC two years ago.” The Tech Bar is intended to serve as a technology showcase as well as a place where more specific hardware fixes can be entertained. Moreover, it’ll be a centralized location for OIT to house the student loaner program and distribute the electronic devices that students need, and it’s also going to have a small area running video for OIT training and outreach.

Naqvi Khan, a computer science senior who works for OIT, highlighted the outreach advantages of the new space.

“I feel like this is one of the prime locations on campus for a walk-up,” Khan said. “Students are always passing by, which gives them a lot more awareness to our service existing for them when they need it. And the dedicated space of the bar itself gets us a lot of exposure, which makes it a good spot for OIT to cater to specific technology needs of the different campus populations.”

The initial vision for the Tech Bar project was conceived by Shannon Cepica, a direct report of Feagans’s.

“Shannon – who unfortunately passed away last summer – was really the vision for this project,” Feagans said. “It started about three years ago, and he kept building up interest and momentum for the project, and then he shared that vision with Pulin Bhatt, who kept the energy going. Then, Dr. Fitch got involved, he saw the need, and he provided us the space in the Student Union to put it in.”

The key to making the whole project come together, however, was Shannon’s conversations with Student Government and the student body. Feagans said he broached the idea with them early on, and students were immediately on board, even beginning to lobby for this to reach fruition. This, in turn, caught the attention of Student Affairs, from which point Fitch brought the idea to several other student groups, who ultimately came up with the name for it. While the pandemic slowed the rollout of this space, UTD’s commitment to the Tech Bar project never wavered.

“We were well underway to deliver it last year, and then COVID hit, so the project stalled for a little while – but we never gave up the dollars,” Feagans said. “Even with all the budget cuts, we made sure to keep that project alive because we knew how important it was to the students from the feedback we got.”

As learning returns to campus, demand for the Tech Bar’s services is expected to increase substantially. But enthusiasm about the Tech Bar isn’t coming just from those in need of its support. As Khan put it,

“We’re also super excited to have this space. We’ve all been studying and working remotely for the past year and a half, so it’s great to be able to finally interact with people again and help them out face-to-face.”