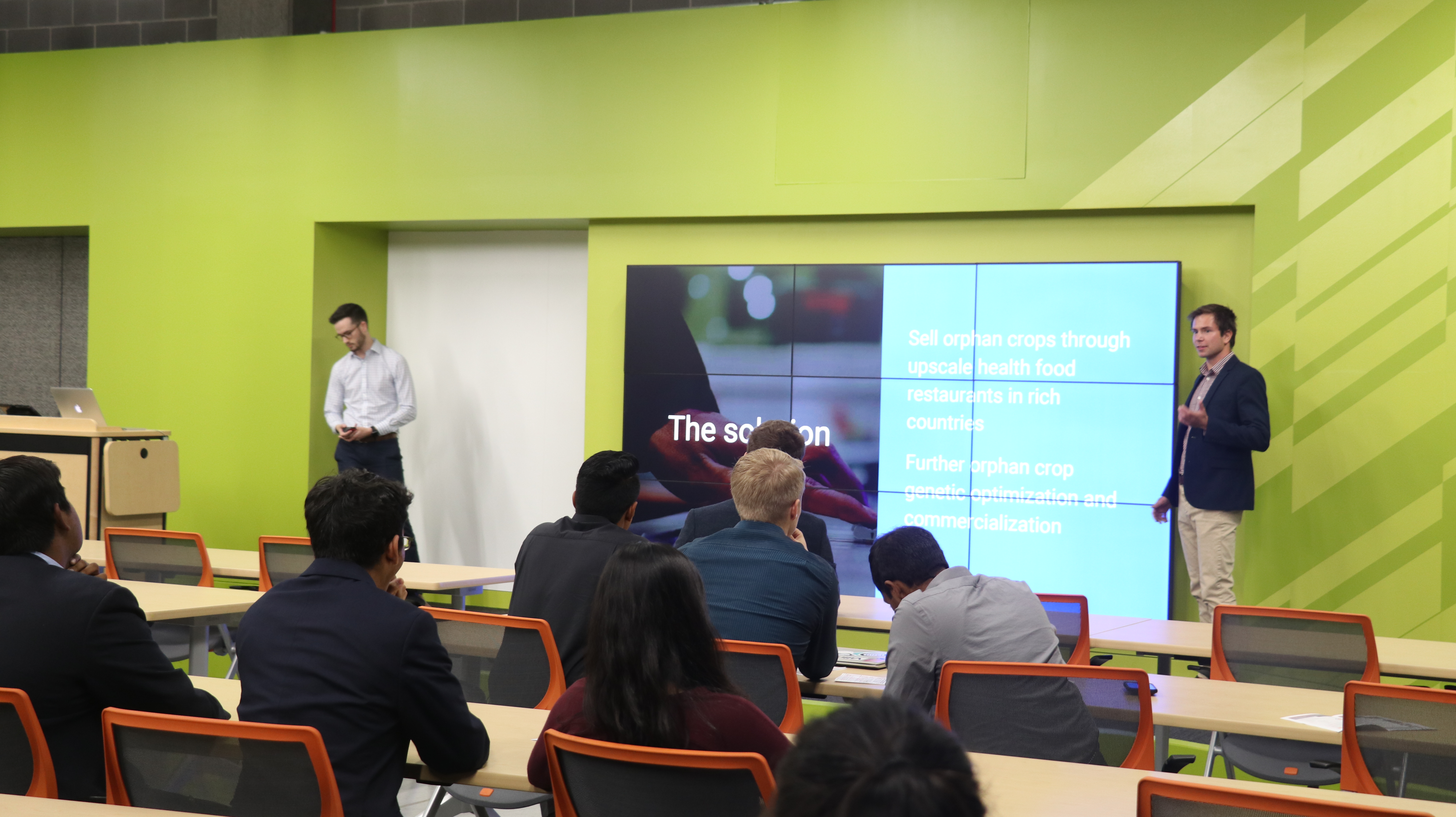 A team presents their idea in front of a panel of judges during the competition. Photo by Xiang Li | Mercury Staff.
Editor's Picks
News

Alta Air, composed of finance and economics juniors Konan Mirza and Jason Tran, and electrical engineering junior Yosias Kassaye, took home the first-place title on Nov. 30. The three juniors will move on to regionals, hosted sometime between January 2018 to March 2018, as each team has a different competition date.

“We were (surprised) because we always go in with the worst expectations,” Mirza said. “It was surprising, but we are just excited about this journey.”

Utilizing modular drones with interchangeable lasers, Alta Air hopes to reduce or completely eradicate air pollution by adding their products onto airplanes. That way, the aircrafts will use the Alta Air technology rather than fossil fuels.

Ten teams competed in the Social Entrepreneurship Pitch Competition, also known as HULT PRIZE. The teams were allotted five minutes to present in front of four judges and present their idea addressing the prompt, harnessing the power of energy to transform the lives of 10 million people by 2025, in hopes of ultimately winning $1 million to invest in their business.

The competition offers students an opportunity to create or redesign an effective, environmentally-friendly business, and once students are given the prompt, their first step is competing in the campus-level competition.

The event incorporates multiple stages, and during each stage, winning teams will be given mentors and advice, courtesy of HULT PRIZE.

Alta Air heard about the competition while they were pitching at the Big Idea competition on Nov. 16, and decided to compete.

“This competition is more about how are you going to help people, why are you passionate, how is this actually going to make an impact … I think that that is a better route to take,” Mirza said. “If you are passionate about something, rather than about how you are going to make money, (that) is more our way of thinking.”

Junior electrical engineering student Bradley Ritschel was unable to compete last year because of students’ lack of interest, so this year he was determined to make the competition work and became UTD’s HULT PRIZE campus director. Ritschel said the main reason the competition hadn’t worked in the last two years was because of marketing issues. However, the competition’s opportunity was one of the reasons that Ritschel wanted it to return to UTD, and was happy to see the competition come together.

“It was awesome,” Ritschel said. “It has been a long time recruiting teams and also mentoring the teams and getting judges. We haven’t had the competition here at UTD for a year or two, so I am happy to bring it back.”

From now till the end of January, Alta Air will work with Ritschel and other mentors, striving to secure a winning spot in regionals, all in the hope of earning $1 million to invest in their project.