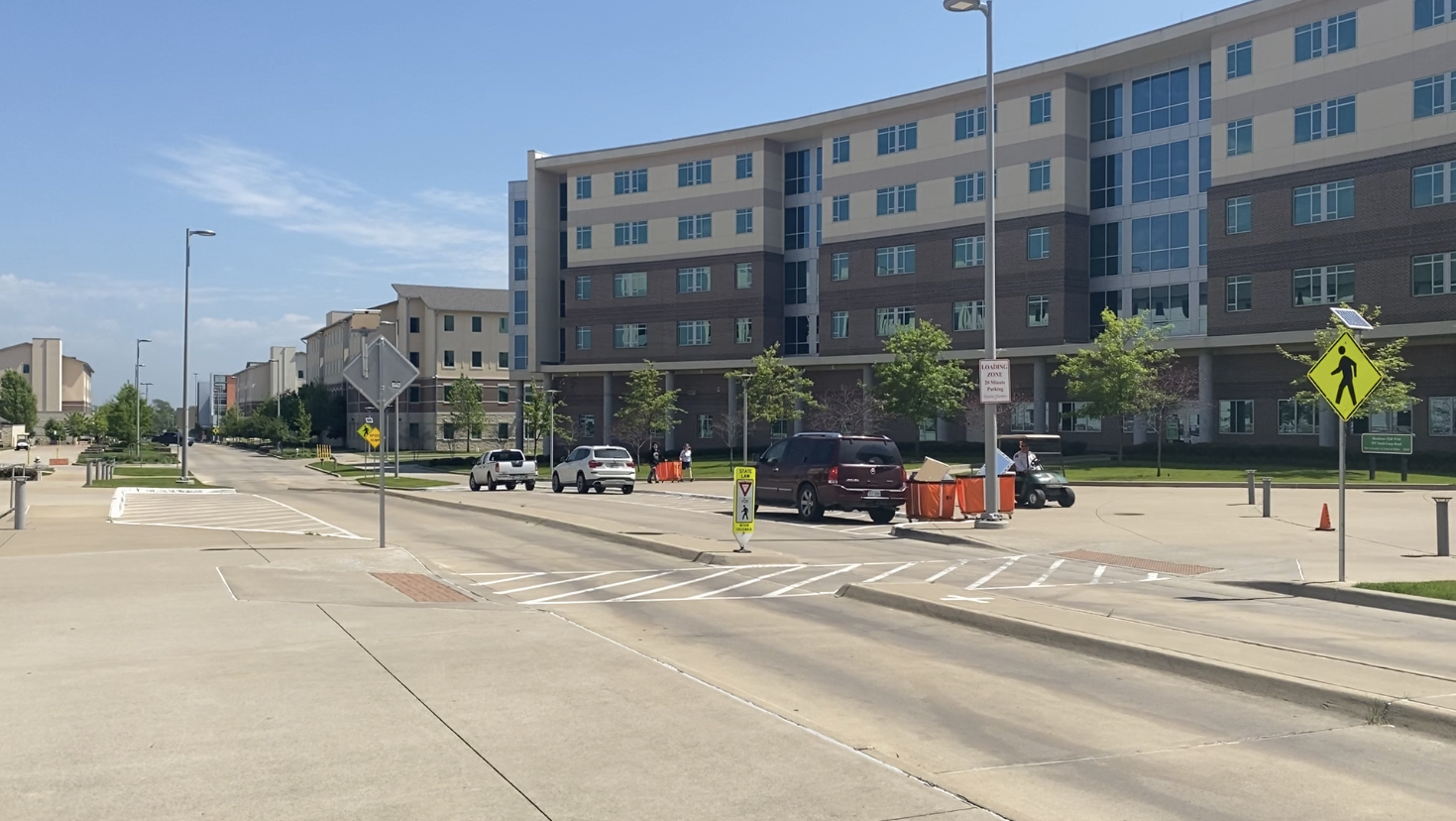 Students move out of Residence Hall West on March 26 after the university urged residents in Canyon Creek Heights and University Commons to leave by March 29. Photo by Cindy Folefack | Editor-in-Chief

How campus housing changed in wake of COVID-19

In mid-March, UTD began asking students living on campus to start the move-out process in response to the coronavirus pandemic. Now, those students say they miss dorm life and are adjusting to moving back home.

Information technology and systems sophomore Eileen Sharmin moved out of University Commons on March 22. She said the transition from dorm life to back home has been rough.

“I really liked living at the dorms, and of course having to move back isn’t that great, but you have to do what you have to do. It was just really cool to meet everyone when I was living in the residence hall. It’s sad it ended like that, but we’ll make next year better,” Sharmin said. “Before we even got off for spring break, we weren’t sure what (was) going on. But I was planning on going back to the dorms until they said they were doing a refund.”

Prior to the pandemic’s spread within DFW, UTD officials said that housing would be open until the end of the semester. On March 18, University Housing released moving instructions for students living in University Commons and Canyon Creek Heights, stating they would need to leave by March 29 unless they had no suitable alternative. University Village residents were allowed to stay until May 11.

Assistant Vice President of Student Affairs Matthew Grief is  one of the people overseeing move-out. He said that there were 1,994 and 711 students living in University Commons and Canyon Creek Heights, respectively, at the beginning of this semester. Now, Grief said, University Commons has 400 students while Canyon Creek Heights has 200 and those figures are changing daily.

“(University Commons and Canyon Creek Heights) were chosen based on the close proximity of how those students lived together in a close environment, common entry points to buildings, and common air circulation,” Grief said. “University Village is single-unit apartments without those features, so it did not get the same treatment. Students had to leave the two facilities unless there were extenuating circumstances.”

On March 19, students were sent an exception form to fill out if they could not move out of University Commons or Canyon Creek Heights by the required date, which was useful for the 554 international students in UTD housing this semester or those who had nowhere else to go. Any other requests are reviewed on a case-by-case basis, Grief said.

“(For) any student who did not renew their housing for fall 2020, we are recommending they immediately look for housing options that are off-campus,” Grief said. “Our assumption is many of these students would have already obtained or begun looking for housing for the summer and fall. We will allow any student who has renewed a place in University Village or Canyon Creek Heights to remain on campus throughout the summer..”

On March 31, Texas governor Greg Abbott signed an executive order urging citizens to comply with social distancing guidelines and only leave home for essential activities such as trips to the grocery store. The order is in effect from April 2 to April 30.

Cognitive science sophomore Suraya Musa moved out March 25. She said she understands the need for the move but misses the people she lived with in University Commons.

“I lived there for two months, but I feel like I was becoming a better person,” Musa said. “I feel super unproductive at home. At UTD, I would study in the library and relax when I got to my dorm. I got my work done on time. Now, I feel like my school life and my personal life have collided, and I’m personally having some difficulties adjusting. I’m also not sure how the refund works or when I’m going to get it, so I’m trying to figure that out.”

The daily rate for refund policies differ by student housing facility and depend on when a student moved out, Grief said. The refund will be processed through the Bursar’s Office and will be applied to any outstanding fees before the remaining balance is released to the student.

“For students in University Village, if they choose to move out between now and the end of the semester, (their refund is)  going to be based on the date they moved out as well, but the daily rates between facilities differ due to factors like … having different move-out deadlines,” Grief said.

On March 27, University Housing released amended housing instructions that required students to sign up for a check-out time to limit the number of students coming in contact with each other.

“It has been a very smooth check-out process for our students where we limited contact and practiced safe social distancing during the process with limited issues,” Grief said. “We allowed students to use moving bins, but we were also cleaning them after every use. We limited access to one student and three family members to help out, so we’re limiting the number of people in the facilities. Now, we’ve actually reduced access to the facilities to only those who are given an exception to stay. Students who still have stuff in their room but are not able to come back, we’ll give you access once you sign up for a time to come back.”

Students living in Northside Apartments who want to move home face a dilemma of paying rent after moving out or losing their housing. Information technology and systems junior Nayanika Papineni said she left March 15 but is still paying rent for April.

“I have two roommates I live with at Northside, and we have a lease until August. We renewed it for next year,” Papineni said. “If we don’t pay rent, there’s no guarantee we will get another apartment next year.”

As a response to the situation, Northside has pushed rent payment from April 1 to April 15 and temporarily suspended late fees until that date. If students stop paying rent, they will be in violation of their lease agreement and can be evicted.

In August, a new batch of freshmen will enter the campus. If online classes continue, the need for student housing may decrease.

“Our first goal was to get everyone out. We’re treating fall as a normal semester. We’re still making offers to residents for apartments,” Grief said. “If something does change, we will make adjustments, but we won’t know that until a few more months.”