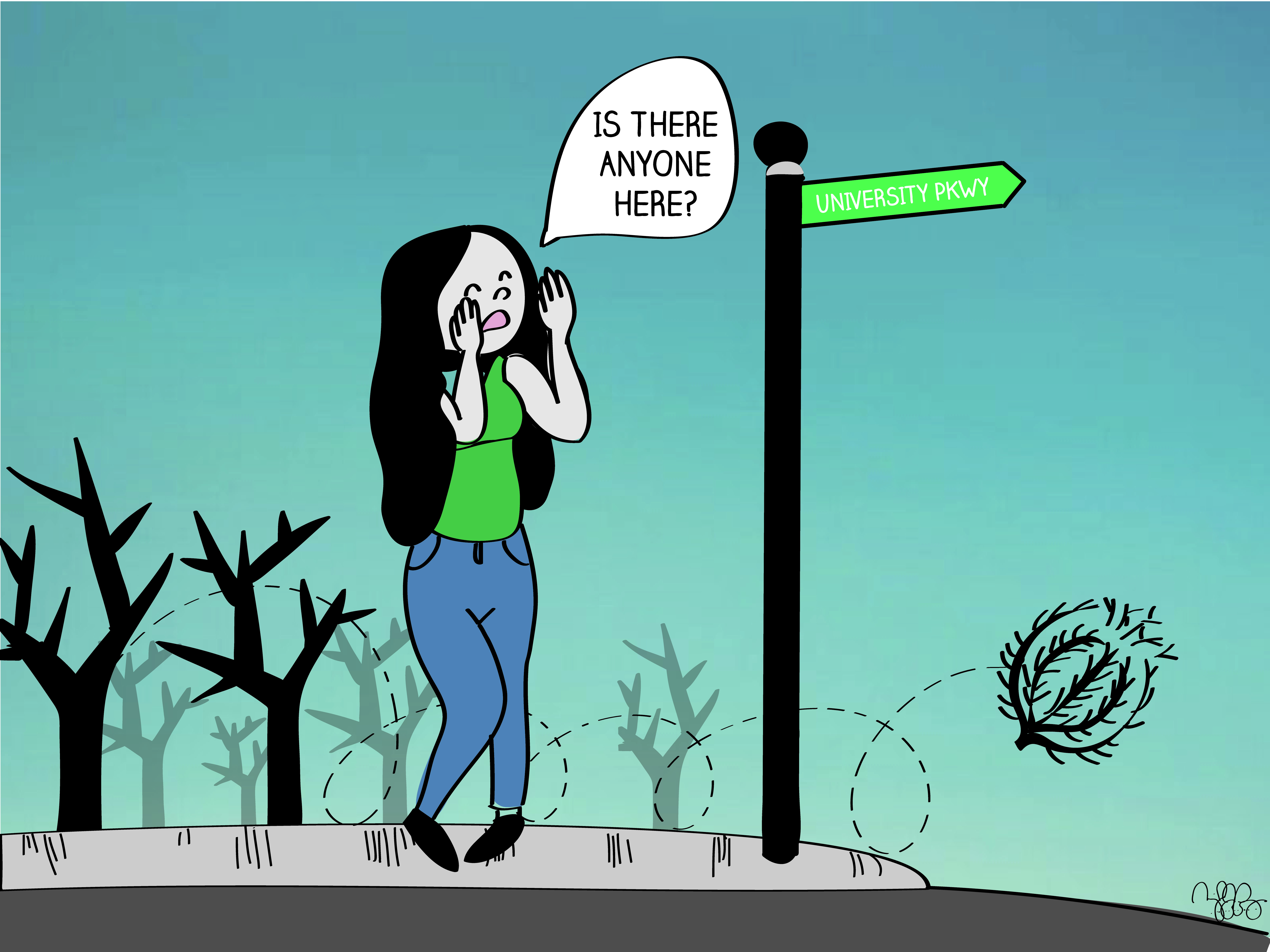 Reading the UTD Confessions 3.0 Facebook page, many of the posts about the university are unmistakably negative. Bashing the university occurs not only on Facebook, but also in several posts on other social media platforms such as Yik Yak, describing UTD as devoid of social opportunities due to its student-proclaimed characterization as a nerd school.

This assertion is baseless considering the fact that the Student Union and Activities Advisory Board, or SUAAB, and other campus organizations are actively trying to create events with wider appeal. An example of this was last year’s homecoming dance.

Students swiftly entered the warmth of the student union for the 2014 homecoming dance on the cold November night. The vision that greeted them as they traversed through the building could only be described as the most confusing yet brilliant conglomeration of themes imagined to date in the history of UTD.

However, despite the diversity, the majority of students on campus did not set foot inside one of the university’s biggest traditions.

According to Sereena John, executive chair of SUAAB, almost 700 people attended the dance.

Though that may sound like a staggering number, out of the more than 23,000 students enrolled in fall 2014, only about 3 percent of the population attended the event.

Given that attendance to other collegiate events is even lower, it indicates that there is a general lack of interest on campus for the majority of students.

If the diversity of homecoming is not evidence enough, SUAAB and Meteor Theater have big plans for diversifying further for the upcoming semester.

“We have Comic Con, so that people that do like playing video games, anime characters and things like that also get a chance to come to events and show what they love to do,” said SUAAB traditions chair Aradhana Bagaria. “So, we really like to have events that cater to every demographic.”

With plenty of preexisting events and new opportunities for students to participate in, the environment of the campus cannot be blamed for the disinterest present at UTD. The unfortunate truth is that the majority of students do not involve themselves in campus life. Apathy is inherent in many students and cannot be attributed to lack of opportunity.

The level of campus involvement among UTD students is at two opposite levels. Students who are involved in organizations often exert themselves entirely, show UTD pride and volunteer at campus events. Apathetic people are not usually in campus-related organizations because the duties involved are many times too work intensive to do out of anything other than passion.

The other students do not involve themselves. They come to classes, study for tests and graduate for a degree. This notion is not meant to label all of these individuals as introverted; they may be incredibly social people among their own friends. The problem is that they bring almost nothing to campus life and graduate with almost an invisible presence.

There are several common reasons given as to why this problem of apathy exists. Some blame the lack of a football team and believe the deficiency of Division I sports can hardly inspire school spirit.

While sports is a major factor in university spirit, UTD’s teams make up for the lack of football both in tournament performance and in rising audience numbers.

Associate Athletic Director Bruce Unrue said that attendance for all of the teams has been increasing over the last few years.

“It all kind of started last year with basketball with the playoff games at home,” Unrue said. “We had some of our biggest crowds ever at those events and that’s kind of carried over to this year, and when the soccer team had the tournament here and also hosted NCAA games, we had a very good turnout even with bad weather those nights.”

The athletics department is also promoting student attendance at games by offering the Comet Cash Jackpot. At halftime of each game, a student’s name is randomly drawn from the entire list of enrolled students. If that student is present, the cash will be awarded; if not, the money rolls over to the next game.

“Now it’s up over $2,000, and by the end of basketball if no one wins it it’ll be up to $5,000,” Unrue said. “At least now people are paying attention at halftime to hear if their name gets announced, so that’s been one thing.”

The sad part is that the athletics department has to incentivize students to attend sporting events for teams that are actually doing very well in their leagues.  Incentives are offered to people to encourage them to do things that they find annoying or unimportant on a regular basis, such as when residential life and other organizations offer students the opportunity to win electronics for completing satisfaction surveys.

That sporting events can possibly be compared to dorm satisfaction surveys shows that the apathy on campus is a legitimate issue and should be addressed.

Another possible reason for lack of student participation is the fact that UTD is a commuter school. Most students live in nearby suburbs and drive to campus on a daily basis. Also, many students who live on campus go back home each weekend and leave the university looking like a ghost town.

If a student is not on campus on the weekend then he or she cannot take part in campus life during those days. Still, the allures of college life in America are prevalent throughout the nation. This is not a country in which the sole purpose of college is to educate. Universities in this nation serve the higher purpose of making students both intellectually and emotionally whole.

Students who want to be a part of this college experience can make the effort to stay longer on campus even if they are commuters. It is an entirely personal choice and many commuters do choose to involve themselves on campus.

Still, other people may argue that UTD is destined to have low involvement because it is not a liberal arts school or because many of the students enter on academic excellence scholarships and focus mainly on academics.

If this argument had any merit, then the Massachusetts Institute of Technology, a very non-liberal arts and academically rigorous university, among other top universities, would have absolutely no social life, which is not true considering the cultural events, social protests and long held traditions found on such campuses.

Our campus has been diagnosed with a sad case of indifference, but this can be remedied with a strong dose of passion. The university is currently growing in both infrastructure and credentials with the goal of attracting more high-achieving students to make UTD their academic home.

With this rapid influx of interested students from across the nation and world, activity on campus is bound to increase. There will be an upward trend of students participating in events that they feel strongly about, voicing their opinions and making a mark on this campus.