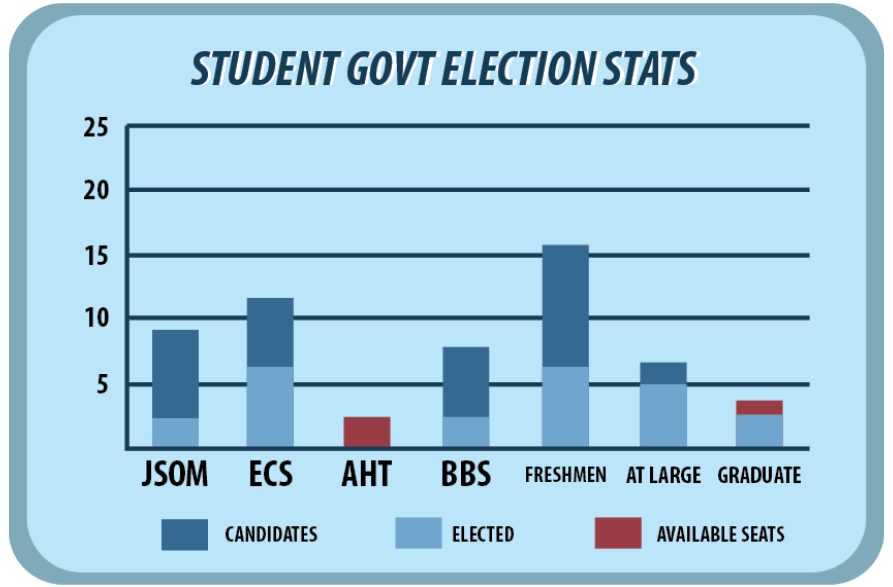 The UTD Student Government wrapped up its fall elections with an addition of 23 new senators, creating a senate body with minimal appointments necessary.

As SG focused on enhancing the recruitment cycle, this race was much more competitive than past elections.

“We really focused on recruitment and getting as many people to apply for positions as possible, as many people to run. We had a solid goal of making every position competitive…[and] we succeeded,” said Margaret Moore, the SG Vice President.

After years of decreased participation, SG recognized that transforming the recruitment period would result in visible improvements. One substantial shift they made to the elections process is lengthening the filing period, during which current senators would personally reach out to potential members to encourage them to run. This year, senators’ outreach began long before the election cycle. SG tabled numerous initiatives at various Weeks of Welcome events. They laid their foundation by handing out flyers to build awareness and encourage students to participate in the elections, which allowed a solid presence at orientation. Throughout this process, a common belief among all contestants was a passion for getting involved on campus and advocating the same for their peers.

“I think a very strong shared value is getting more engaged,” Moore said. “A better student experience. And maybe they don’t know exactly what that means yet because they haven’t been involved for super long at UTD, but that’s that passion that comes in that.”

This year, SG is moving toward being more visible on campus. To this end, they have been collaborating directly with organizations on campus, posting weekly meetings on the Comet Calendar and flyers to advertise essential discussions.

Students can find the SG offices on the second floor of the SU across from the Galaxy rooms. The next general body meeting will be held on Oct. 4 at 5:30 p.m.in the Galaxy rooms; meets are held every other Tuesday. Both general body and committee meetings—held at the same time and place in the Tuesdays in between—are open for the public to attend.

“If you want anything done in student government, if you have an issue you’re passionate about, come to meetings, email us, just send me a Teams message… We are accessible. We are a resource to students for a reason,” Moore said. “Don’t just complain. Complain to us.”