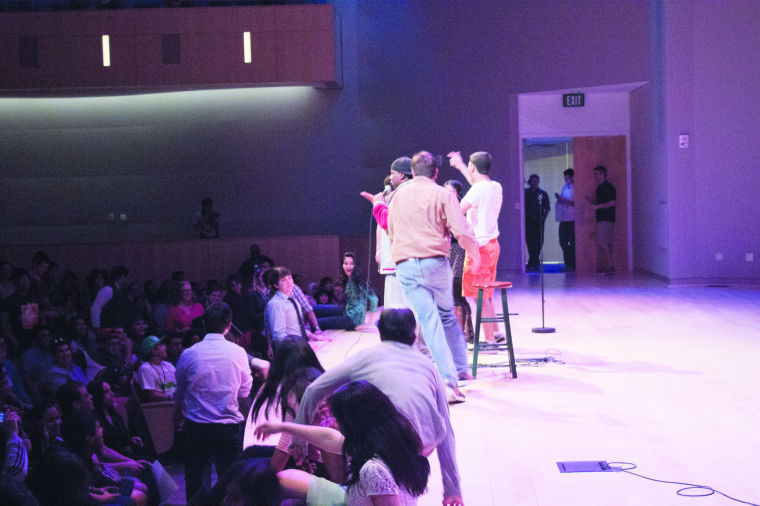 Peers have been condemning UTD students for their behavior at Kenan Thompson’s performance on campus, and rightfully so.

On March 20, more than 1,200 Comets lined up to see the Nickelodeon and “Saturday Night Live” star, along with comedian Paul Varghese, at the ATEC Lecture Hall.

The Student Union and Activities Advisory Board, or SUAAB, hosted the talent as part of its annual Big Bad Comedy Show. With about 300 students turned away after the auditorium was filled, those inside appeared grateful and anxious to witness their childhood celebrity in the flesh.

But once the Q-and-A segment started, all awe and respect seemingly dissipated.

“Kenan Thompson did a question and answer session at UTD and I have never been more ashamed of the people who go here,” tweeted an audience member.

The much-anticipated guest speaker turned into a prop for students to tout on their social media platforms, while they regressed into questions that were anything but reflective of an intelligent, academic community.

“Have you ever watched ‘My Little Pony?’”

“Do you know what Delta-ing is?”

Very little of the Q-and-A actually consisted of questions, but instead was marked with continuous requests for selfies, fist bumps and dog-trick tasks. One student even went as far as insulting Thompson’s unborn child’s name, while others asked potentially racist questions.

Early on in the session, Thompson agreed to a selfie with a student, only to be bombarded by others climbing onto the stage to besiege Thompson.

The scene, and in essence the entire Q-and-A, made UTD students look awkward, rude and uncivilized.

Booing ensued while audience members sank in their chairs, and the editorial board of The Mercury wondered what this would do to UTD’s reputation.

This was, after all, a unique situation because each member of the audience, which consisted mostly of students, represented the university. Big-name acts at other colleges often require tickets but allow outside attendees. Even for the ATEC Lecture Hall, this was the first time to fill the auditorium entirely with UTD people.

“I think we seriously chased off Kenan and other entertainment celebrities from ever visiting our school,” one reddit user posted.

She said Thompson was “definitely okay” after the show and down-to-earth throughout the entire process.

Thompson also knew what he was getting himself into, said Ted Yu, executive chairman of SUAAB and molecular biology senior, as he was the one who notified SUAAB when he reached campus that he wanted to call students up at the end of the show.

“One of the things that I think is really really important to consider right now is that Kenan, in filling the role as a comedian and then requesting the Q-and-A, I believe he felt he was fully self accountable for the occurrence,” Yu said.

So the concern is not what Thompson or future performers think of our student body, but what we think of ourselves.

Since each of us on the editorial board joined UTD, students have persistently commented on how socially inept our student body is. Audience members’ posts resurfaced this culture, and from the performance, it becomes clear why people think that way.

But this is not who we all are at UTD. A handful of students asked Thompson legitimate questions, including what his SNL audition was like. The power of peer accountability can work wonders.

SUAAB will screen questions for future Q-and-A events, but that will simply sift through the trash, not eliminate it.

We will only be able to foster unity and community if students can listen to others and treat people with respect. Learn to take no for an answer — yes, you selfie lovers — and think before you act.

“Welcome to Good Burger, home of the —”

Interests on loans too much for students