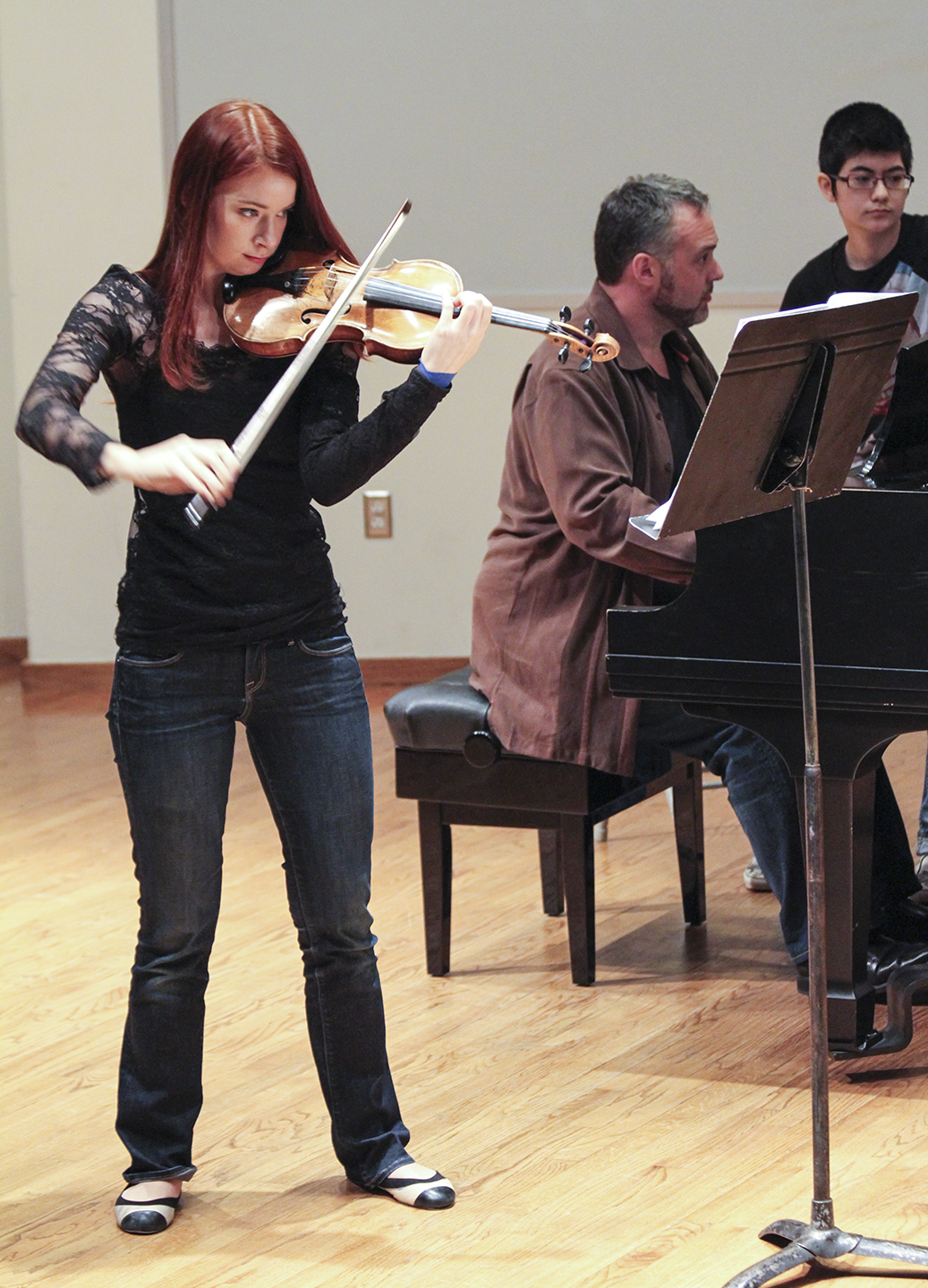 On Feb. 19, violinist Chloé Trevor and pianist Jeff Lankov performed in the “Music of Today” show in the Jonsson Performance Hall sponsored by the School of Arts and Humanities. The show saw the world premiere of Chair of Art and Aesthetic Studies Robert Rodriguez’s new piece, “Xochiquetzal.”

Q: When did you begin playing your instrument?

Lankov: I began playing the piano when I was about 8 years old, which is actually fairly late for somebody who makes a career in music. I went to a friend’s house and they had a grand piano and I was just drawn to it. The neighborhood kids taught me a few songs, which I learned pretty quickly, and then I begged my parents for piano lessons for quite a while — which I think is different from how a lot of people got into music where their parents more or less forced them to take lessons. For me, it was a hunger. It was just something that I wanted to do instinctively. My parents very often had to tell me to stop practicing and go outside and play soccer.

Trevor: I don’t have any exact time, honestly. My mom is a violinist in the Dallas Symphony and my dad is a conductor, so after I was born they were always kind of looking for little violins for me because I apparently would sit and be entranced while watching my mom practice. When I was 18 months, my dad found a real 32nd size violin that my mom started helping me play a little bit. I just kind of always had it and played on it a lot. But as far as actual lessons starting, I’m not really sure. I was around 2.

Q: How many hours would you estimate you’ve spent playing?

Lankov: Thousands and thousands of hours. These days, I practice regularly seven, eight, nine hours a day — some days more — but it’s something I do every day. It’s just a lifestyle. Whereas most people might sit in front of a desk or a computer, my desk is actually sitting in front of the piano and practicing. Of course, there’s another aspect to it — studying music, studying performance practice, studying history and music theory and whatnot. It’s an all day, every day event.

Q: Were you ever tempted to pursue a different career?

Lankov: Music is such a hard career, just because there are not concrete hours. I don’t get to go home at 5 o’clock and relax. Very often at the end of a long day of practicing, there’s still more studying to do and there’s always more practicing to do. I think that if I could possibly be happy doing something anything else, I would. But from a pretty early age, I just felt like this is what I’ve been born to do. This is what I need to do to be happy.

Trevor: There was never a question in my mind that I was going to do anything else. I remember when I was around 5 I was always saying … I wanted to play violin in the Dallas Symphony with my mom.

Q: What advice would you give to other young musicians?

Lankov: I would tell young musicians to find the music that interests them. We’re living in a really exciting time right now technologically. We can sit down in front of our computer and instantly have access to any kind of music that is going on in any corner of the world.

Q: What’s different about playing with another musician as opposed to playing alone?

Lankov: For me, it’s important that I have a balance in my musical life. In other words, I love playing the solo piano repertoire. I think it’s interesting to expose myself to the challenges of just playing by myself. It can get a little solitary and that’s why I like to mix it up playing with other musicians. There’s something really exciting to be said about collaborating with somebody else, listening to their ideas (and) their opinions and making two voices meld into one single, cohesive performance.

Trevor: When you’re playing with a pianist, there’s a much more collegial or chamber music-type feeling when you’re playing because it’s just the two of you there and you’re giving and taking. There’s all this information being passed silently between the two of you. Playing with a pianist, I would say there’s a bit more freedom, especially if you happen to get along with who you’re playing with. Jeff and I work real well together, so it’s been a real pleasure to work with him and I think we have very similar musical tastes and ideas, so we’re very compatible in that sense.

Q: What is your involvement in the “Xochiquetzal” show you are playing in at UTD?

Trevor: Akardy Fomin … ran the string orchestra at UTD from 1975 basically until 2014 when he passed away. 1975 was the same year that Robert (Rodriguez) came to UTD, so they were doing a lot of things together. Mr. Fomin premiered a lot of Robert’s pieces for violin and they worked together all the time. In addition to their friendship that they had, Mr. Fomin was also one of my dad’s first real supporters in Dallas. They became close friends. I started studying violin with him when I was about 9 and he became a real mentor, father-figure type person to me. He is the most influential person to me, musically for sure, but also just in general. All these things (tied) together when Robert started working on “Xochiquetzal.” Mr. Fomin was actually working on the violin part with him … but around March 2014 he was too sick to continue working on the piece with him so he told Robert to get in touch with me and finish working on the piece with me. So we went through the remaining movements together.