Scope of petition increased to include multiple UT System schools, calls for seven points of change 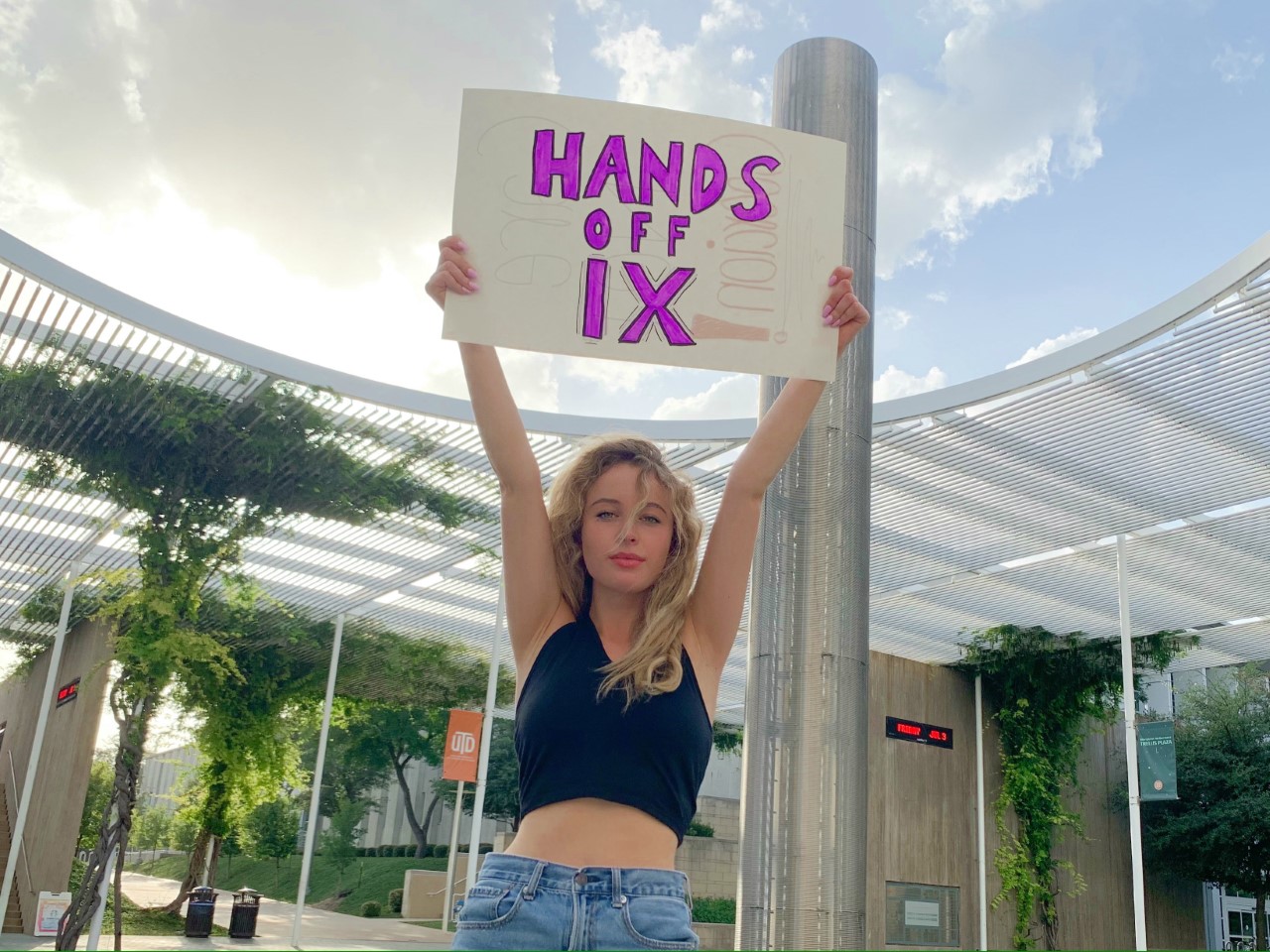 UTD’S chapter of the political organization Deeds Not Words is petitioning against the Department of Education’s changes to how Title IX is enforced on college campuses.

In 2017, the Department of Education withdrew Obama-era sexual harassment policies under Title IX. One year later, Secretary of Education Betsy Devos released a new proposal, featuring specific changes. The draft was open for public comment, receiving over 124,000 responses, and in May 2020, Devos issued the final rule, which carries the force of law unlike the previous administration’s policies, which were only guidelines.

“Too many students have lost access to their education because their school inadequately responded when a student filed a complaint of sexual harassment or sexual assault,” Devos said in a press release. “This new regulation requires schools to act in meaningful ways to support survivors of sexual misconduct, without sacrificing important safeguards to ensure a fair and transparent process. We can and must continue to fight sexual misconduct in our nation’s schools, and this rule makes certain that fight continues.”

While the regulations described in the rule are legally binding, they describe the minimum actions universities and K-12 schools must take to comply with Title IX. This benchmark is where the demands in the Deeds Not Words petition focuses on.

Neuroscience junior Lydia Grant, the Title IX director for Deeds Not Words, said its petition is asking UTD to implement guidelines in a way that is least harmful to survivors of sexual assault. Specifically, the organization calls upon UTD to commit to seven policies. The petition was modeled after a sample letter created by the political advocacy group Know Your IX.

“For starters, there’s the sixty day timeline that drags people through a lengthy investigation, and even now it’s not like a hard timeline. It’s not like your investigation just drops at 60 days, it can still get dragged past that, it’s just that without that guideline, investigation could take absolutely forever,” Grant said. “Another change is, Devos took away a lot of the Obama era guidance on the LGBTQ rights and we want UTD to continue to follow those guidelines.”

In addition to those two points, the petition states five other demands. First, it calls to maintain using the preponderance of evidence standard. This means that if there is a greater than 50 percent chance that the claim of sexual assault is true, it is considered proof of the assault. It was required by Obama-era guidelines, and was criticized for being an unfair practice that threatened due process. The May 2020 policy allows colleges to instead use the standard of clear and convincing evidence, meaning the proof must be highly and substantially more likely to be true than untrue.

The American Civil Liberties Union, which filed a lawsuit on behalf of Know Your IX and other political advocacy groups following the release of the rule, opposed this change.

Another request in the petition is to bar the use of informal resolution methods such as restorative justice and mediation, in which the Title IX office goes back and forth between the respondent and complainant for an agreement.

“Proponents of the new guidance see these informal processes as interventions that can help alleged perpetrators admit responsibility, truly understand the harm they have caused, and make amends without being expelled or suspended. They also view these informal approaches as a way to reduce the number of investigations, save money and be fairer to the accused,” an article from the American Bar Association said. “Critics, however, worry that these informal processes will lessen the consequences and repercussions of misconduct, make complaint-handling less transparent and perhaps cause administrators who are concerned about liability to pressure students to bypass formal investigations and hearing procedures.”

The final three demands call on the university to continue to promptly respond and carry out existing investigations during this global health crisis; guarantee access to interim measures regardless of where or when the discrimination took place; and create sexual misconduct procedures for investigating off campus and study abroad violence, which is not covered under the new guidelines.

“We did want to garner student support because we do think it’s important to show that students obviously care about this and a wide variety of students do,” Hruskoci said. “So now that it’s clear that student support exists, we’re going to be continuing that conversation with the Title IX office and working with them to the best of our ability to do what’s in their power to try to implement the changes we suggested in our petition.”

Campus coordinator for the UTD chapter of Deeds Not Words and political science senior Carla Ramazan said once they created this petition, members from other chapters across Texas reached out to her for advice in doing similar things.

“I’ve been contacted by people outside of (Deeds Not Words) who saw what we were doing at UTD or heard about it and were impressed by it and were looking to start similar initiatives at their schools,” Ramazan said.

Since the report was sent out, the scope of their efforts has increased. Hruskoci said they learned that policies are usually implemented after the UT System drafts a model that is the framework for what other campuses should be doing.

“Once we found that out, we realized that it may be better to target the UT System as a whole rather than just UTD so that these changes can be implemented for all universities. We have a petition now at UT Tyler, UT El Paso, UT San Antonio, UT Rio Grande, and UT Arlington that are currently gaining signatures,” Hruskoci said. “It’s really the UTD chapter (of Deeds) that is taking the lead and contacting and organizing these petitions.”

Deeds was able to reach out to other schools through Ramazan’s network with other chapters, by encouraging members to contact their friends and reaching out to sororities on other campuses. The goal for petitions at other schools is a couple hundred signatures, Hruskoci said.

“We’re kind of on two separate paths right now because even though it’s a UT System policy, UTD staff members have a say in what this policy will be, and we are hoping that our contacts and the Title IX office will be champions on this issue and will advocate for students,” Hruskoci said. “Another important thing to note is that none of our demands are an increased protection for survivors; they are all literally just preserving the current system we have in place. I also hope that in a more general sense a dialogue is created about administration and the Title IX office listening to students about what they want to see on their campus, how they envision a safe campus and an accessible process.”

The petition asks UTD to issue a statement committing to its demands by August 1. Devos’s rule will take effect on August 14.

Remote Learning: the benefits, the drawbacks