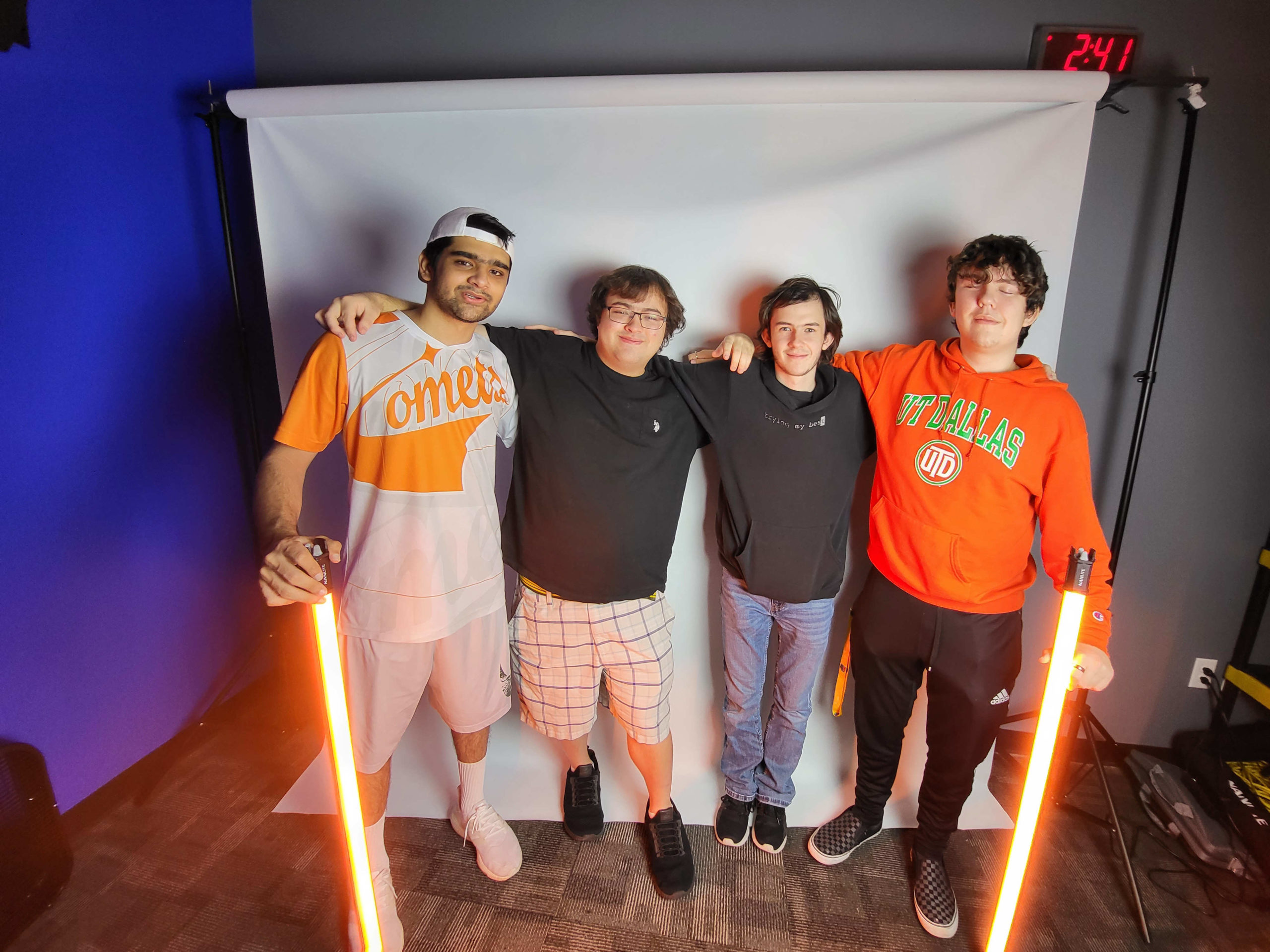 The four-man squad for Omega Strikers looks to make a splash in their first appearance. Photo by Tyler Viator | Mercury Staff

Omega Strikers is a top-down game which consists of two teams of three players, who fight to score by sending “the Core,” a large hockey puck, into the opponent’s goal. Players can choose from a cast of characters, known as Strikers. Each Striker has a unique set of abilities which can attack enemy players, move the Core, buff allies, debuff enemies, and more. On the starting line-up, the team has Daniyal “BluBlazing” Ghayasuddin playing forward, Andrew “Windoge” Harper-Hill playing mid, Noah “Amerats” Brown playing goalie, and first backup Rinaldo “Brickbat” Del Gallo playing forward. Ghayasuddin said that the team has been preparing by practicing with top opponents.

“We’ve been scrimming a lot of good teams,”Ghayasuddin said. “We’ve been scrimming fourth and fifth seeds and I think before the tournament, we have a good plan scrimming against the rank two seeds. So honestly, we’re just looking up to optimizing and looking at their VOD’s and just figuring out how they play and capitalizing on it.”

The team said that they had high hopes going into the tournament, but some high-level opponents outranked them. Brown said that the University of Central Florida will be one of their toughest competitors.

“As a group, we’re arranged on average diamond to challenger area,” Ghayasuddin said. “When we’re going against these teams such as Esports at UCF or Waterloo, they tend to have one or two Omega players — one of the top ranks in the game. But this game is all about angles. It’s all about coordination and teamwork so if we iron that out, I think we will be running smooth.”

Without coordination, the top tier teams can fall from grace because of meta shifts. Brown said that the meta shifts from the latest patch are likely to benefit UTD going into their first tournament.

“Recently the meta just shifted to prioritize less on getting kills and more on controlling the core,” Brown said. “And our team, our play style works well toward that. Lots of other teams are more geared towards getting kills and then converting those into goals. So, I think the meta is in our favor for this tournament overall.”

The team ended up dropping to Esports at NC State in the loser’s bracket after making top eight winner’s side, ending the tournament in the top eight.

“It was amazing what we accomplished with only a week’s worth of practice,” Ghayasuddin said. “We dominated on stream, went 12-0 on the first day, scoring 30 goals and only allowing three in our net … I am happy there’s a clear chance for us to rise above the ashes we laid here today. The team will be ready for future Omega Strikers tournaments!”