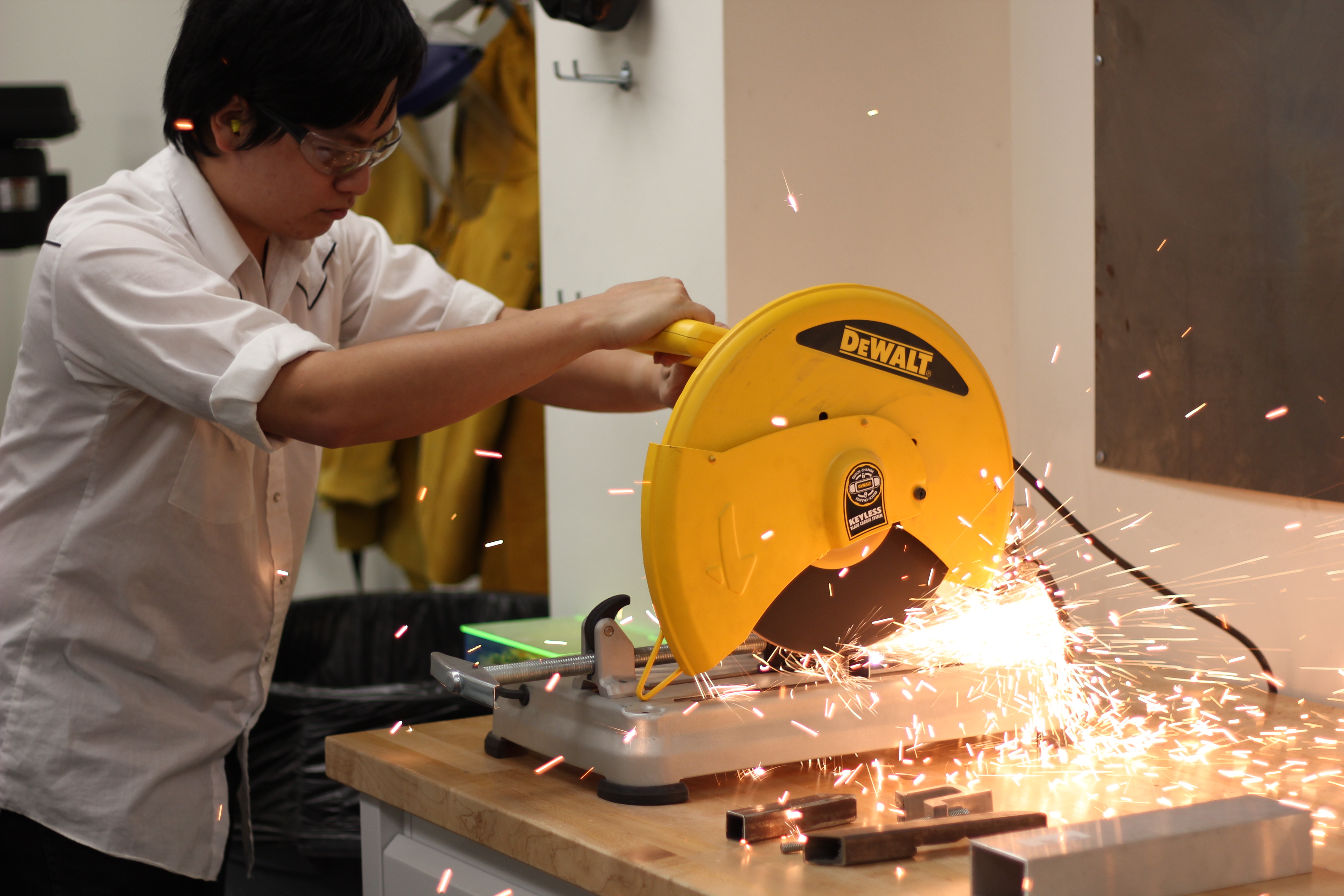 Arun Prasath| Staff Jonathan Lin uses an electric saw to build a project in the Makerspace room at Synergy Park North. The group was created to encourage students of any major to make crafts using high-tech tools, including a 3-D printer for campus use.
Archives

UTDesign Makerspace is a new organization on campus with the goals of promoting student creativity and innovation. The group offers free space along with industry grade tools and equipment for students who would like to create their own projects.

Makerspace is located in Synergy Park North, directly across the road from the residence halls. It was started as a small-scale pilot in 2014 in order to work out all of the details involved in being an official campus organization rather than just an interest group.

“We have access to 3,000 square feet inside the Synergy Park North building,” said Vice President of Makerspace Jonathan Lin. “To put it into perspective, what we have dedicated to Makerspace here at UT Dallas is the exact same amount of space that Georgia Tech has for its equivalent Senior Design Program and its equivalent Makerspace combined.”

The official campus-wide launch of Makerspace is Feb. 12.

The club provides access to a wide variety of equipment from common hand tools to machine chop tools, there is even a 3-D printer available said Secretary of Makerspace Vivien Ngo.

“This is nice because a lot of people commonly don’t have access to these tools and especially not to the level of quality that we might provide,” Ngo said. “Kit 3-D printers are very common among hobbyists, but they don’t have the kind of precision that ours might.”

Makerspace was created with the vision to cultivate creativity and innovation among students. Any student or faculty member is welcome to use the facility as long as he or she registers as an official member of the organization via the UTD OrgSync website.

“We aim to build a community, so anyone with the desire to further their interest in technology and arts (is welcome),” Lin said.

A requirement to becoming a member is the completion of two basic safety training videos online. This training is done through BioRaft and is the same credential for students conducting research in the Natural Science and Engineering Research Laboratory.

“Because of the nature of our equipment and the dangers present, we have only a one-strike policy, not a three-strike policy like you would usually find,” Lin said.

The organization’s best advantages, according to Ngo, are its affordability and convenience for students.

“It’s really cool because a lot of people are students,” she said. “They don’t generally have the funds to buy these tools, especially things like high-level 3-D printers. Also, for the engineers, a lot of (students) may not have access to these engineering tools until their senior year when they do their Senior Design Project. That’s also very limiting when they go out into the job market.”

If the organization had existed earlier, said Makerspace President Albert Aguirre, it would have positively affected his creative process for his own senior design project, a capstone project in which senior engineers demonstrate their knowledge through    practical application.

“I feel I would have had a more hands-on experience, mostly,” he said. “This would lead to better study for my classes, since I could both simulate and build the circuits, rather than just simulate them and more practical experience as well.”

Ngo said the substantial learning Makerspace offers outside of the classroom is one of the main benefits of the program.

“Learning something in class when you feel like you need to (is different)” she said. “In this kind of learning you really get to make it your own, and you get to do what you want. Students have more of a drive to do these kinds of activities.”

Makerspace offers students freedom to pursue their own creative expressions. Students may choose to work in teams to collaborate on projects, but there are no formal requirements to doing so.

“Robots, drones and radios are my main interests in maker culture,” Aguirre said. “However, I would like to see projects from all majors being completed in the Makerspace, be they engineering oriented, STEM or art-based projects.”

There are currently about 35 members; the majority are in the School of Engineering and Computer Science, or ECS. Males also comprise a larger segment of the organization.

“I feel like some girls feel like since they’re girls, they are inherently bad at using tools, but I think it’s just practice,” Ngo said. “To be honest, I also was not super into hardware, that’s why I’m a computer scientist; I thought I would hate it, (but) when I use power tools I feel really powerful. It’s really fulfilling.”

With plans to recruit members from the School of Interdisciplinary Studies, Ngo said that joining Makerspace on a whim is not a bad idea for non-ECS students.

“Since it’s free, it really lowers the barrier of entry,” she said. “You don’t have to invest so deeply to find out whether you like or hate it.”

During the February launch, the organization plans on supplying free food and having activities for their guests.

“One (activity) is called Trash to Track, and it is using recyclables and items typically categorized as junk and making a little racecar out of them,” Ngo said. “Then we’ll have them on a pinewood derby car racetrack and race them.”

There will also be a ribbon cutting ceremony with Dean Mark Spong of ECS .

As for the future of Makerspace, Aguirre has lots of hopes of it positively impacting the UTD community.

“I want to see people learning and building on their skill set so that when they do graduate, they can offer more than their degree,” he said.