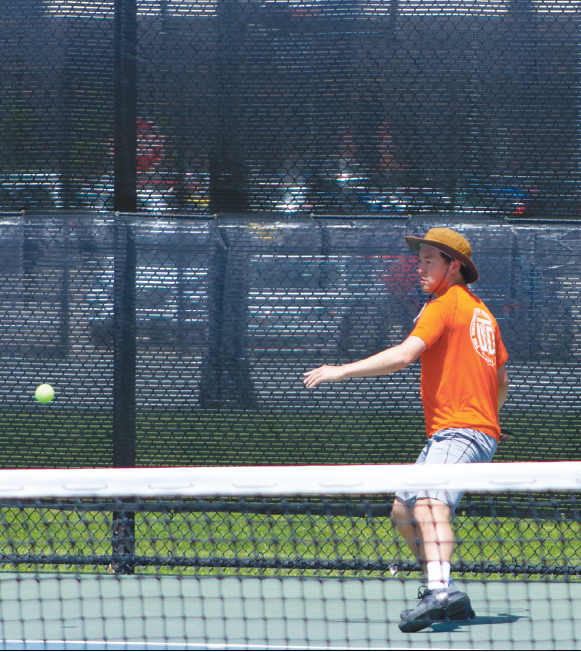 The UTD men’s tennis team recently kicked off its 2020 season. Having won the 2019 ASC Championships, the team is preparing for what players hope to be another successful run.

After 2019 victory, the Comets were voted the regional favorites in the Eastern Division III tennis conference. While he said he was happy to see the Comets chosen, head men’s and women’s tennis coach Bryan Whitt said the distinction put pressure on the team to live up to the title.

“It’s going to take a whole lot of will, although the players that were here have that experience, they have that confidence, but they also have that pressure now. Part of it is managing that, so while it is the same school, same facility, some of the same players, it’s still an entirely new season,” Whitt said. “So you almost start over in that regard, which is not a bad thing, because you want this team to go through that same journey like the other team did, and not sort of, ‘Hey, we did it last year, so we can do this.’”

The 2020 season marks the first year for UTD as members of the East region, having played in the West region since 2014. Despite facing previously unseen teams and players, Whitt said that with all the changes all teams goes through every year, switching regions wouldn’t affect the Comets’ performance.

“We were 16 teams on the East, seven teams on the West, (UT) Tyler left, so it’s seven and five. So we moved over,” Whitt said. “We’re in the middle, or the westernmost East team and the easternmost West team. So if there’s a number change, we’re like a yo-yo; we go back and forth.”

While they make their transition to the East, the Comets have the benefit of having a relatively experienced team. Although both teams graduated some of their top players in 2019, Whitt said the depth of the team meant their younger players were ready to step up and take their place.

For the players that have had to step up, their responsibilities have gone past their performance on the court. Senior Ashwin Vaithianathan said it was important for the upperclassmen to create a team mindset to help welcome in both team’s new players.

“We’re definitely practicing together and all that, but if we can hang out off the court as much as we can and just show them we’re friends and teammates, not just practicing together,” Vaithianathan said. “So I’m going to do that as someone that’s one of the older guys on the team. I’m trying to get all the young guys, you know, everyone’s coming over to my place. We’re all hanging out. Just trying to get everyone involved together and have that team mindset going into the season.”

In cultivating a team mentality among the rest of the players, Vaithianathan said he hoped to create the same feeling that helped the team win the ASC championship in 2019. As he helps to integrate new players onto the men’s team, he said he also hopes to see the team’s success continue after his graduation.

“It’s been really fun to like to see my own progress. From not being in the lineup, getting higher and higher every year, but it’s also been nice to kind of pass that on,” Vaithianathan said. “The next freshmen are coming in, and now they’re kind of seeing that our culture has gotten a lot better as a team since I’ve been here, not necessarily because of me. I’ve tried to do my part, but I think that our team is a lot more together now than it was when I first came here. So I’m hoping that these guys can keep it going once I leave.”

The Comets have been practicing together since the fall, managing a schedule including hitting and weights. Although they train as a team, junior John Edwards said each player trains differently. As a new transfer from Collin College, Edwards said he’d experienced a smooth transition onto the team, especially since he’d played against and met many of the players before. As a junior, he said he hopes to continue the welcoming team culture as a senior.

“Competing for conference and winning, trying to keep that going as the years go by can be difficult when you lose players,” Edwards said. “But you want their impact and their legacy to last after they’re gone so that you can keep that tradition going. To keep that success running on and really give it to the freshmen.”