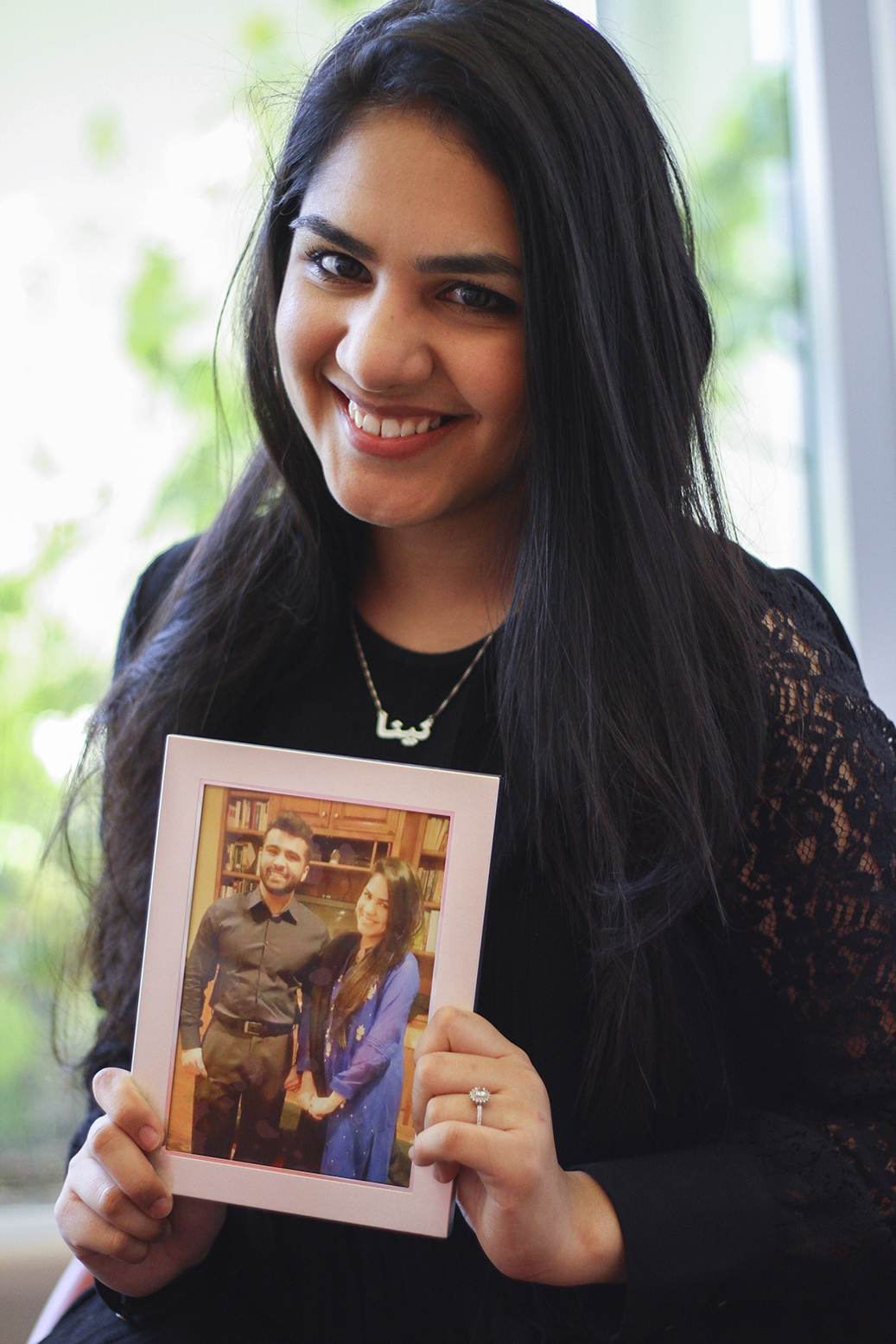 When Atif Mendha dropped down onto one knee, Nina Rafiq’s eyes widened as she realized that she might spend the rest of her life with this man she had only met once before.

A year ago on Feb. 13, Rafiq, a master’s student, met her future husband Mendha, an alumnus, for the first time.

At a younger age, Rafiq said she didn’t worry about marriage. She instead focused on her schooling and her dream of going into the medical field.

“My parents are really big on education so the topic didn’t come up for a while,” she said.

However, when Rafiq saw her cousin — who had no father and a sick uncle — struggle with the arranged marriage process, she realized that she needed to get married soon.

Rafiq described arranged marriage as being similar to modern dating. Nina Rafiq, a master’s student in the School of Management, met her fiancé, alumnus Atif Mendha, through family connections last year. She described arranged marriage as being similar to a blind date.

“(I) see it as a blind date — people set you up, but no one is going to force you to go on that second date,” she said.

Rafiq and her family began looking for a husband by asking family friends and people at their mosque. She asked her father to sort through all of the proposals for her. Once he gave his approval, she would meet with the suitor in person.

When Mendha expressed interest in marriage, Rafiq’s father had to make made sure he was worthy of his daughter.

Religion was the most important aspect for Rafiq’s parents. They wanted her husband to belong to the same sect of Islam — Hanafi — so their religious holidays and other practices would align.

Rafiq also said that she preferred someone from a Pakistani background like her so her children wouldn’t be raised in a conflicting household.

It was also equally important to her that her future husband could stay close to her family and let her continue her education.

Her father approved of Mendha, and Rafiq decided where to go to UTD to be with him. She then agreed to meet him for the first time at Café Brazil. Despite talking online before, Rafiq remembers they were both anxious to meet in person.

“He was so nervous and he didn’t know what to say,” she said. “I’m a lot more talkative than him and he’s really shy.”

After ordering their food and sitting down at their table, Mendha’s nerves got the best of him.

“He gets his coffee and I think he was trying to move closer, because we were super far apart from each other, and in the process he spilt his coffee,” she said.

She recalled doubting whether or not she wanted to marry Mendha after meeting him. While the situation was embarrassing, the coffee didn’t end up staining Mendha’s chances.

Soon after, Rafiq prayed and sought God to help make her decision to marry Mendha.

“In Islam, it is written that you have your soul mate written, and if it is the right person then God will guide you,” she said. “You may not know it at the time, but God is the best of planners.”

On Mar. 13, Mendha’s and Rafiq’s families met for the first time. After eating dinner, Mendha’s mother asked Rafiq if she loved her son. Once Rafiq said yes, the unexpected happened.

“He pulled out his mom’s ring at that moment and asked,” she said. “My sister was freaking out.”

She stepped aside for a few moments to consider the proposal. She spoke with her family about whether or not it was the right decision.

After praying and considering the proposal, Rafiq said yes that night.

“I see what my dad sees,” she said. “(Mendha) really wanted to make this work, and he was very supportive during the whole thing.”

She is also happy that Mendha shares her values and supports her career goals.

“Atif is absolutely amazing and the sweetest person ever,” Rafiq said. “I think part of the benefit was that he never had a relationship before so he really cherishes what we have now and we are getting to grow together.”

She also said she valued her parents’ opinions and decisions during the process, because they were looking for someone who would be good for her in the long run.

“I’m glad I left it to my parents because they’ve been in a relationship. They’ve done an arranged thing.  They know what qualities are needed,” Rafiq said.

Rafiq and Mendha’s wedding ceremony is set for August. Rafiq said planning a wedding while also attending school full-time is difficult, but she is looking forward to being married to her fiancé.

Even though she trusts her parents’ decision, she said the process can still be scary.

“It is nerve wracking,” Rafiq said “But I think we had enough faith in our parents to do the right thing.”

The incidence of Muslims marrying first cousins is remarkably high and likely explains a lot.

Nina writes, ““(I) see it as a blind date — people set you up, but no one is going to force you to go on that second date,” she said.” ++ And yet forced marriages are commonplace among Muslims. In fact forcing prepubescent girls to marry men in their forties and fifties is common in Islam. It’s interesting to note that Mohammed married eleven different women and approved of women as sex slaves. His eleventh wife (Aisha) was only nine when he consummated that marriage. Mohammed is considered as near to perfection as a man can be in Islam. This… Read more »

Nina writes, ““In Islam, it is written that you have your soul mate written, and if it is the right person then God will guide you,” she said. “You may not know it at the time, but God is the best of planners.”
++

If Allah is the best of planners than why is honor killings (husband against wife) so high among Muslims?

Your depiction of this entire scenario sounds disingenuous or remarkably naive to me.

I don’t understand all of this hate. You can disagree with someone’s religion, yes, but that doesn’t mean you should be bitter about it in public. Especially since this girl’s story is so personal… I’d hate to tell a personal story and have people nitpick one part of it because of high tensions from an unrelated topic. I feel this story was really neat, as we can see marriage from a different culture and perspective. So congrats on your engagement Rafiq! 🙂

The Mercury
The Mercury publishes news, opinion and feature articles of interest and importance to the UT Dallas campus and community, with primary emphasis on news that most directly and immediately concerns students.
wpDiscuz
4
0
Would love your thoughts, please comment.x
()
x
| Reply