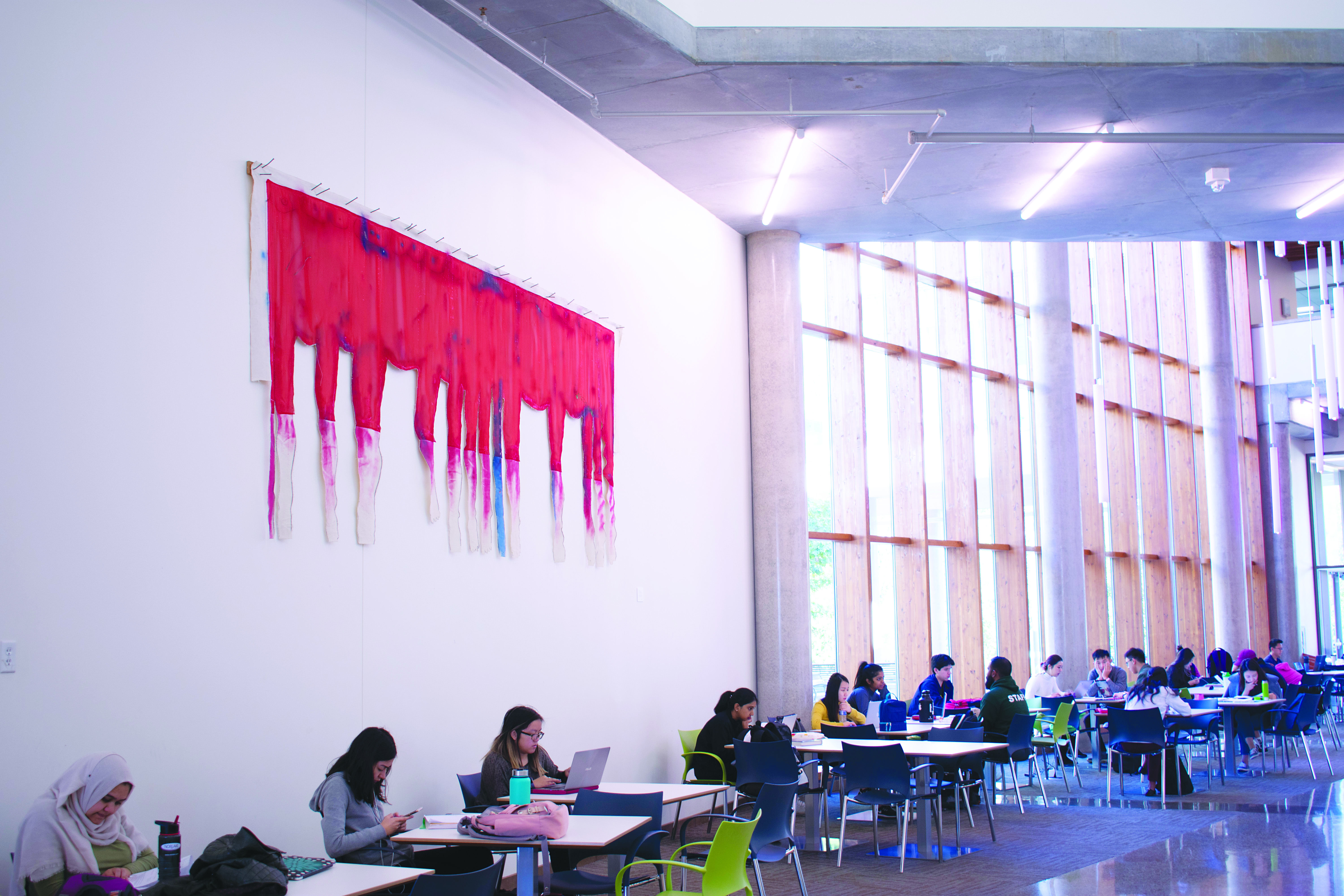 Nine months ago, a large collection of contemporary and abstract art was installed throughout the JSOM building. Since then, the collection — named for its donor, Joan Davidow — has been the subject of numerous staff, faculty and student discussions, a thwarted call for removal and the loss of two of its pieces.

The collection represents the bulk of Davidow’s personal collection. Davidow first donated the collection to UTD in 2014. It was originally installed in the ATEC building but was later moved into storage to make room for student work. In 2017, Diane McNulty, the associate dean of external affairs and corporate development for the School of Management, petitioned to have the collection installed throughout JSOM facilities.

In an Oct. 10 meeting of the Staff Council, an anonymous complaint cited concerns that a piece in the collection depicted violence against women and objectification of the female body, according to minutes from the meeting.

The piece, titled “Joni’s Chorus Line,” is a large textile wall hanging by artist Hiram Williams. It’s one of several pieces by Williams in the Davidow collection. The piece occupies a prominent space placed in the atrium of JSOM II, across from the undergraduate trading lab.

Maria Reyes, an administrative project coordinator in JSOM and a member of Staff Council, said she heard similar sentiments echoed among multiple staff members throughout JSOM and had concerns about what the students thought of the art.

“(‘Joni’s Chorus Line’) hangs in front of the undergraduate lab, so it’s exposed to the youngest of the JSOM students,” Reyes said. “As a mom, that’s something I worry about — what message is being conveyed to these kids?”

Reyes said she would want the collection to be moved to a separate gallery area with more guidance and context presented alongside the pieces. Currently, each piece is accompanied by a small plaque containing a few questions. Davidow, a former art educator and museum director, said she suggested the format as a means to help students think more deeply about the art.

Gaurav Shekhar is a program manager and lecturer for the School of Management and member of Staff Council.  Shekhar said he hoped the curator considered the international perspective of the viewers.

“We take pride in calling ourselves a melting pot of cultures,” Shekhar said. “But what is appreciated by a certain culture might be offensive to someone else. There’s a painting in the dean’s office that looks like it has a stain on it. In India, where I’m from, it looks like betel nut juice — it looks like a mark of disrespect.”

The painting Shekhar described is titled “Surprised Man.” It features a prominent splash of brown, as if someone has suddenly spilled something onto the canvas. Another piece by Williams, it will be moved into an open space in JSOM next year.

Two pieces from the Davidow collection have also gone missing since their installation in early 2018. Kenneth Mackenzie, a lieutenant at UTD PD, said that he cannot recall anything like these cases in his nine years with the department.

“You have to remember this is a school of 32,000 people,” he said. “We’ve had furniture sitting in the hallway, and all of a sudden it goes missing but turns up later in somebody’s office. For all we know … some staff member could have (the art) hanging up in their office on display, thinking it looks better in there.”

Mackenzie said that going forward, UTD PD’s crime prevention officer should be contacted whenever there’s a valuable asset installed in a building so appropriate security measures can be taken. He said to his knowledge, the officer was not contacted ahead of the installation of the Davidow collection.

One of the missing pieces is a small landscape called “Texas Sky.” Mackenzie said the department believes that two unidentified students removed the painting from the wall in May 2018. Security camera footage shows the students placing the painting atop a nearby trashcan and walking away. Later, footage shows the painting mistakenly discarded by a member of the custodial staff.

The other missing piece is called “Crown of Thorns.” The donor, Joan Davidow said she noticed the piece was missing in July 2018. Mackenzie said the last video footage UTD PD has of the piece dates to March. He said the motives in both cases are unclear.

While there have been discussions about the collection in Staff Council, there are currently no plans to alter the installations. Ravi Prakash, a professor of computer science, was present at the Staff Council meeting as a representative from the Academic Senate.

“I don’t think the Staff Council was talking about censorship or removing paintings but about providing context, so students would understand the art as something other than a random image,” he said.

Prakash said there was a secondary concern with some of the staff members who had offices in JSOM.

“It’s your workplace, and you have to go there every day,” he said. “The message in these paintings is somewhat unsettling — profound, but unsettling — and they had no say in what was displayed where.”

Prakash said he understood the concerns but that ultimately, people come to a university to broaden their horizons.

The collection has sparked conversation in classrooms as well as among faculty. Kristen Lawson, a professor of business communication, said every semester, the topic of the Davidow collection comes up.

“I used to have an assignment in one of my classes that involved filming what we call an elevator pitch,” Lawson said. “I didn’t tell the students where to go (to film), but I noticed a lot of them naturally gravitated towards the art installations we have in presenting themselves aesthetically.”

Gordon Sheehan, a finance senior, said he spends a lot of time in JSOM and around the trading lab, where “Joni’s Chorus Line” hangs.

“When I first started looking at it, it made me a little uncomfortable,” said Sheehan. “It’s not my favorite, but it’s nicer than having just the plain wall, for sure.”

The collection was installed toward the end of Sheehan’s time at UTD. He said the aesthetics of the JSOM building have changed dramatically since he started as a freshman.

“When I’m on campus, I’m usually in work mode and I don’t really stop to smell the flowers,” Sheehan said. “But the art here makes this building stand out more than a typical business school.”

Information technology management senior Sahar Moshtaghiaragh said she took note of the art as it was installed throughout the year.

“I used to like to sit (in one of the student lounges), but since (some nude paintings) were put up over those benches, I’ve stopped sitting there,” Moshtaghiaragh said. “What’s the relation of that naked woman to me, as a business student?”

Moshtaghiaragh is an artist and occasionally teaches art. She said she prefers to work mostly in realism rather than abstract art.

“Some of these paintings, I have to think, ‘What is this?’ I don’t see a very beautiful thing,” Moshtaghiaragh said. “As I’m an artist, I feel we could have things that really make the building more beautiful, not weird.”

Shekhar said he has concerns that some investors or recruiters might take the art the wrong way. As part of his job as program manager, Shekhar helps to recruit corporate engagement programs to campus.

“It’s not just students (who walk these hallways). We have senior industry (recruiters) who come to JSOM almost every day,” Shekhar said. “What if someone really can’t appreciate art and thinks the art is average? It might translate to thinking that the students are average too. It is just not good for the reputation that we have.”

Diane McNulty is the associate dean for external affairs and corporate development in the School of Management. She was responsible for organizing the transfer of the collection from ATEC to JSOM.

“There are a couple of management schools in the U.S. that have very nice art collections, and you notice this is a new trend in management schools,” McNulty said. “If you look at corporate moves to different cities, many corporations are moving to be close to arts facilities. There’s a real appreciation when a community has arts as a centerpiece of the culture.”

Davidow said she’s happy that people are talking about the collection — whether it’s good or bad.

“That’s the point of art,” Davidow said. “To get people talking.”

Amazon’s second headquarters likely to not be in Dallas 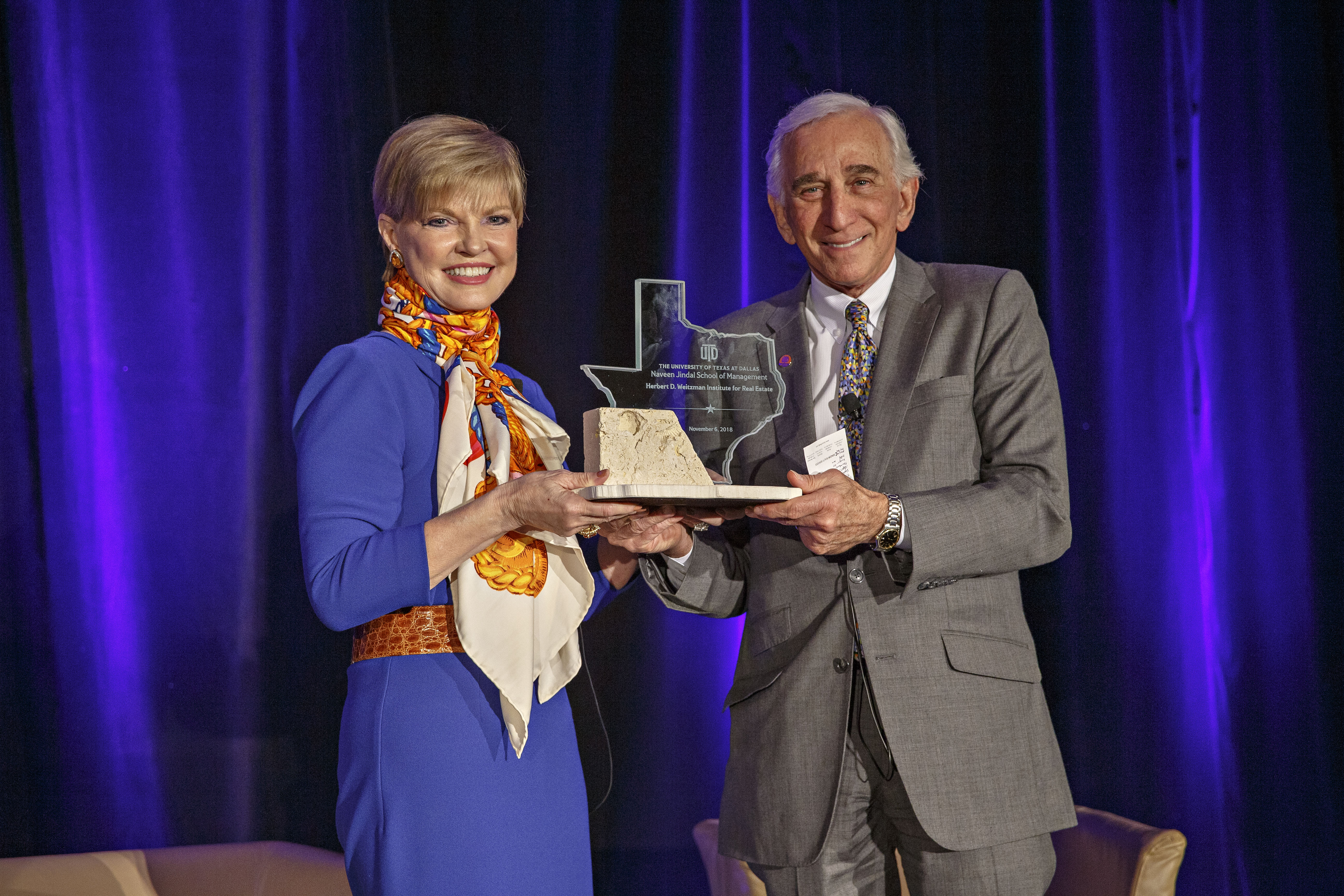